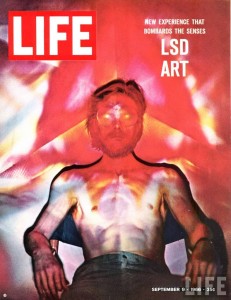 A mind-twisting exhibit at the Riverside Museum, formerly at 310 Riverside Drive/103rd Street, makes it on the cover of a national magazine. But not everybody would enjoy the trip.


WARNING The article contains a couple spoilers about last night’s ‘Mad Men’ on AMC. If you’re a fan of the show, come back once you’re watched the episode. But these posts are about a specific element of New York history from the 1960s and can be read even by those who don’t watch the show at all. You can find other articles in this series here.

Sure, it’s 1966. I thought maybe Peggy Olsen might be the one to trip the light fantastic. (She was otherwise engaged this week.) But I never expected hallucinogenics to materialize as they did on last night’s ‘Mad Men’. After a staggeringly serious dinner party narrated with empty philosophical conversation, Roger Sterling and his wife are invited to take the drug LSD by their host. Far from the dorm rooms and basement clubs of Greenwich Village where one might expect such experimentation, this evening of psychedelia was presented as a drawing-room intellectual exercise, with serene music unspooling from a reel-to-reel and no object more trippy than a mantel mirror.

Lysergic acid diethylamide, which I doubt can actually be said while experiencing its effects, was considered a mind-opening tool for some early psychiatrists, laying bare subconscious feelings and forcing the user to confront difficult issues in a surreal environment. By the mid ’60s, its leading advocate was Timothy Leary (below), a psychologist who had studied the benefits of psychedelic drugs to explore the mental capacities. Today we might naturally lump him with the trappings of ’60s counter-culture, but in 1966, with the parameters of psychiatry still in flux, his experiments also appealed to intelligentsia. 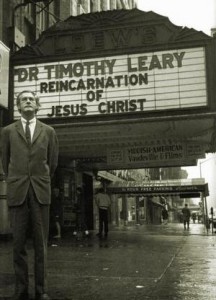 An article in March 25, 1966, LIFE Magazine laid out the details of the drugs in almost an introductory fashion. “A black market dose costs only $3 to $5. But that’s enough to send a person on a 10-hour ‘trip’.”

The same article also underscored a growing fear: “A few pounds of it dumped into the water supply of a major city would be enough to disorient millions.”

The federal government had been concerned of this supposed conspiracy as early as the 1950s, fearful that Russians might pollute New York’s water and “turn drug-addled American citizens against their own government.” [source] Of course, the CIA itself experimented with LSD during this period with its covert Project MKULTRA, which conducted experiments in New York during the mid-50s, using prostitutes and junkies they found in local bars in Greenwich Village. An experiment performed on CIA operatives themselves led one agent in 1953 to leap from a window at the Statler Hilton, today’s Hotel Pennsylvania. (Or was it murder?) 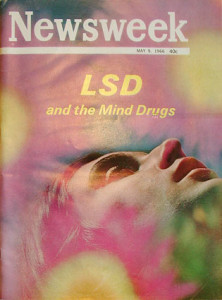 By the 1960s, the drug had become a virtual entrance exam for New York’s blossoming counter-culture music scene, or so the more hysterical believed. “In New York, San Francisco and Los Angeles, a girl just off the bus from Boise can find it quicker than the YWCA merely by asking around for ‘a trip’,” warned Life Magazine.

The fear of an unwitting populace overtaken with LSD only grew with the 1960s, and this time, some thought it was New York’s counter-culture rebels itself who may be wielding it.  A 1967 journal opined on the urban legend with all seriousness. “[A] single ounce will provide fuel for 300,000 trips, reported one periodical, and it is believed that a few pounds dumped into the water supply of New York City would disorient the nearly 8,000,000 residents.”

Perceptions of LSD were slowly divorced from its supposed therapeutic qualities, especially as the drug soon found itself as the subject of films like Roger Corman‘s ‘The Trip‘ and ‘Enormous Midnight‘, where town water supply is poisoned with LSD and turns its citizens into orgiastic zombies. In New York, LSD entered the club world; hallucinogenic mid-60s destinations like Cerebrum and the Electric Circus (which became Andy Warhol‘s preferred spot in 1966) seem almost conceivable without it.

New York legislators quickly vowed to outlaw the new drug. Bellevue Hospital reported over 200 new patients affected by the drug. In April 1966, two local crimes energized the press: a Brooklyn girl accidentally ingested a sugarcube coated with LSD, and a week later, a ex-mental patient killed his mother-in-law, allegedly under the influence of the drug. With the Stagger-Dodd bill in 1968, the possession of LSD became illegal in the United States.

While that effectively ended the living-room therapy sessions such as the one experienced by Roger Sterling, the drug, now underground, would increasingly influence all aspects of New York bohemian culture.

From the Cerebrum club mentioned above:

Pictures courtesy Newsweek and Life Google Images. For more information on the CIA’s LSD experiments, you might be interested in watching this video.


If you’re watching ‘Mad Men’ when it broadcasts at 10 PM EST, then follow along with me on Twitter at @boweryboys. I’ll be giving a live fact-Tweeting, dropping little factoids about the events being depicted on the show

Yay! I’m so glad they’re showing an LSD trip on such a popular TV show. We need some good press, eh?