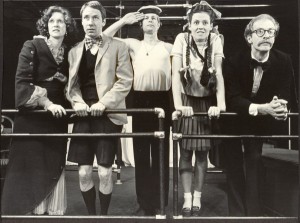 Queen of the world: Weaver sets an uncharted course on a small SoHo stage.

Perhaps you are as confused as I am by the picture above, one that appears to put the lovely young Sigourney Weaver‘s face upon the body of a child. Ah, the magic of the theater! The future film star was in her late 20s when she joined this peculiar production of the ‘Titanic‘ tragedy, written by her friend and frequent collaborator Christopher Durang.

The bizarre one-act made its debut at the tiny Midtown theater before making a proper off-Broadway launch at the Van Dam Theatre (today’s SoHo Playhouse) in May 1976. Far from concerning itself with the eventual tragedy, Durang’s comic-farce is a sex romp which eventually pairs up provocative combinations of the show’s cast, a ribald smorgasbord of sexual fluidity. 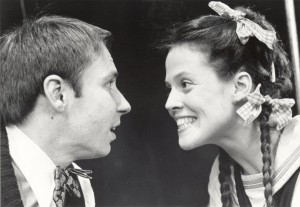 Weaver, playing the role of Lidia, transforms into a variety of different women, including the daughter of the captain of the Titanic. Critics proclaimed her the “principal attraction” of the unusual play. “She begins in pigtails and tiny skirt as a sexy Shirley Temple and ends as a predatory black widow in deep decolletage,” said Times critic Mel Gussow.


This was not the only doomed ocean liner lampoon by Weaver and Durang! Inserted astride ‘Titanic’ was a Brechtian cabaret co-written by the pair, called ‘Das Lusitania Songspeil‘. In 1980, an expanded version of this randy show made its debut on the boards of the Westside Theater in Hell’s Kitchen, a late-night wintertime smash that earned the pair Drama Desk nominations.

Keep in mind this is a few months after the release of her breakthrough film ‘Alien’, whose sequel (which she also starred in) was directed by James Cameron, who would also find later inspiration on sunken ships. Although I think most of us prefer her as a Hollywood star, Weaver’s off-Broadway credits were so impressive by this time that New York Magazine referred to her in 1981 as “just about the best all-purpose actress in town.”

Durang’s ‘Titanic’ — which he himself considers a “really difficult play” — is sometimes revived on college campuses. Broadway would eventually embark on its own ‘Titanic‘ in 1997, an expensive musical production by Maury Yeston and Peter Stone that would debut at the Lunt-Fontanne at 205 W. 46th Street*. Although dogged with early technical difficulties and critical skepticism that would parallel the issues faced by “Spider-Man: Turn Of The Dark,” it became a modest hit, thanks in part to the film version directed by James Cameron.

*Currently home to ‘Ghost’ a musical based on a film.

Pictures above are courtesy Christoper Durang, a website that has lots more information about this curious play.

Hi guys. As the saying goes, ‘never let the facts get in the way of a good story’. I think you’ll find that it was Ridley Scott who directed ‘Alien’ in 1979. James Cameron made ‘Aliens’ in 1986.
Despite this slight faux pas, a very interesting read and, wow, doesn’t she look young!

Thank you, that was a SHAMEFUL error on my part, given my appreciation of those movies. (I even love Alien 3.) I will atone for my error by watching Avatar again.

You are forgiven – I normally am completely agog at your knowledge of my favourite city!
However, I think it would be more appropriate if you watched ‘Blade Runner’ – a far superior movie IMHO! Also, who wouldn’t want to watch a film that was based on a novel with the wonderful title ‘Do Androids Dream of Electric Sheep’?