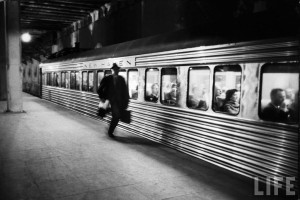 Oh, the mundane ritual of the daily commute! Of all the conformities of modern living, what is it in particular about the commute along the New Haven line — from Grand Central to points of suburbia along the south shore of Connecticut — that must drive the perpetually frustrated Pete Campbell to the edge of insanity?

In past ‘Mad Men’ episodes, we’ve seen the eager and ambitious adman strive for the trappings of ’60s urban success. He’s achieved a certain degree of material status, from a beaming, pregnant wife to a small but lovely home in Connecticut, equipped with a monstrous (some might say coffin-shaped) hi-fi stereo console. But the banality of a regular commute, robbed of privacy and forced into polite chatter — with the same insufferable people, day in, day out — has forced Campbell into taking driver’s education courses with teenagers. 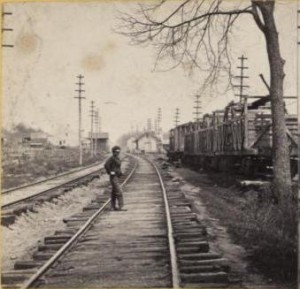 The New Haven line has been a popular transportation route almost since the advent of the railroad itself. First laid and operated in 1848, Appleton’s was proclaiming a decade later that the shoreline railroad was “the most expeditious way between New York and Boston,” linking the Connecticut city with Williams Bridge in the Bronx (pictured at left, from 1865, courtesy NYPL). From there, a connecting track, shared with the Harlem Railroad, took trains directly down to the train depot at 27th Street and Fourth Avenue. When city laws forced the depot up to 42nd Street, that old depot became a storage shed and, later, the first Madison Square Garden.

Few urban professionals attempted daily commutes to and from New York until the early 20th century, when post-war lifestyles, affordable automobiles and an expensive and overcrowded city facilitated an exodus to the surrounding areas. By 1950, the suburbs were such an entrenched place — a lifestyle unto themselves, with unique social requirements — that people even began speaking of the exurbs, communities even further outside the chain of traditional suburbia. “[T]he suburbs are the first 25 miles out; the ‘exurbs’ are the next 25 miles out,” according to author Irving Lewis Allen, and initially appealed to the most wealthy professionals from “advertising, broadcasting and publishing.”

We can thank city planners like Robert Moses for much of this change, obsessed as he was with highway building. But new roads alone couldn’t facilitate the move to suburbia. Mass transit was required to provide a convenient and cost-effective alternative for the ‘second wave’ suburbanites — those aspiring professionals wishing the emulate the lifestyle behaviors of their bosses without the paychecks to secure it. People, say, like Pete Campbell.

Above: A whimsical graphic from a 1966 New Haven Railroad timetable attempts to distract its passengers.

Unfortunately, the massively unprofitable New York, New Haven and Hartford Railroad, no longer just a long-distance passenger train service, was never fully capable of handling the thousands of commuters traveling to and from the city. Once considered ‘profitable, clean and punctual’ according to Robert Caro, the line was bankrupt by the mid-1960s, operating overcrowded, less-than-comfortable trains solely on federal money by 1965. Some considered it worse than even the crippled, dysfunctional Long Island Railroad.

The New Haven was such an undesirable property that the newly merged New York Central Railroad and Pennsylvania Railroad (aka Penn Central) was literally forced to take possession of the line in 1968 by the Interstate Commerce Commission. New York Governor Nelson Rockefeller was especially concerned that a deterioration of the New Haven line would create an traffic burden which would reverberate through the entire northern New York City-Westchester County corridor.

Oh, things would only get worse for the New York area railroads in the 1970s! So I hope Pete’s taking copious notes in his driver’s education classes and that those gruesome Signal 30 films are hitting home.

1 reply on “‘Mad Men’ notes: The numbing horror of the New Haven line”

Regarding the ‘Signal 30’ video, I grew up in Ohio in the fifties and those graphic scenes were common all over the state. It was exactly like they showed, no staging like they would do today. I survived a few of those big ones. The whole accident scene was handled different than today. You can’t fix stupid drivers but the cars are much safer today.