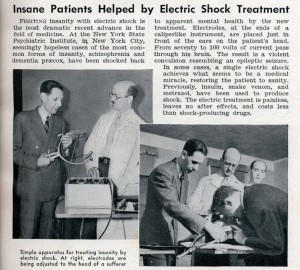 
WARNING The article contains a couple spoilers about last night’s ‘Mad Men’ on AMC. If you’re a fan of the show, come back once you’re watched the episode. But these posts are about a specific element of New York history from the 1960s and can be read even by those who don’t watch the show at all. You can find other articles in this series here.Â

And so, in the end, we find that the biggest historical influence within the fifth season of ‘Mad Men’ wasn’t a race riot, a Southeast Asian war, a counter culture movement or a reduced hemline. It was Sylvia Plath.

(This article is so spoiler-y, that I’m placing the rest of it after the jump)
Â 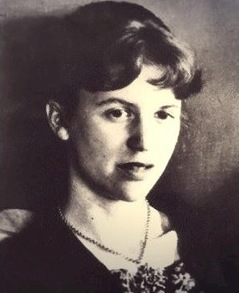 The tortured poet is not mentioned a single time in the final episode. (Although she was clearly nodded to in the episode entitled ‘Lady Lazarus‘.) But the themes of her only novel, The Bell Jar, partially set within the publishing world of New York, unfurled throughout this entire season of ‘Mad Men’ in a variety of ways, manifesting in the fragile, even scarred, mentality of several characters. The novel, originally published in 1963 under a pseudonym, was finally released under her own name in the same year the fifth season of ‘Mad Men’ ends — 1967.

The season evokes Plath not only literally (with the suicide of Lane Pryce) but figuratively among the psychic states of the ‘Mad Men’ women, dealing with anxieties brought about by male chauvinism (Peggy), sex (Joan), career (Megan) and body image (Betty). Then there’s the abuses upon Sally Draper, presented with several clumsy introductions to adulthood this season, enough to drive her to the prescription drugs her grandma so inappropriately gave her. 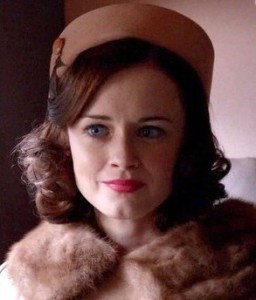 Episodes this season have plunged abstractlyÂ through the recesses of the mind — chemical experimentation (with LSD), spiritual enlightenment (with the Hare Krishnas), even feverish hallucinations (Don Draper‘s strange murder evening). Â And finally, bluntly, a most surprising cruelty — the submission of one character to electroshock therapy, a drastic antidote to her ‘feeling blue’ that literally leaves her blank.

That character, Beth, pines for some reason for Pete Campbell, who’s been stubbornly transplanted to the suburbs, and it’s that attraction that indirectly get her admitted into a mental ward. The actress who plays Beth, Alexis Bledel, is most famous as the character of Rory on ‘Gilmore Girls‘, a character possessed by the work of Sylvia Plath. Of course, Plath also went through electroshock therapy for depression, just like Bledel’s character Beth. A rare pop-culture Mobius strip!

By 1967, submitting a loved one to this sort of treatment would have been considered a form of abuse in the public imagination, if not legally so. (The first lawsuits against shock treatment wouldn’t arrive in the courts until 1975.) But for decades, it was the catch-all treatment for almost any psychological problem.

Previously, the hot medical solution in the 1930s for certain mental illnesses was insulin therapy (putting patients in a comatic state), practiced in various hospitals in New York, including Bellevue Hospital. Electroconvulsive therapy (ECT), which debuted in Italy in 1937, made insulin therapy basically obsolete when it was introduced into the United States in 1939Â at the New York State Psychiatric Institute (below). 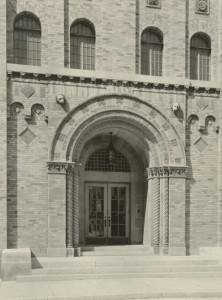 From its patient care facilities on 1051 Riverside Drive, the Institute displayed a technology that seemed to have unlimited application to many mental illnesses thought untreatable. Modern Mechanix heralded its use on insanity, “a single shock achiev[ing] what seems to be a medical miracle, restoring the patient to sanity.” It became “psychiatry biggest fad,” despite such obvious side effects like memory loss.

According to authors Edward ShorterÂ and David Healy, two-thirds of all the patients at the Institute were there to receive ECT. It became a sort of mecca for electroshock, with doctors from around the country coming to observe the treatment.

ECT reigned as the primary form of treatment for depression for almost two decades. However, with the undeniable violence suffered upon a patient who received the treatment — and the fact that well over half of ECT patients were women — most considered it a barbaric practice by the 1960s. Ken Kesey‘s ‘One Flew Over The Cuckoo’s Nest‘, published in 1962, accelerated public distaste with the treatment and was pretty much responsible for its near-elimination by the time the film version, starring Jack Nicholson, was released in 1975.

Electroconvulsive therapy has returned in recent years as a last-ditch therapy for severe depression and certain kinds of catastrophic mental illness. But I’m quite sure that having an affair with Pete Campbell would not have been placed in any of those categories today. What we saw in the season finale was yet another example of the abusive power men sometimes wielded over women, a theme ‘Mad Men’ will most likely continue to visit well into its final season.