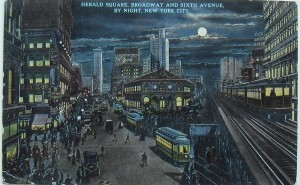 Herald Square at night, 1910, with the flurry of shoppers, the churn of printing presses, the clanking and soot exhaust of the elevated train, the rush of the streetcar. The theaters, the drinking, the dancing. (Courtesy the blog Ajax All Purpose Blog)

PODCAST Welcome to the secret history of Herald Square, New York City’s second favorite intersection — after Times Square, of course, just a few blocks north. But we think you may find this intersection at 34th Street, Sixth Avenue and Broadway perhaps even more interesting.

This is a tale of the Tenderloin, an entertainment and vice district which dominated the west side of midtown Manhattan in the late 19th century, and how it abutted the great cultural institutions that soon became attracted to Herald Square, from cheap aquariums to New York’s greatest opera house. 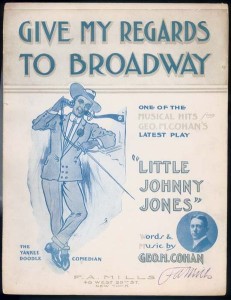 By the 1890s, newspapers arrived to the area, including the one that gives Herald Square its name. A remnant of the New York Herald Building still sits in Herald Square and is the cause of some serious conspiracy. (Especially if you’re afraid of owls!) But the Herald wasn’t the only publication that got its start here; in fact, one of America’s most famous magazines began in a curious office-slash-bachelor apartment facility just close by.

The department stores came at the start of the 20th century, and we bring you the tales of Macy’s, Saks and Gimbels, not to mention their later incarnations, the Herald Center and the Manhattan Mall.

ALSO: Where on 32nd Street were crazy parties featuring a who’s who of New York’s greatest freak show performers? Where did a silent fim stunt man meet his end? And where in New York can you get the best in Korean pop music?


The bawdy Haymarket dance hall, at 30th Street and Sixth Avenue, in a magnificent painting by John Sloan (1907) that conjures up the glamour and winks at its secret pleasures. Several of Sloan’s works depict places located in the Tenderloin, a wide area of entertainment and vice west of Broadway. The original painting hangs in the Brooklyn Museum. 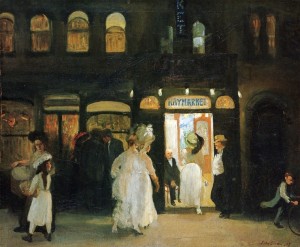 The Great New York Aquarium of W.C. Coup, bringing sea creatures to the corner of Broadway and 35th Street. (NYPL) 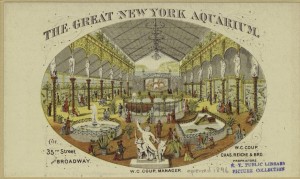 The character of Broadway between the intersections of 34th Street and 42nd Street (before they were known as Herald Square and Times Square, respectively) was changed forever with the construction of the Metropolitan Opera House, a vanity project for New York’s new wealthy class. It was all for show; there were plenty of loges for the rich, but so little backstage room that set pieces were stored on the street. (NYPL) 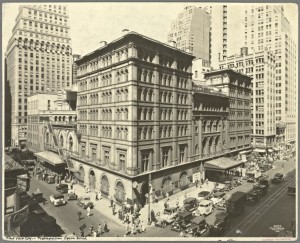 The front of the New York Herald building, with its ornate clock face and Minerva statue. Please note the owls on the corners. (NYPL) 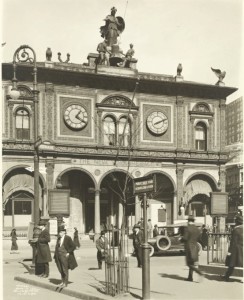 The two most dominant structures in Herald Square in the 1890s — the Sixth Avenue Elevated and Stanford White’s Herald building. “Running presses seen from street.” (NYPL) 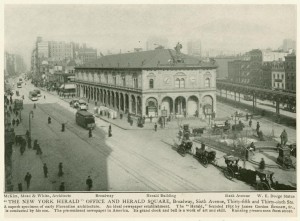 The Elevated and the Herald Building from another angle in 1936, with the new addition of Macy’s — and the little building which prevented Macy’s from taking up the entire block! Today, that’s still a Sunglass Hut. You can also see that the back of the Herald offices has already been demolished and replaced with an office building. The front would survive a bit longer and then too would be destroyed. (NYPL) 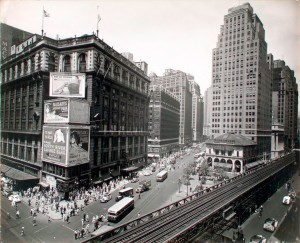 A view of Greeley Square, with the elevated to the right. This building is the Union Dime Saving Bank. The counting offices of the New York World were on the ground floor, however I’m not certain if they are there in the year this picture was taken (1899).

Now here’s a mystery for you — this is Greeley Square, named for the statue of Horace Greeley which was definitely installed in 1894. Hmm, but where is it? 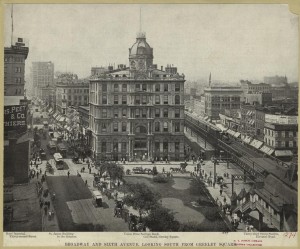 The Hotel McAlpin, at the southeast corner of 34th Street, the largest hotel in the world when it was built in 1912! Happy 100th anniversary to this accommodation, pivotal in New York City history. 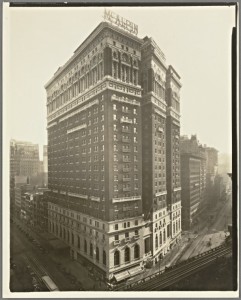 And an image for the holidays, from the 1940s! Courtesy Life Magazine 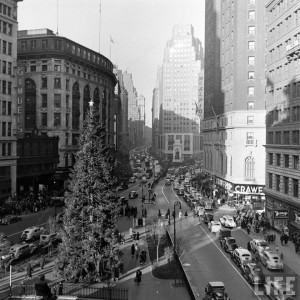 2 replies on “A whirlwind tour of Herald Square: More than just Macy’s, the intersection of publishing, theater and debauchery”

Interesting history but as usual, the fact that the area was once African Broadway is eithr hidden from you as well or you choose to bypass this fact. Blacks have been in this city for 400 years and once livd on that spot you visualky portray as all White.