In 1922, the New York Tribune envisioned what it would be like if a meteor hit downtown Manhattan.

The article is a real scare piece on the potential of meteors destroying life on Earth.  It references the American Museum of Natural History‘s own meteor, Ahnighito, brought to the institution by Robert Peary in 1904.  As I mentioned in my post from 2010, that famous rock was of no particular threat and in fact was itself pummeled by the jackknifes of rowdy young children.

“Ahnighito … had it reached Earth this year instead of ten thousand or more might have shattered the Woolworth Building,” writes Boyden Sparkes in the Tribune article.

Unfortunately, as you’ve probably noticed, this image also accidentally recalls other, more recent tragedies. You can find the original image at the Library of Congress (read it here) 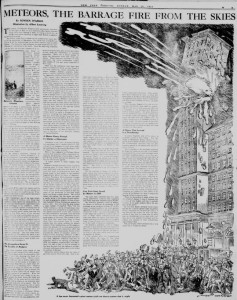 Just in case you think the recent meteor in Russia is somehow an aberration and a true sign of the times, you should remember that meteors have already landed much closer to home  here.   For instance, in 1922, a meteor almost crashed into Asbury Park, NJ!