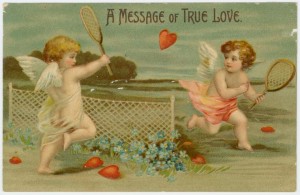 Yes, you read that correctly.  This form of socially acceptable violence was popular in the colonial era and extended well into the early 1800s.  It derives from a tradition practiced as part of an early Dutch holiday known as Vrowen Dagh* (or Woman’s Day) and was likely popular among the young ladies of New Amsterdam, New York’s precursor.

According to the 1850 history ‘Rural Hours’ written by Susan Fenimore Cooper (daughter of James), “[e]very mother’s daughter … was furnished with a piece of cord, the size neither too large or too small” and fitted with a “due length left to serve as a lash.”  Cooper elaborates on this playfully violent custom: 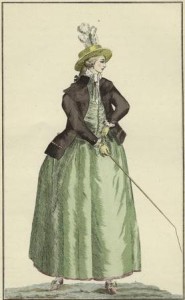 “On the morning’s of this Vrowen Dagh, the little girls — and some large ones, too, probably for the fun of the thing — sallied out, armed with such a cord, and every luckless wight of a lad that was met received three or four strokes from this feminine lash.”

Young men of marrying age dashed from place to place, fearful of being flirtatiously struck in this whirlwind of flying rope.

“Every lad whom they met was sure to have three or four smart strokes from the cord bestowed on his shoulders,” writer Gabriel Furman recalled in 1875.  “These, we presume, were in those days considered as ‘love-taps’, and in that light answered all the purposes of the ‘valentine’ of more modern times, as the lasses were not very likely to favor those with their lashes whom they did not otherwise prefer.”

There obviously seems to be some statement about domestic violence in this practice.  At one point, injured males suggested the following day be a “Men’s Day,” allowing men to chase women around with these braided whips.  But they were told “the law would thereby defeat its very own purpose, which was, that they should, at an age and in a way most likely never to forget it, receive the lesson of manliness — he is never to strike.” [source]

At some point in New York, this custom actually did blend with the English custom of Valentine’s Day, and young women of the colonial era continued enjoying this frivolous custom — in fact, well into the early 1800s.  It blessedly vanished by the mid-19th century, replaced with the more recognizable gesture of sending valentines through the mail.

“We heard that 20,000 [valentines] passed through the New  York office last year,” Cooper writes in 1850.  But it seems the writer had grown tired of even this custom. “They are going out of favor now, however, having been much abused of late years.”

*I think the actual Dutch word would be Vrouwendag but I’m preserving the original spelling from Fenmore and Furman’s text. An 1832 Dutch dictionary says Vrouwendag means ‘Lady Day’!

Colbert addressed the roots of this last night on his show, the Roman festival of Lupercalia held in mid-February. Wikipedia had this quote from Plutarch:

Lupercalia, of which many write that it was anciently celebrated by shepherds, and has also some connection with the Arcadian Lycaea. At this time many of the noble youths and of the magistrates run up and down through the city naked, for sport and laughter striking those they meet with shaggy thongs. And many women of rank also purposely get in their way, and like children at school present their hands to be struck, believing that the pregnant will thus be helped in delivery, and the barren to pregnancy.