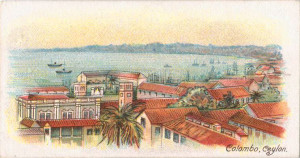 Greetings from Columbo, Ceylon, one of the many glamorous destinations you’ll visit in Matthew Goodman’s new book. 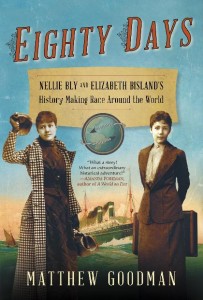 One under appreciated facet of the Gilded Age is Western civilization’s almost addictive need to push its innovations past their upper limits within the framework of a literal competition — not just in mere quest for improvement, but in a tangible victory over its lessers.  Beauty, in a machine, meant winning.

The value of human life became secondary in the furious race of locomotives crossing vast plains of the United States, or of cross-country automobile competitions over terrain hardly suited for rubber tires, or later the famed air races of early aviation daredevils.

Speed was perfection, but it also came attached with cash prizes (from newspaper moguls or sponsors who benefited from the technology), ticker-tape parades and instant fame.

In 1873, well before the first automobiles and airplanes, one well-noticed gauntlet was thrown by the French writer Jules Verne, who created the character of Phileas Fogg, then sent him “Around the World In Eighty Days.”  The hugely popular novel celebrated both primitive and modern forms of transportation, but a principal theme was the value of speed and modern man’s victory over distance.  The world, already prevailed over by the interests of empire, could now be circumnavigated.

But could this feat be performed by an actual human? And, more daring still, could it be done by a woman?

In Matthew Goodman‘s breathless, exotic new history Eighty Days: Nellie Bly and Elizabeth Bisland’s History-Making Race Around The World, two extraordinary woman attempt to meet Verne’s challenge.  Or rather, challenges made by their New York editors, inspired by Verne’s best-selling novel and dazzled by the possibilities of an impossible quest creating splashy headlines to sell newspapers in 1889.

You are most likely familiar with Bly, the vanguard young journalist best known for her daring exposes for the New York World.  Posing as a patient in Blackwell’s Island’s lunatic asylum in 1887, Bly revealed deep-seeded abuses within the system.  Almost as importantly, Bly helped define investigative journalism along the lines of stunt work.  She was a Victorian era reality star of sorts, fearlessly defying conventions.

On November 14, 1889, Bly began her quest to beat Phileas Fogg, boarding a steamer for England on her way around the globe. What she did not know then is that the race to beat a fictional character had now been joined by somebody quite real — the journalist Elizabeth Bisland (pictured at left).

A native of New Orleans and a habitue of New York literary salons, Bisland was assigned to take a similar journey by her editor at The Cosmopolitan (precursor to today’s Cosmopolitan magazine).  With less than a day’s notice, he sent Bisland on a trip around the world on the same day — and going in the opposite direction.

Eighty Days is a tale of stops and starts, of telegraph offices and train stations, of foreign places narrowly observed by its two competitors.  Luckily, Goodman doesn’t leave you sitting with the two women, who are sometimes too tired, too rushed or too incurious to explore their surroundings.

With beautiful prose, like a craning camera, Goodman provides sumptuous detail to these fantastic and sometimes mysterious worlds — Hong Kong, Brindisi, San Francisco, Yokohama, the towns along the Suez Canal.

It becomes very clear that this is indeed a trip around the world, but along a fairly narrow band anchored by British ports.  Bly cannot stand the British;  Bisland comes to adore them.  Their personalities are reflected in their empathy.  Bisland mourns a nameless Chinese man who has died aboard her ship.  Bly, at times surprisingly unconcerned of certain conditions, buys a rowdy monkey who accompanies her for the last leg of her trip, to the great alarm of baggage handlers.  Bisland seems the more introspective, Bly the more entertaining companion. 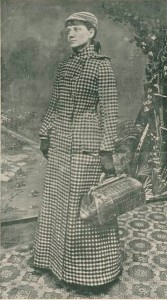 I hate to conjure reality television for a second time in this review, but the competition within Eighty Days, so well paced by Goodman, really comes down to making connections, as often illustrated in CBS’s “The Amazing Race.”  Again, it comes down to the alleged speed of certain vessels, whether they arrive on time, and the abilities of Bly and Bisland to maneuver through foreign countries — many times unaccompanied — to arrive at their next destination.

Eighty Days is a romp around the planet, but it returns periodically to Park Row in New York, where Bly’s newspaper has turned her journey into a best-selling sensation.  Thousands enter a contest to guess the exact time that she will finish her trip.

Like those many newspaper readers, you’ll be scrambling to guess which competitor will arrive in New York first — and, more importantly, what unfortunate event might prevent the other from victory.

Goodman’s latest tale expands upon themes he conjured up in his last book, The Sun and The Moon, another tale about fantastical journalism, regarding the Great Moon Hoax perpetrated by the New York Sun in 1835.  Newspapers are perhaps more accurate in 1889 but no less sensational.

Jules Verne himself makes an appearance too, hosting one of the competitors at his home in Amiens, France.  “She is trim, energetic, and strong,” remarks Jules’ wife Honorine.  “I believe, Jules, that she will make your heroes look foolish. She will beat your record.”

COMING FRIDAY: An interview with Matthew Goodman, the author of Eighty Days!

1 reply on “The Amazing Race: In ‘Eighty Days’ Nellie Bly tries to outdo Jules Verne while a New Orleans writer vows to beat both”

very interesting article, I have not heard these stories before…