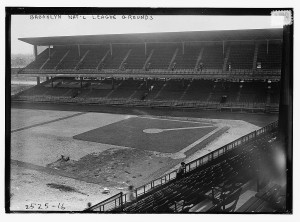 Inside Ebbets Field, 1913, Library of Congress

The first-ever regular season baseball game at Ebbets Field was played 100 years ago today.  The legendary field, once located in the Flatbush neighborhood of Brooklyn, was home to the Brooklyn Dodgers from 1913 until the team left for Los Angeles in 1958.

Here are ten interesting facts about the opening game, played on April 9, 1913:

1)  The Dodgers were thirty years old by the time their lavish new field opened. The team was originally formed under the name the Brooklyn Grays in 1883 by real estate speculator Charles Byrne.  Like many early ball fields, their first home, Washington Park in today’s Park Slope neighborhood, was frozen over during the winter to become Brooklyn’s leading skating rink. 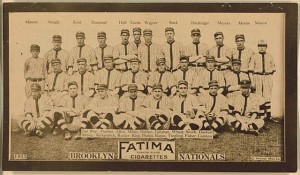 2)  They were originally nicknamed the Brooklyn Trolley Dodgers, for the treacherous skill exhibited by their fans crossing rail-covered streets to get to the ball field.  There were still a great many streetcar lines near their new home of Ebbets Field, but by 1913 the team was more affectionately known as just ‘the Dodgers’. 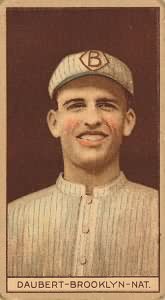 However several names would be casually attached to the team by fans and local journalists — the picture above calls them the Brooklyn Nationals — until 1933, when the name DODGERS would finally be added to both their home and road uniforms.

3)  As a nod to its first-ever day, Ebbets Field was allowed to open one day before everybody else in the National League.  One of their most popular players, first baseman Jake Daubert (at right), was presented with a golden bat and a floral horseshoe in a ceremony before the game and would, by season’s end, go on to win the league’s Most Valuable Player honor.

“Gentleman Jake,” as he was called, is better known today as being one of the founders of the baseball’s unionization movement.   This did not make him popular with the namesake of Ebbets Field, owner Charles Ebbet, who traded Daubert in 1917 after a salary dispute.   His union connection may also explain why this unique, well-liked and exemplary ballplayer is not currently listed within National Baseball’s Hall of Fame.

4)  The ceremonial first ball was thrown in by Brooklyn Borough President Alfred E. Steers, a resident of the neighborhood Ebbets Field made its home — Flatbush.   However, at an exhibition game played just a few days earlier, Ebbets’ lovely daughter Genevieve Ebbets tossed out the first pitch. 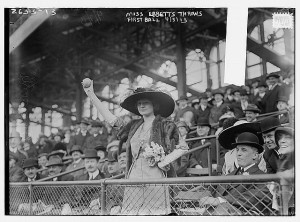 5) The Brooklyn Dodgers played the Philadelphia Phillies that day, which should have boded well for the team in their new home. The Phillies weren’t yet considered a formidable team and were more associated with constant injury. Despite this, the Phillies beat the Dodgers that day, 1-0.

6) Why did the Dodgers lose? Uh, it was unseasonably cold? The Tribune reported that the frightful chill kept the brand-new grandstand partially empty. From the New York Times, April 10, 1913: “It was so cold that the attendance was seriously affected, about 10,000 spectators braving the arctic blasts to see the Phillies win a well-played game by a score of 1 to 0.” [source]

7) The Phillies also had with them an unusual mascot — a hunchback teenage dwarf.  The Phillies home rival the Philadelphia Athletics had a hunchback mascot of their own named Louis Van Zelst, and owner Connie Mack wanted to emulate their success. By, apparently, finding his own young man with a hunchback. Unfortunately, this boy’s name is unknown, but he appears in a 1913 picture with the team: 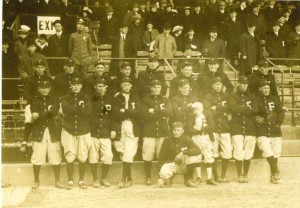 NOTE: The Tribune infers that this may have been Mr. Van Zelst himself and not another teenager. As the name of the boy in the picture above has not been reported, it’s quite likely that this is the Athletics ‘mascot’.  Note that in the article, the Dodgers are called by yet another name — the Superbas.

8) As you could imagine with a 1-0 game, the first-day crowds at Ebbets Field were hardly cheerful.  One might even described them as bored.  The upper seats were barely filled, and the crowd didn’t exactly “wax enthusiastic until the eighth inning” when the Dodgers finally got somebody on base.

9) The first Dodger to ever score a hit in the new field was second baseman George Cutshaw who had only been with the team one year when he scored a single in the first inning.  Ironically, the second basemen was called out when he was caught trying to steal second base.

10) The Dodgers would fare poorly in their first season at Ebbets Field, eventually placing sixth out of eight teams. The winning team that season were their rivals across the East River — the New York Giants.  They would finally bring Ebbets its first pennant victory in 1916. 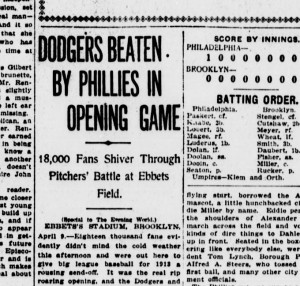 If the photo of Genevieve Ebbets throwing out the first pitch is truly from a few days before the opening game, did the weather change suddenly? She and the people in the stands don’t look like they are dressed for the cold.