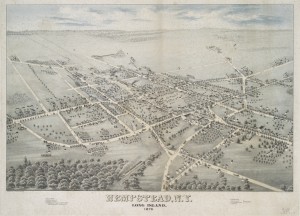 Reaction to the Bowery Boys podcast on the Consolidation of 1898 has been tremendous!  But I do have one clarification, and provided by a very excellent source.

The accurate placing of the boundary line between Queens and the newly created Nassau County was a source of frustration for a great many months after consolidation.  I recounted one such tale involving a schoolhouse in Hempstead, included within New York City’s border after a revised survey was completed. (You can read the complete tale here.)

But that is only one part of the story, specific to the area around that particular building.  It may have gained a schoolhouse, but in fact, overall, New York City lost land in the revised survey, and quite a bit of it too!

According to Manhattan borough historian Michael Miscione:  “When the NYS legislature created Nassau County on Jan. 1, 1899 out of that portion of Queens County that was not part of Queens Borough, they almost entirely redrew the Queens Borough line. In the process, Greater New York did NOT gain territory as you state; though it may have acquired an extra sliver of real estate here and there in the resurvey, NYC ultimately LOST about 12 square miles.

Check out the Queens Borough border on an 1897/8 map versus a map from 1899 or later, and the difference is obvious. As a consequence, NYC was the largest it has ever been during the 12 months from Jan. 1 to Dec. 31, 1898! (A very cool piece of trivia that might come in handy some day.)”

Thanks for that great information, Michael!   If you enjoyed our podcast, you’ll have to check out Miscione’s upcoming lecture on the most malleable neighborhood in the history of New York — Marble Hill, the Manhattan neighborhood that’s really in the Bronx:

Manhattan Borough Historian Michael Miscione will describe the peculiar and complex status of Marble Hill, a neighborhood that is attached to the Bronx but is legally a part of Manhattan. (Or is it?)

Above: A map of the town of Hempstead in 1876.  Part of its western border was affected by the re-surveying of the border with New York City.