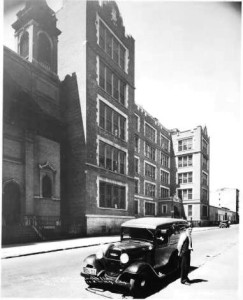 Hail Mary:  There’s a rally tomorrow evening at 6pm to save Mary Help of Christian Church in the East Village.  This unique building from 1917, once serving the area’s Italian immigrant population, has been bought by a developer and is slated for demolition. The rally is in front of the church at East 12th Street and Avenue A. [GVSHP]

And here’s a brief history of Mary Help of Christians Church. It’s where they had the funeral of a few noted gangster, including that of Giuseppe Masseria in his solid silver coffin.  And Sara Delano Roosevelt, granddaughter of FDR, got married here. But, sure, let’s rip it down and put an ordinary condo please.  [Daytonian In Manhattan]

Let the music play: And is Tin Pan Alley in danger too? [Lost City]

What’s that ringing?: Riverside Church is in no danger, thank goodness, nor is the musical secret it holds: the 100-ton carillon in the bell tower. [Narratively]

Wild on wheels: And since we’re on some creative Narratively content, I think you’ll like this interactive tale of Annie Londonderry, the woman who attempted to bike around the world in 1894. [Narratively]

Unconventional: In our latest podcast on the history of the Limelight, I made mention of the number of convents in New York City over the year. Well, Forgotten NY goes one further and does a tour of the street actually named for one — Convent Avenue — featuring the beautiful neo-Gothic architecture of City College. [Forgotten New York]

And are you signed up yet for the Bowery Boys weekly newsletter Five Points?  We’re recommending out-of-the-way, oddball, historical themed events for your weekend.  Last week was Humphrey Bogart, sheep shearing, a book sale, Miss Subways and a tea party with Aaron Burr’s wives. What’s happening for Memorial Day weekend? [Sign up here]