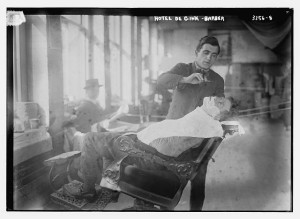 The fight for worker’s rights swept through a variety of occupations over a century ago as New York City laborers rebelled against unfair corporate practices and unsafe working conditions.

Garment workers marched the avenues in protest following the tragic Triangle Factory fire of 1911, as did underpaid street cleaners and ashcart men, leaving heaps of un-retrieved rubbish on the street in protest.  The following year, the waiters and staff of dozens of New York’s finest hotels took to the streets for better pay. Why, by 1913, even some players on the Brooklyn Dodgers were unionizing!

And one hundred years ago this month, it was the barbers turn to march.
Many of the same leaders from other occupational strikes were at the center of the barber strike, which got its footing in the Brooklyn neighborhood of Brownsville.  Soon, barbers across the city had dropped their razors and foaming brushes and left work in consolidation for better hours.
A letter-writer to a wonderfully named 1913 journal called Journeyman Barber, Hairdresser, Cosmetologist and Proprietor wrote, “I will say that on a certain bright morning in the month of May, I found that the entire barber industry was paralyzed.  Nearly 13,000 workingmen were out on strike. Isn’t that a miracle?  Thirteen thousand barbers on strike!”
Mayhem reigned upon the craggy, unshaven faces of Brooklyn men.  “From Bushwick to Bay Ridge haggard men go about with the telltale blemish encroaching upon their visages like a noxious fungus.  Half-shaved men slink about the alleys, avoiding the light of day.” [source]
Scenes of violence did erupt throughout the city, as strike-breakers were attacked and angry mobs filled the street.  A mob of 5,000 strikers — “singing socialistic songs,” noted the New York Tribune — clashed with police in Brownsville on May 7th, customers fleeing barber shops in “a shower of vegetables” and the occasional flying rock.

Below: a cheeky editorial cartoon from the May 8th 1913 Evening World 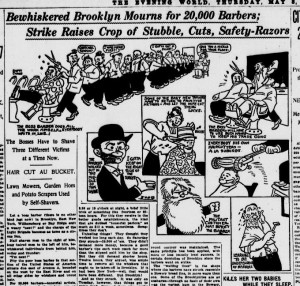 A couple days later, thousands of barbers marched across the Brooklyn Bridge to Union Square, gathering up working men along the way, emptying barber shops of employees and leaving stunned customers in their chairs.  In Union Square the strikers heard speeches from organizers including Joseph James Ettor (pictured below), who had helped organize the waiter’s strike just a few months before. 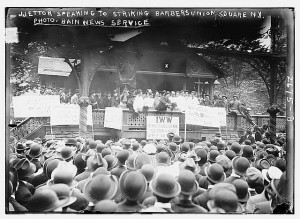 The Evening World makes curious note of one exception to this striking throng. “ONLY LADY BARBERS WORK IN BROOKLYN WHILE MEN STRIKE” went the headline.  “Such a business as the feminine barber shops did!”

Manhattan barbers joined their Brooklyn brothers by mid-month, setting up a Manhattan strike headquarters at 140 Second Avenue.  (Today, that the address of the Ukrainian East Village restaurant.)  Arlington Hall at nearby St. Mark’s Place was the scene of several union gatherings for striking barbers.

Descriptions of rioting barbers sound a bit like scenes from the Civil War draft riots, although much of that description was the newspaper flourish of the day.

Below: Thousands of barber shop workers and their supporters gather in Union Square in 1913. I believe this is the northwest corner of the park. (LOC) 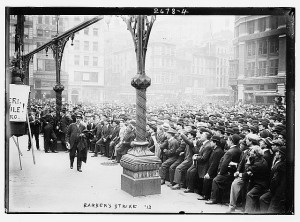 But it does sound like a violent few days in Manhattan.  Shop windows were smashed by rioters in the Ladies Mile shopping district, and altercations with store owners put many in the hospital.  The Sun noted: “Window smashing and attacks on workers, common all day, culminated in dozens of small riots all over the city, so many and so rapid that police headquarters heard of them in bunches.”

Eventually, the strike proved a success, as barbershop owners agreed to worker’s demands.  According to one source, instead of working up to 92 hours a week, employers now agreed to the relatively mild 62 hours a week for their workers, with one entire day off on Sunday! [source]

“2,300 Boss Barbers Capitulate,” declared the Evening World on May 30th. “Brooklyn Strike Over.” By the first of June, it was safe again to go to a barber shop.

Eventually, the strike proved a success, as barbershop owners agreed to worker’s demands. According to one source, instead of working up to 92 hours a week, employers now agreed to the relatively mild 62 hours a week for their workers, with one entire day off on Sunday!