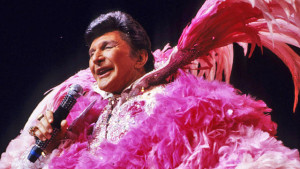 Liberace is the embodiment of a certain California flamboyance, but New Yorkers were as susceptible to his allure as anyone.

In fact, for this brightly-painted musical showman, Radio City Music Hall was a second home.  He continued to smash box office records here year after year as late as the 1980s, well past his prime as anything more than a jewel-encrusted artifact.  In 1985, his stint here grossed more than $2 million.

He went out, of course, in a blaze of glory and sequins.  His final live show anywhere was at Radio City on November 2, 1986, capping two weeks of consecutive shows at the venue. (Most stars have a hard time packing the house one night!)

The entertainer, with his flowing robes, acres of feathered frippery, furs and wires and “dancing waters,” was enough spectacle for any stage, but for this series of shows, he was also joined by the Rockettes and a gigantic simulation of the Statue of Liberty holding a candelabra. Photo of the tickets courtesy Bob’s Liberace

Time Magazine’s Richard Corliss, in a 1986 article called ‘The Evangelist of Kitsch, sets this scene:  “The lights go down in Manhattan’s deco dream palace, Radio City Music Hall, and Mr. Showmanship makes his entrance, flying across the huge stage in a cocoon of feathers, enough for a whole flock of purple ostriches.”

That’s right;  in a move that would inspire future boy bands, Liberace flew in, “attached to a wire like a puffed-up Peter Pan, in a hundred pounds of purple and white feathers,” according to the New York Times.

The audience lapped up every bon mot of coy comedy.  Corliss: “They laughed as he sat down on his studded coattails and remarked, ‘If the rhinestones are turned the wrong way it’ll kill ya.'” 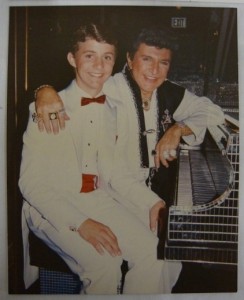 Liberace was assisted on stage by his new handsome assistant Lee;  his last assistant and chauffeur — and not-so-secret lover — Scott Thorson had settled his palimony lawsuit out of court just earlier that year for $95,000. (This is the subject of Sunday night’s Behind the Candelabra with Michael Douglas and Matt Damon.)

Believe it or not, it wasn’t Lee or the Rockettes that got the most stage time with Liberace during the Radio City Music Hall performances.  That honor belonged to 14-year old child pianist and “Liberace protege” Eric Hamelin, who performed a piano duet with the feather-frocked superstar (“Slaughter on Tenth Avenue”) and a couple other numbers. At right: the star and his protege (source)

Stephen Holden at the Times was understandably critical of the actual performance.  “His heavy-miked pianism is at once metallic sounding, exaggeratedly florid in ornamentation and unbendingly rigid in tone and phrasing,” said the critic.

But the audience lapped it up, as he buoyantly hopped from classic to classic with jokey classical trills linking the songs together.  His tribute to Chopin led right into “Mack the Knife.”  His mournful, dripping “Send In The Clowns” spiraled into the silly ’60s novelty song “Bumble Boogie.”

His final song that final evening was “I’ll Be Seeing You”.  The audience leaped to their feet as Liberace in his sumptuous robes and dazzling bejeweled rings gave his final bow.  Three months later, Liberace would be found dead of AIDS-related pneumonia in his Palm Springs home.

He left the stage with his personal charms intact even as his engineered facade had practically disintegrated.    “Too many young performers have forgotten that the most important part of show business is not the second word, it’s the first,” he was quoted as saying . “Without the show there’s no business.”

Believe it or not, video footage from those final Radio City Music Hall concerts.   While this footage is poor quality, the fact that it exists at all is extraordinary.  Pop open the champagne and enjoy!

9 replies on “The Evangelist of Kitsch: Liberace’s final performances, with the Rockettes, at Radio City Music Hall 1986”

Fabulous! There will never be another Liberace!

Thank you so so very much for those Very True, and Kind words of yours… Every minute of each and every day He, Liberace is missed…
He really is an American Hero… He loved Everyone, and was loved by so many… Thank you so much for all you gave to all of us around the world… We love you, we miss you so much, we Love you, our Dearest Liberace…

As ill as he was at the time, he flew across a stage suspended by wires, gave a hundred percent to his audience, and never missed ANY of his sold out performances. A truly great star ! Godspeed Mr. Liberace.

Yes, I was there , not knowing until today, it was his last show ever, he passed away next year.

The world lost a most wonderful piano player and showman. He will always be remembered for his smile, wink, and especially his music.

Thank you Rosemarie, your so so correct., his wonderful and Endless smiles. I have so much to learn from him… God really blessed America, and this Whole world, with his gift of Liberace…

Liberace was not found dead in his Palm springs home! The house was full of many people including Eric Hamlin and his family days before he passed and over 500 people kept a candlelight vigil outside for 3 days before his passing.

Thank you so much for that Nash, for clarifying… And sharing the truth to us, his fans… You’re kind words to let us all know, that he was loved, and cared for in his last and final moments… He, Liberace would be so so grateful to you Sir for that… Thank you Nash for Caring, thank you again…