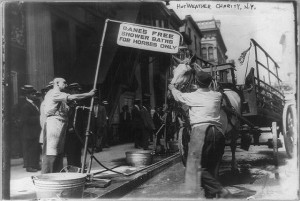 I’m grateful to see horses getting a little love in the waning years of regular horse-drawn vehicles in New York. But never realized they had their own drive-thru horse wash!

This 1912 horse recuperation station was made possible by William J. Gane, the proprietor of a few Herald Square moving picture houses and a ‘pioneer exhibitor’, according to one source..  He personally funded these way-stations for heated horses at Broadway and 33rd Street.

“A horse fell down across the street one afternoon in June, and it looked like it was going to die,” Gane told the New York Sun. “They sent for a policeman to shoot the poor beast, but some of my men happened to be using a hose … and I had them pour water over the horses’s head and back for half an hour.  The policeman didn’t have anything to do, for the horse scrambled to his feet and went on.”

The New York Water Department initially fined Gane $10 a day for the waste of water, yet he obstinately refused to stop providing the street-side shower service.  He then installed the makeshift shower-head (pictured above) and the city left him alone.

Although some had sanitation concerns, others in the neighborhood thought the shower station good for business.  The Sun even trumpeted the benefits in the headline “Water Troughs in Front of Saloons Good For Business, Say Proprietors.”

“I like myself when I’m through with work,” said the man operating the horse showers, “and I suppose the horses might feel the same way about it.”

Photo courtesy the Library of Congress