There once was a talking dog named Don.

One hundred years ago today, he saved a man from drowning in Brighton Beach.  Don shouted or barked the word ‘Help!’ then ran to the waters to save him.

But perhaps I should explain.

In December 1910, the New York Times ran a startling announcement that a dog in Germany had been discovered that could pronounce certain human words.  The setter from Theerhutte was owned by an eastern German gamekeeper and possessed several human qualities, not the least of which was the name Don.  The dog had beautiful eyes “sometimes almost human in their expression” and was an “uncommonly intelligent animal,” according to the Times.

Naturally, Don spoke only in German.  Being a dog, among the six words at his command were ‘haben’ (want), ‘kuchen’ (cakes) and ‘hunger’.  You had to use your imagination, of course, but one could detect a slight difference in Don’s barks that could be interpreted as separate words.

Despite some understandable cynics out there, Don was on his way to a career in the theater. 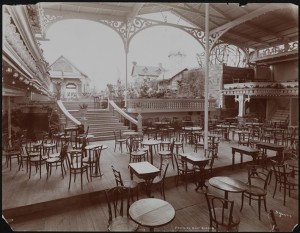 Above: Hammerstein’s rooftop garden at the Victoria Theatre in Times Square, the stage where Don the Talking Dog made his debut.

Generally speaking, dogs were a definite novelty among the stars of the vaudeville stage. A troupe of animals called Wormwood’s Dogs and Monkeys held court on the stages of Coney Island in the 1910s.  More renowned, perhaps, was the cross-dressing pooch Uno the Mind Reading Dog , who wowed theater crowds in 1910.

But the highest paid dog act up to that time was Dan the Drunken Dog, an animal who emulated the wobbling demeanor of an alcoholic, to the delight of audiences at the Oscar Hammerstein‘s Victoria Theater rooftop garden in Times Square. 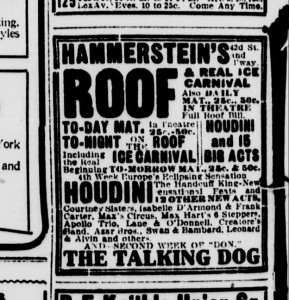 None of these would reach the fame of Don the Talking Dog.  Hammerstein was so sure New Yorkers would love him that he posted a $50,000 bond to have Don brought to the United States.  The dog arrived in America on July 9, 1912 aboard the German steamship Prinz Friedrich Wilhelm, “absolutely refus[ing] to be interviewed at the pier, and indeed, had been too seasick on the way over to converse with anybody.” [source]

A few weeks later, the German canine would make his debut on Hammerstein’s rooftop garden, alongside master of ceremonies Loney Haskell.  “The trained growls which emanate from his throat can readily be mistaken for words,” claimed a Variety reviewer.  “On the roof the audience, skeptical in the first place, became more so at Loney’s [introduction], but after the dog had made its first try they became interested and later enthusiastic.”

His salary was allegedly $1,000 a week, paid, of course, to his owner Martha Haberland.  Like many temperamental divas, Don disliked the roof garden lifestyle due to the sounds of traffic, preferring to perform inside theaters, not atop them. But he was huge success that year, touring to other Hammerstein stages before returning to Germany that fall, a bonafide American star. 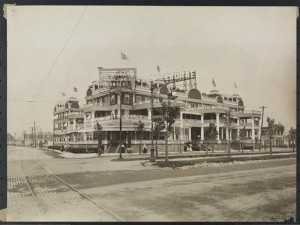 Above: The Hotel Shelburne in Brighton Beach, where Don the Talking Dog saved a man from drowning

Don returned to Hammerstein’s Times Square stage in 1913, this time performing alongside the likes of young comedian Sophie Tucker.  Later that summer he arrived in Brighton Beach to delight Brooklyn audiences.  It was here, on one of his afternoons off, that he rescued a drowning man with his famed ubiquitous voice.

The man was a waiter for the Hotel Shelburne who was actually out walking Don that afternoon.  The man jumped in the water for a swim and instantly lost his footing.  Don saw the man flailing in desperation in the ocean foam and, then, according to the New York Sun, allegedly unfurled one of his new words — “Help!” — startling everyone on the beach.*  The performer then swam over to the drowning man and began pulling on his bathing suit.

A passing policeman leaped into the water on his horse to rescue Don and the waiter.  This whole scene — dog, horse, waiter, policeman — was in turn rescued by three lifeguards in a boat. [source]

This was perhaps Don’s shining moment. He shortly retired from the stage and finally died in 1915 back in Germany.  His final words, according the Evening World:  “Say goodbye to my old pal Loney Haskell.”

*The Tribune reports the same event but does not mention this magical ‘Help!’

Great story! You may be interested in reading more about the animal acts and the actual farm that was at Hammerstein’s Roof garden, complete with ducks, sheep, and a cow with her very own milkmaid.
http://frenchhatchingcat.com/2014/05/23/the-dutch-farm-at-hammersteins/