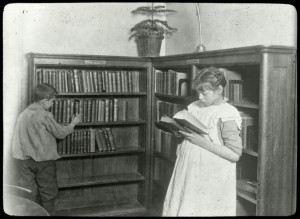 No amount of studying will prepare you for some of these odd questions.  (A girl at Seward Library, photographed by Lewis Hine.)

Trivia quizzes are very popular today in bars and pubs throughout the city, but in the past, they’ve had more elitist purposes.  In November 1914, a group of possibly insecure ex-New Yorkers in Chicago — united under the organization named the Empire State Society of Chicago — announced a contest featuring fifteen questions on New York history.

The New York Sun got hold of this list of questions and posed them to people actually living in New York. What they got was mostly befuddlement and blank stares.  Rather than admit they were stumped, many basically said, whatever, they’re in Illinois.  “Some have been heard to give as an excuse for their ignorance — judged by the contest questions — that perhaps the Chicago-New York exiles have selected such queries as will reveal what is greatest and best in the State according to Illinois standards.”

The fifteen history questions published by the New York Sun are below.  How many can you answer correctly?  The answers are below the jump.

Keep in mind these questions pertain to the entire state of New York, not just the city.  Good luck!

1. Where is the Milburn House (below) and with what event is it associated? 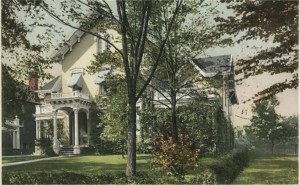 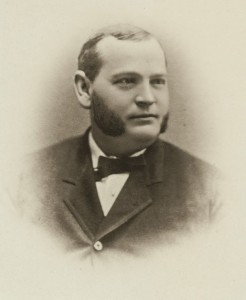 4. In what famous work of fiction is the story of the Bloody Pond massacre related?

5. In what great work of fiction does the character of Anthony Van Corlaer appear?

7. Whose monument stands at Stone Arabia and what occurrence does it commemorate?

8. From what does the town of Painted Post derive its name?

9. Name one person of national reputation whose name is prominently associated with each of the following places:  Auburn, Kinderhook, Tarrytown, North Elba, Yonkers 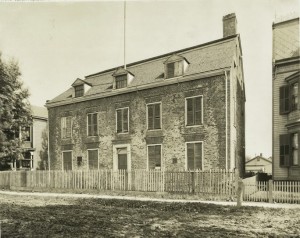 10.  Relate the history of the ‘Yankee Doodle’ house at Rensselaer. (Pictured above)

11. To what natural advantage is attributable the commercial supremacy of Rochester?

12. Give the name and work of a woman of Troy who made an important contribution to the cause of higher education of women.

13. Who was ‘the Poet of the Revolution‘ and where did he reside?

14. When and where was the New York City Chamber of Commerce organized?

15. What building once stood at the northeast corner of Wall and Nassau streets, and with what great event is it associated?

1. The house is in Buffalo, NY. It is where President William McKinley was taken after he was shot by the assassin Leon Czolgosz, and it’s where the president died.

2. According to the article: “What Happened in Dunkirk —  There was a celebration at Dunkirk about the time mentioned in the question, for the purpose of letting Dunkirk whoop and hurrah over getting railroad facilities.  The Erie Railroad entered the town and in consequence there was a celebration.  But as an event that has a place in New York history it takes a strain of the imagination to rate it so high.”

3. R.P. (Roswell Pettibone) Flower was the governor of New York (1892-94).  Clement Clarke Moore was owner of the Chelsea estate and author of ‘Twas The Night Before Christmas.  Marshall Lefferts was a Civil War veteran, the “long Colonel of [New York’s] Seventh Regiment.”  “He marched down Broadway at the head of his command when war broke out in 1861 and presented a martial figure that was long remembered.”  William Cooper was founder of Cooperstown and the father of James Fenimore Cooper.

4. Speaking of Cooper, the Bloody Pond massacre is from James Fenimore Cooper’s The Last of the Mohicans.

5. Washington Irving‘s A History of New-York from the Beginning of the World to the End of the Dutch Dynasty, by Diedrich Knickerbocker.

7. Stone Arabia is today a hamlet in the town of Palatine, New York.  The Sun doubts there was ever such a monument here at all.  If there was one, it was dedicated to a Revolutionary War battle from 1780, “a battle fought between the colonists on the one hand and the Indians under Sir John Johnson, son of the famous Sir William Johnson.”

9. This question is so open-ended!  But the answers they might have been looking for are William Seward (Auburn);  Martin Van Buren (Kinderhook);  John Andre or Washington Irving (Tarrytown);  John Brown (North Elba); and Samuel Tilden (Yonkers)

10.  I’ll quote the answer straight from the Sun article:   “The ‘Yankee Doodle’ House — Who really wrote ‘Yankee Doodle — the words and music — is not positively known, according to many authorities.  Therefore it cannot be told positively where it was written.  There is a Yankee Doodle House in Rensselaer-on-the-Hudson.  It was used as a British army headquarters in the French and Indian War, so it is said.  The author of the song is declared to have been Dr. Richard Shuckbergh….He was a surgeon in the British army.”

11. Rochester is known as the The Flour City, believe it or not.  Flour mills there used the waterfalls of the Genesee River.

12. “The Troy Woman Educator — This refers of course to Emma Willard, who in 1814 submitted to Gov. Clinton the manuscript of an article entitled: ‘A Plan For Improving Female Education.’ “

13. Philip Freneau and he was born in New York. (But odd question, as he’s often associated with Philadelphia and is in fact buried in Matewan, NJ.)

14. There’s a long-winded answer in the original article, but essentially the answer is — Fraunces Tavern.

15.  “The old City Hall at Wall and Nassau was altered for use as the first Capitol of the United States.”  In 1914, the building was the U.S. Custom House, later to be reclaimed as a historical relic and renamed after the original Federal Hall.