PODCAST As New York City enters the final stages of this year’s mayoral election, let’s look back on a decidedly more unusual contest 100 years ago, pitting Tammany Hall and their estranged ally (Mayor William Jay Gaynor) up against a baby-faced newcomer, the (second) youngest man to ever become the mayor of New York City. 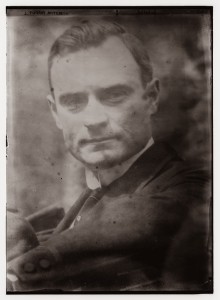 John Purroy Mitchel, the Bronx-born grandson of an Irish revolutionary, was a rising star in New York City, aggressively sweeping away incompetence and snipping away at government excess.  Under his watch, two of New York’s borough presidents were fired, just for being ineffectual!  Mitchel made an ideal candidate for mayor in an era where Tammany Hall cronyism still dominated the nature of New York City.

Nobody could predict the strange events which befell the city during the election of 1913, unfortunate and even bizarre incidents which catapulted this young man to City Hall and gave him the nickname the Boy Mayor of New York.

But things did not turn out as planned.  He won his election with the greatest victory margin in New York City history.  He left office four years later with an equally large margin of defeat.  Tune in to our tale of this oft-ignored figure in New York City history, an example of good intentions gone wrong and — due to his tragic end — the only mayor honored with a memorial in Central Park.

PLUS: The totally bizarre death in 1913 of Tammany Hall’s most popular leader

Mayor William Jay Gaynor on his inauguration day in 1909, walking across the Brooklyn Bridge to City Hall, from his home in Park Slope. 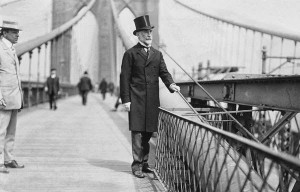 William Jay Gaynor at the very moment he was shot in 1910, on an ocean vessel docked in Hoboken.  This picture was taken by a New York World photographer, one of the most famous works of early journalism photography. 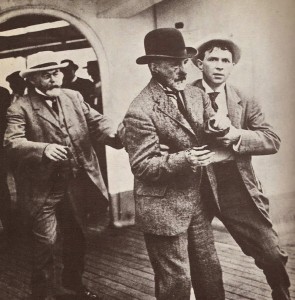 Gaynor (at left) attempted to stage a political comeback (after being by Tammany Hall) at the notification of his independent candidacy at City Hall in September 1913.  The shovel in front of him was his campaign emblem.  Within a few days, he would be dead of the assassin’s bullet he received three years earlier. 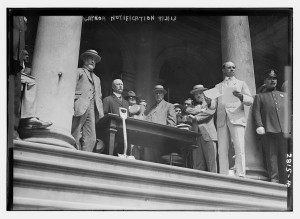 The death of Big Tim Sullivan also caused ripples in the mayoral election of 1913. The picture below is of the Bowery, overflowing with mourners. While Sullivan was out of politics (and in an asylum) by 1913, his sudden and unusual passing had an effect on Tammany Hall supporters, throwing another strange event into an already tumultuous year. 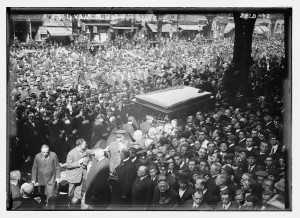 Mayor Mitchel with President Woodrow Wilson in May 1914, at a memorial service for American marines and seamen killed in Veracruz during the Mexican Revolution. 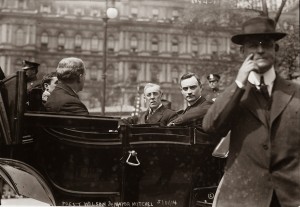 Mitchel at his desk at City Hall, presumably cracking down on some kind of over-expenditure or waste. Or possibly silently suffering from migraine headaches which plagued him during his entire term as mayor. 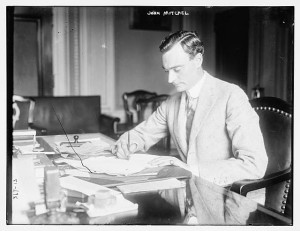 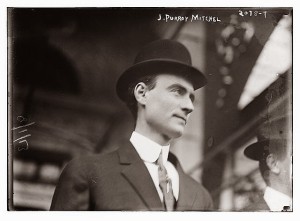 John with his wife Jane. 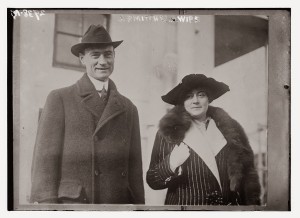 Gerstner Field in Louisiana, where Mitchel had his tragic airplane accident on July 6, 1918. 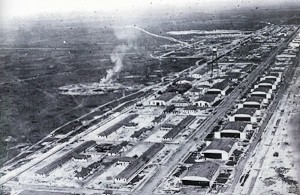 Another New York funeral: The body of John Purroy Mitchel is carried in a procession from City Hall, through the Washington Arch, and up to St. Patrick’s Cathedral. 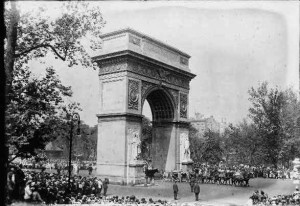 Theodore Roosevelt, one of the pallbearers at Mitchel’s funeral, leaves St. Patrick’s in this short film by Edison.

The John Purroy Mitchel memorial, near the reservoir in Central Park. (Courtesy Flickr/stormdog42) 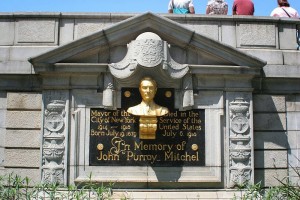 By the way, the recording that was featured in this episode is called ‘New York, What’s the Matter With You?, recorded by vaudeville star Nat M. Wills in 1913.  The song references Mayor Gaynor and his planned curfew of restaurants and bars that is mentioned in the podcast.  It references several dances of the day, including the grizzly bear.

Most pictures above are public domain, courtesy of the Library of Congress