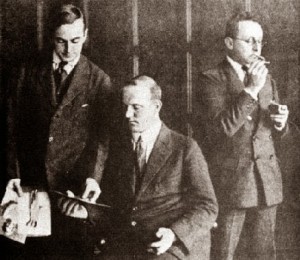 — Here’s another ‘deleted scene’ from our last podcast, Episode #159 The Broadway Musical: Setting the Stage.

In this excerpt, I’m talking about the unique challenge that was faced by young songwriter Jerome Kern when he began working at the Princess Theatre in 1915.  His early work was actually for the British stage — that’s how he met later collaborator P.G. Wodehouse — but he would find out that London audiences from the upper crust practices slightly different habits than their tony New York counterparts.

— Our discussion in this episode ends in 1927, but if you’d like to explore some later Broadway musical history, I recommend you check out this fun interactive website, courtesy the Marriott-Marquis in Times Square.  It displays a selection of Broadway musical from 1937 until today. You can click into each other for more information.

— Our first new podcast of the year will be available on January 10!

1 reply on “Another Podcast Extra from our Broadway Musical show, plus an interactive treat for theater fans”

When my play “Diamond Lil” was playing on West 46th Street (from August 17th, 2013 – November 24th, 2013), because the drama is set on the BOWERY during the 1890s, I tried to invite The Bowery Boys to come — — or (at least) to speak to the actor who played Chuck Connors or the actress who played the Queen of the Bowery.

Radio silence from you guys, not even a brief “thanks, lady, but we’ve gone fishin’!”

What’s the best way to reach you fellows and get a reply?

I always do enjoy your podcasts and I liked the short film you recently had on AOL about Chinatown gangs/ tongs (AOL’s “What Remains” series).
“Diamond Lil” is set in a saloon on Chatham Square in 1895.