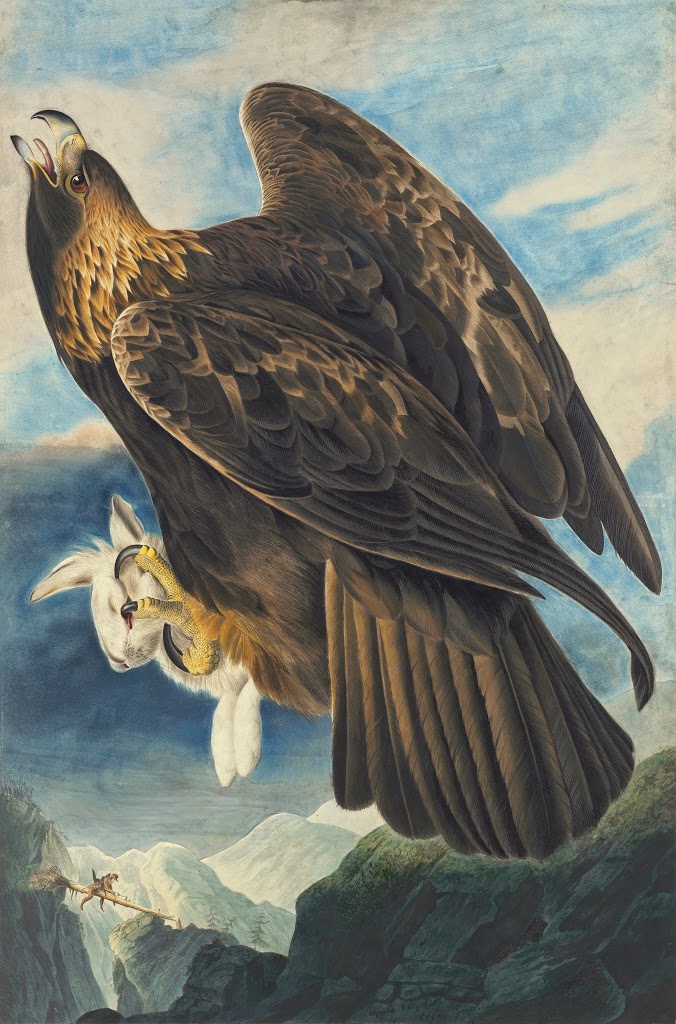 Happy Easter!  Audubon’s Golden Eagle with its bizarrely depicted bunny prize.  Notice the small man in the background. That’s Audubon himself as ‘an American woodsman’, the only appearance he makes in this series of watercolors.


You’d be forgiven for thinking that the latest show at the New-York Historical Society — Audubon’s Aviary: Parts Unknown (Part II) — is about birds.  It’s in the title, after all. 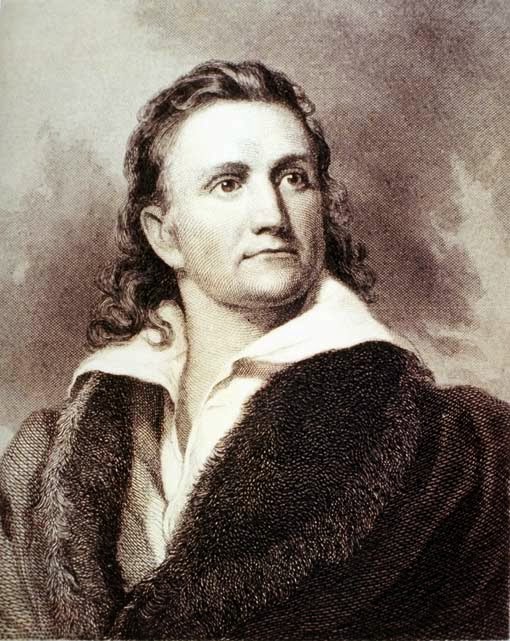 The gallery, painted sky blue, is filled with them, most in studied, formal poses, trapped in elaborate picture frames, a static zoo for slightly unusual animals.  You’ve certainly seen the work of John James Audubon and might be familiar with his style.  His creatures are sometimes arched and twisted around a frame in a way that seems otherworldly.

But take your focus off the individual subjects and look around. You’re basically standing in the middle of one of the greatest publishing achievements in history.

The Birds of America is an ambitious book of wondrous art, published in sections between 1827 and 1838 and collected in a double-elephant-folio (almost 40 inches tall).  The watercolors here are studies for the original edition of Birds, one of the most treasured books of the 19th century, a landmark of publishing and a charmingly dated approach to animal preservation.

This is the Historical Society’s second Audubon show, this time mostly featuring images of water fowl. (Part three will come next year.)  The individual birds themselves may either bewitch or repel you — depending on your tolerance for 19th century scientific formality — but the overall display is surprisingly moving.  You’re standing here in an age where the published tome itself has become an endangered species.

Audubon was one of the most esteemed New Yorkers of the early 19th century, although as the era’s greatest naturalist, he was rarely in one place for long. (His family roots in France frequently took him back overseas where he was widely hailed.)  He owned an upper Manhattan estate Minniesland where his descendants lived for decades.  The watercolors you see in this exhibit were stored at Minniesland for decades; his wife Lucy often bringing them out to the delight of dinner guests.

Audubon Terrace sits on most of that land today.  Audubon is buried nearby at Trinity Cemetery.

A vista of Audubon’s home and the Hudson River. You can see this particular print in NYHS’s exhibit: 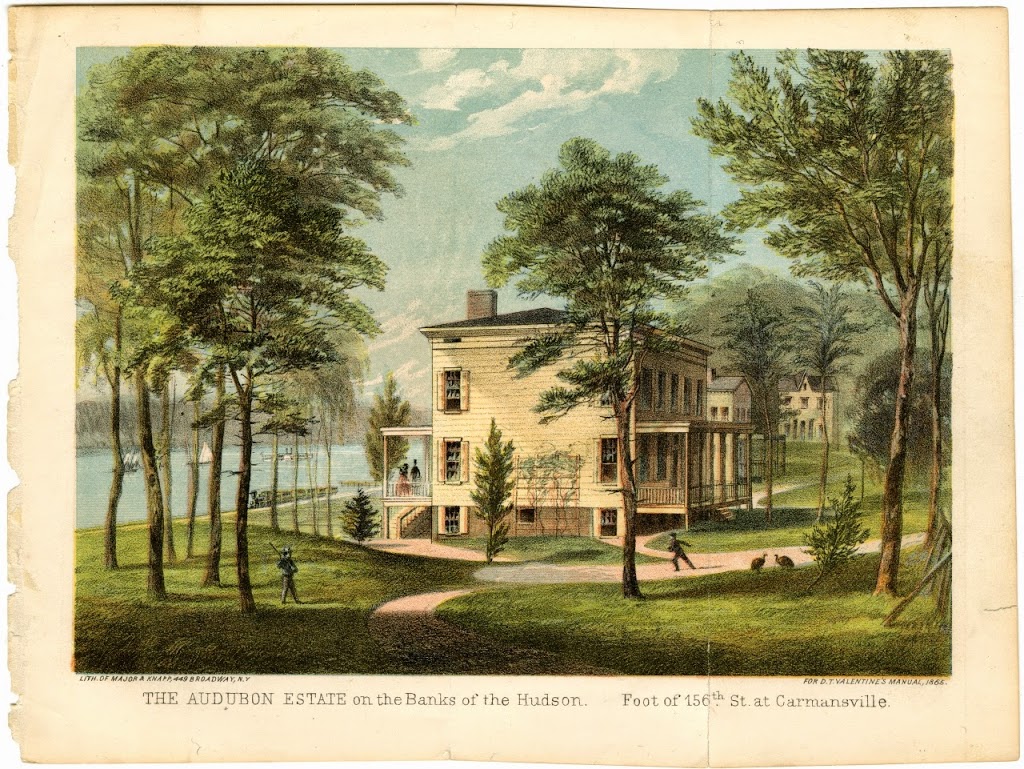 Hardly any of The Birds of America depicts any creature he would have seen from his porch.  The exhibit takes you along on his travels, constantly on the move over the Atlantic Ocean on the search for specimens. And we get to meet some of his collaborators, including his sister-in-law Maria Martin, who contributes some of watercolors in the collection.

His drive to preserve seems especially prescient today.  In 1829 he wrote  “When I see that . . . the vast herds of elks, deer and buffaloes which once pastured . . . in these valleys . . . have ceased to exist; that the woods are fast disappearing under the axe by day, and the fire by night . . . when I remember that these extraordinary changes have all taken place in the short period of twenty years, I pause, wonder, and, although I know all to be fact, can scarcely believe its reality.”

Little did he know that it would be the book itself — not just the birds within his own great masterpiece — that would now seem to be similarly imperiled.

You may the most transfixed with the bound edition of The Birds of America in the middle of the gallery.  Behind glass, its dimensions give it the appearance of something you might find at the Cloisters museum.

Audubon’s Aviary: Parts Unknown (Part II of the Complete Flock) on display at the New-York Historical Society, until May 26, 2014.  Visit their website for more information. 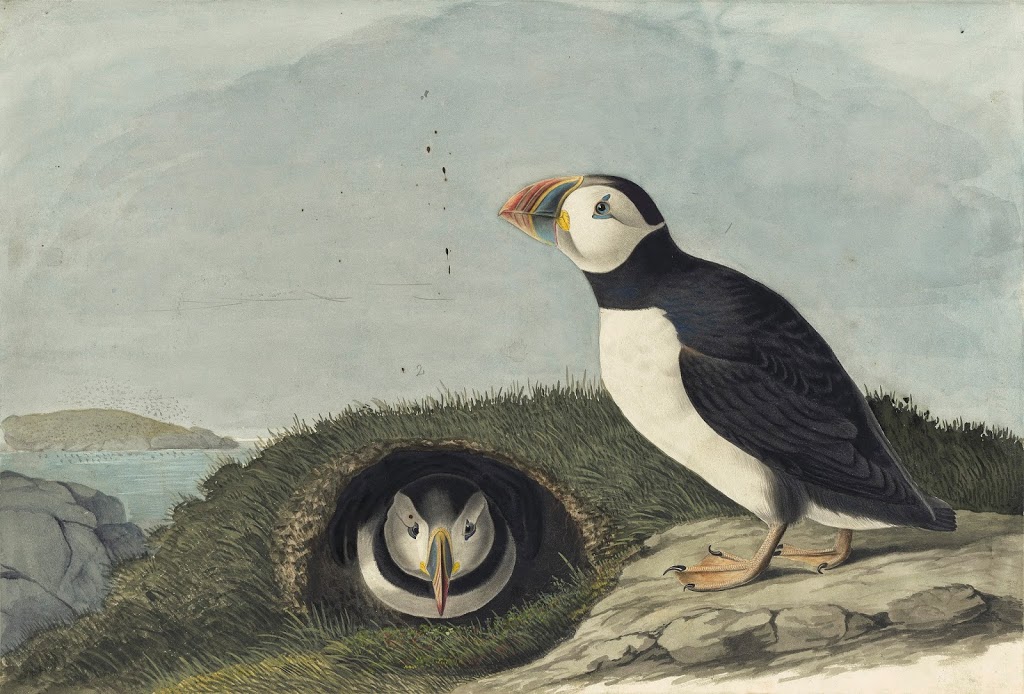