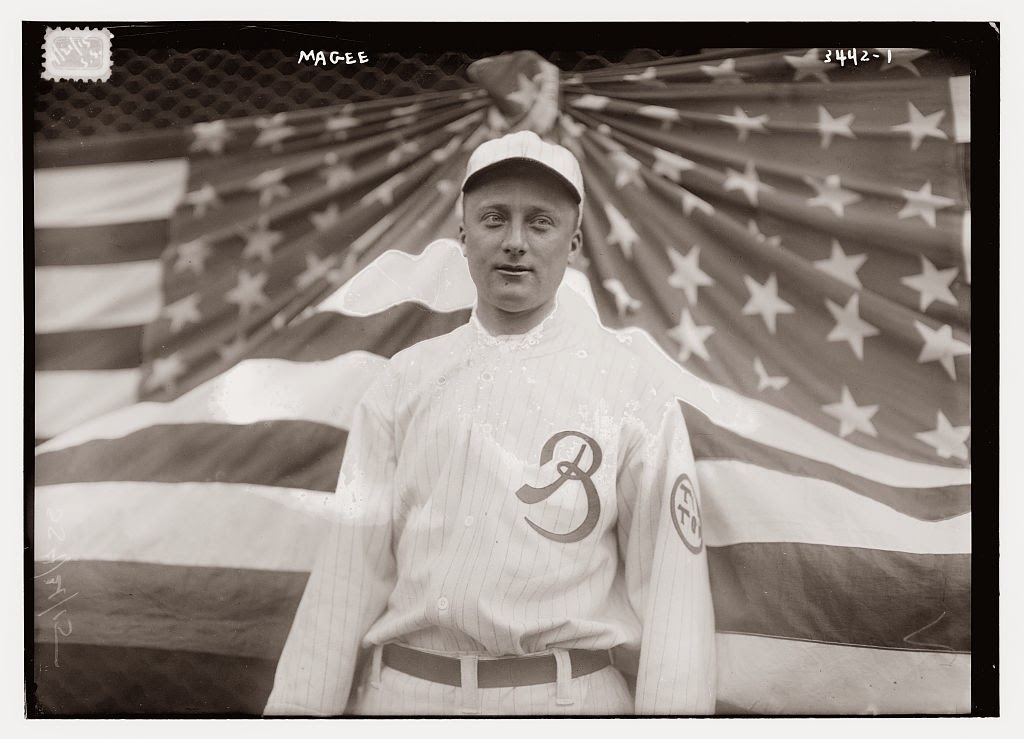 Baseball has long been a sport of two parallel sports leagues — the National League and the American League — which have gotten together at season’s end to play the World Series since 1903. Â But for an unusual moment in 1914 and 1915, there was a third baseball league called the Federal League. 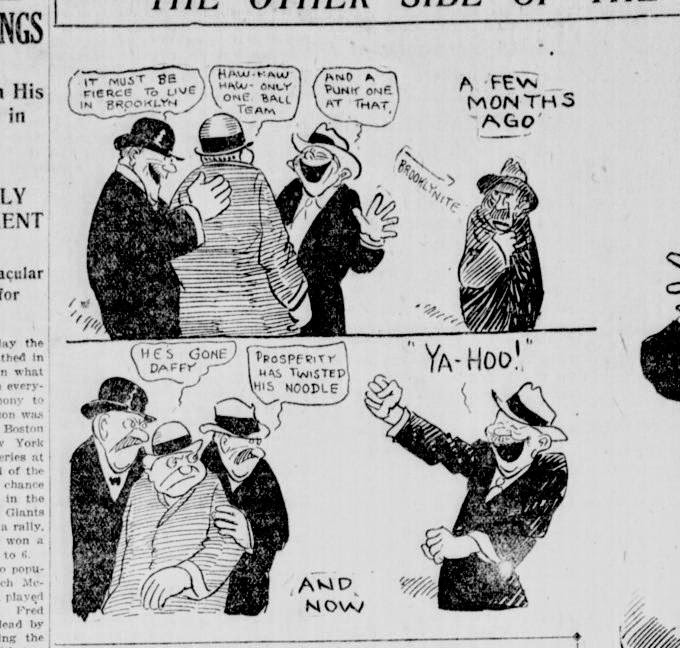 The Federal League was formed specifically in protest to the signing practices of the two dominant leagues, doing away with pesky reserve clauses (binding players to certain teams for almost their entire careers) and offering higher salaries. Â For a second, it seemed possible that the Federal League might provide a new way to organize a major sport.

There were eight teams in the Federal league which such unusual names as the Chicago Whales, the Newark Peppers and the Baltimore Terrapins. (Yes, somebody named a ball team after a turtle.) 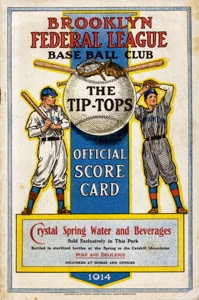 Within the New York area, one franchise was awarded to Brooklyn, owned by a baker named Robert Ward. Â His bakery for Tip-Top Bread (centered at 800 Pacific Street in today’s Prospect Heights) was obviously so lucrative that he eventually sank one million dollars in funding the team that eventually took the name of his baking enterprise — the Brooklyn Tip-Tops.

Brooklyn’s other team, the Dodgers, had conveniently vacated their old wooden field, Washington Park, for their brand new home Ebbets Field in Flatbush. Â Ward hastily prepared to move the Tip-Tops into the Dodgers’ old home by paying for a spectacular upgrade to the dilapidated Gowanus park. Â It was located between 1st and 3rd Streets at Fourth Avenue.

The baker, with his brother George S. Ward, sunk more than $250,000 into the new concrete-and-steel ballpark, situated so near the Gowanus that fans got a good whiff of its toxic odors on summer days.

The new park itself was rather flawed with bleachers extremely close to the field. Â According to author Daniel Levitt: “[T]he tiny foul territory caused nearly all foul balls to end up with the spectators. Â At the time fans were not allowed to keep foul balls … leading to a tacky atmosphere as team officials constantly wrestled balls away from fans.”

Another set of cheap sets, derisively called ‘sun bleachers’, which provided an unpleasant scorching experience during the summer, were quickly closed after some bad publicity.

Below: Inside the refurbished Washington Park on opening day of their second (and final) season 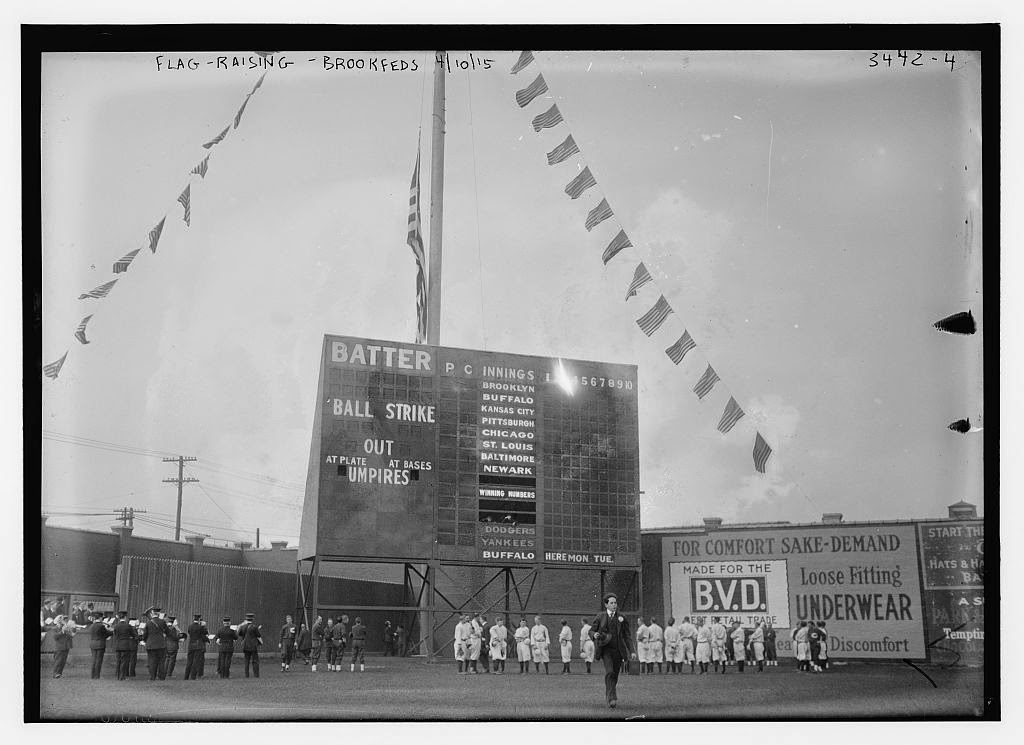 Construction equipment still darted the grounds when they opened on May 11, 1914. Â “The Federal League opened here with a bang,” said the Evening World.Â  “Bands, horns, sirens and vocal assistance from 16,000 fans gaveÂ New York’s fourth baseball club a noisy welcome.” (The other three being the New York Giants, the New York Yankees, and, of course, the Dodgers.)

At first, Brooklynites emphatically supported their new team, quickly nicknamed the BrookFeds. Â But it soon became obvious that the team was nothing to write home about.

They finished their inaugural season with an unimpressive record of 77 wins, 77 losses. Â In comparison, the Giants, located at the Polo Grounds, made it to the World Series. Â However, the young team did finish better than the Yankees (57-94). And even managed to best the Dodgers (65-84)!

Given Ward’s religious beliefs, he instructed that no Sunday games be played at the park, a serious blow given that it was the only day off for many potential working-class fans.

Another strike against the team occurred during the winter when the team was unable to sign away more successful players from the other two leagues. Â The one exception was the outstanding Lee Magee (pictured above in a Tip-Top uniform) who was hired away from the St. Louis Cardinals and even managed the team during the 1915 season. Â He would later join the Yankees.

“If hustling, hard work and ambition among the players make a winning team, the Brooklyn fans will see one in Washington park this year,” Magee claimed.

An ad for second season opening day, from the Evening World. Â The flag raising mentioned below is pictured above: 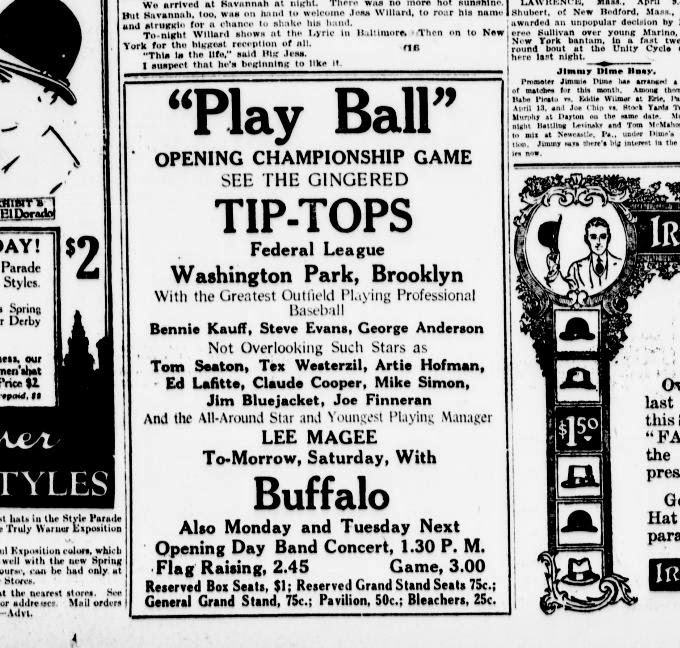 The fans showed up for the beginning of season two, but enthusiasm quickly ebbed. Â In fact, that first game against the Buffalo Buffeds (yes, that’s their name!) seemed to auger a host of frustrations for the rest of the season; Â it went unusually long almost into night — the park was not lit — with “three hours of errors and wrangling.”

Behind the scenes, the two other leagues were busy trying to dismantle the Federal League who had filed an anti-trust suit in January. Â It did not help the mood in New York that the Tip-Tops were doing worse under Magee. Â They completed their season 70-82, second to last behind the scathingly terrible Baltimore Terripins.

Below: Magee with the manager from the Buffalo Buffeds: 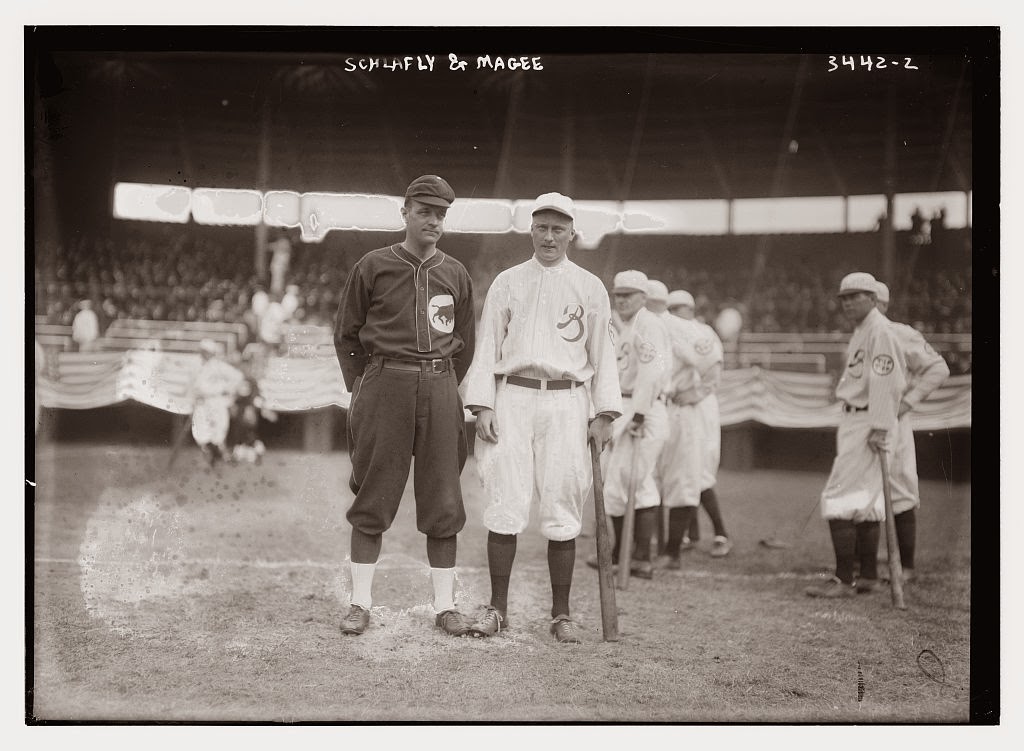 Machinations outside New York doomed the team. Â The National and American Leagues managed to eradicate its rival through series of brokered deals and buyouts. Â One of these deals changed the face of American baseball, when the owner of the Chicago Whales was allowed to buy the Chicago Cubs and move them into the Whales’ new stadium — Wrigley Field.

The only team that remained to battle back against the two leagues was the Federal League’s least successful team — the Baltimore Terrapins. Â They sued the leagues saying it was a violation of the Sherman Antitrust Act. Â The case went all the way to the Supreme Court who, in the landmark case Federal Baseball Club vs. National League,Â handed Baltimore something they were very familiar with — defeat.

On December 18, 1915, the Tribune revealed the fate of Brooklyn’s second baseball team:

“The Brooklyn Tip-Tops will withdraw from Washington Park, leaving the site barren of baseball and the city in the hands of the Superbas [Dodgers]. Â Organized baseball will reimburse George S. Ward annually with 5 percent of the assessed value of Washington Park for twenty years.”

By 1916, Tip-Top went back to meaning fresh white bread.

While Washington Park was eventually dismantled, a part of it still exists. Â Today on the site is a yard for Con Edison. Â The western wall along Third Avenue was once part of the ball park. Â Perhaps if you go over to the Gowanus Whole Foods, you can walk over a block or two and check out this incredible piece of sports history! 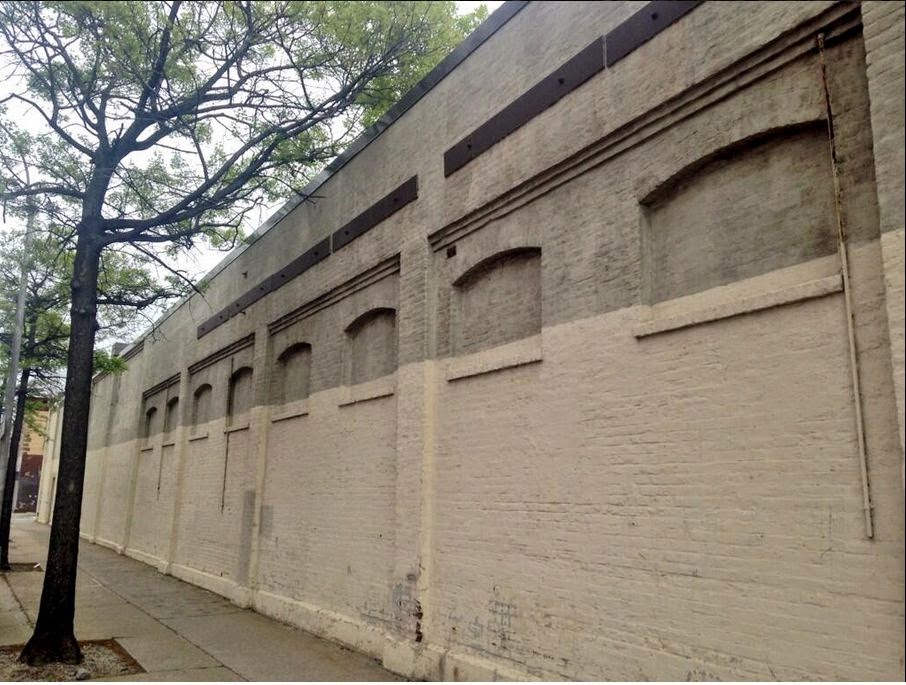