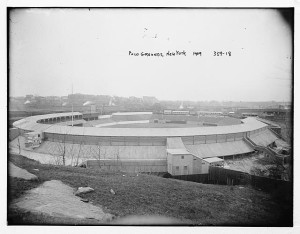 The Polo Grounds in 1923, the first year of a major expansion to accommodate fans of the New York Giants baseball team and a great many historic boxing matches (LOC)

Fifty years ago today, the final game was played at the Polo Grounds, the legendary sports field that had once been home to the New York Yankees, the New York Giants (both baseball and football), and the New York Mets in their debut season.

The New York Giants at the Polo Grounds in 1950 (picture courtesy Dugout Legends, with another great article on the stadium’s history) 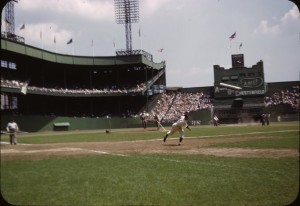 “The smallest crowd to watch the Mets at the Polo Ground — 1,752 paying customers — turned out for this finale at the Harlem ball yard.  Maybe the fact that there had been two previous major league ‘last games’ at the Polo Grounds took a bit(e) from the occasion.”

The writer is referring to the last game by baseball’s New York Giants in 1957 and the Mets last game from the 1962 season, when there were supposed to move into their new digs at Shea Stadium.  But Shea wasn’t ready, and the Mets remained at the Polo Grounds for a final season, apparently to an audience of crickets.

“There wasn’t too much fuss and bother about the affair yesterday,” the Times lamented.

The Mets first game at Shea Stadium was in April 17 the following year.  The brand-new stadium dazzled; the Mets did not.  They lost to the Pittsburgh Pirates, 4-3.  One week earlier, April 10th, their former home was torn down.

5 replies on “The Polo Grounds: The final game, 50 years ago today”

Very glad to say I attended one game at the Polo Grounds in its final season. Wish I had a Time Machine so that I could go back and watch a few more!

The Times was so wrong! A growing and devoted band of Baseball Giants lovers called the New York Giants Preservation Society still pines for the Polo Grounds and all it represented, half a century after its demise.

I have a from the last game the NY giants played in the polo grounds Sept. 29th 1957. how much is the ticket worth?