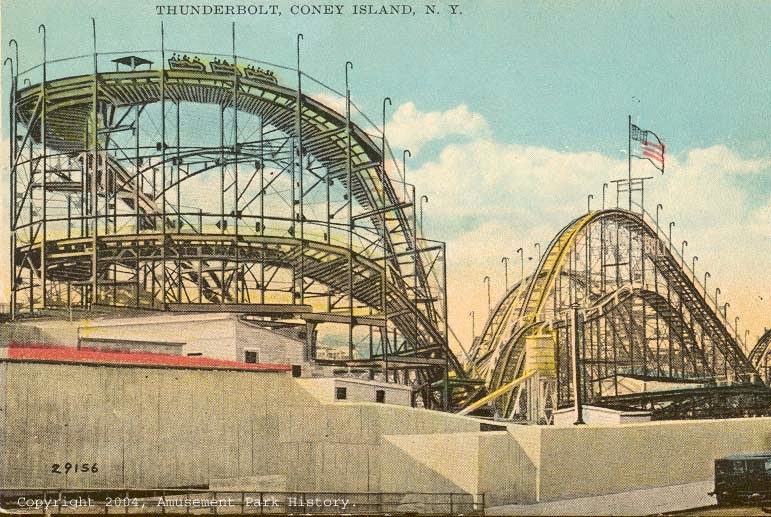 Coney Island gets a brand new star attraction this week — the 2,000-feet Thunderbolt roller-coaster in Luna Park.  It’s “narrower than most apartments” (according to Gizmodo), a bright orange ribbon ride that squiggles, rises and plummets within a disturbingly wonky silhouette.

It also takes its name from one of Coney Island’s most famous roller-coasters, designed by famed ride designer John Miller. The Thunderbolt is considered by some to be one of Miller’s least impressive works. (The name is not even original; there are three other Miller-designed coasters named ‘Thunderbolt’.)

This jaunty “scenic railway,” as roller coasters were called then, was a huge success at its opening in 1925. One year later came the first accident, when the train “stalled half way up a steep incline, slipped back to the bottom of the dip and was crashed into by the succeeding train.” 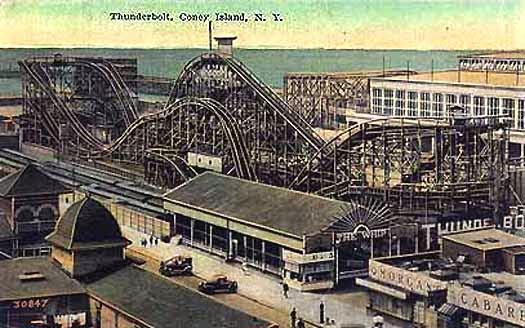 Twenty cents a ride, but a second one for fifteen cents. (Courtesy Brooklyn Memories) 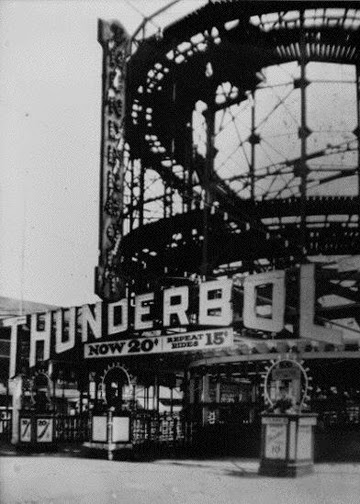 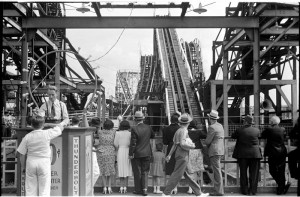 It’s perhaps the cinema’s most famous roller-coaster thanks to Woody Allen and the Oscar-winning film Annie Hall.  John Moran and his son Fred, the operators of the Thunderbolt, really did live underneath it, “the back stanchions of the steel structure come down through the walls of the apartment.”   His home was used in the film. [source] [source]

Fred Moran died in 1982, and the ride closed later that year, in great need of repairs that never came.  It famously sat abandoned during the 1980s-90s, embraced in weeds and surrounded by a rusty fence. The land was sold to Horace Bullard, owner of the Kansas Fried Chicken fast-food chain, who intended on reopening it.

He never managed to revive the Thunderbolt.   In 1991, the Moran house was destroyed in a fire, and the Thunderbolt itself succumbed to flames in 1998..  Its husk remained standing until it was controversially torn down (and with “deliberate indifference“) starting on November 17, 2000.

Below: The ruins of the Thunderbolt. And I believe the Moran home is also pictured her. (Courtesy the blog Coney Island Playground of the World) 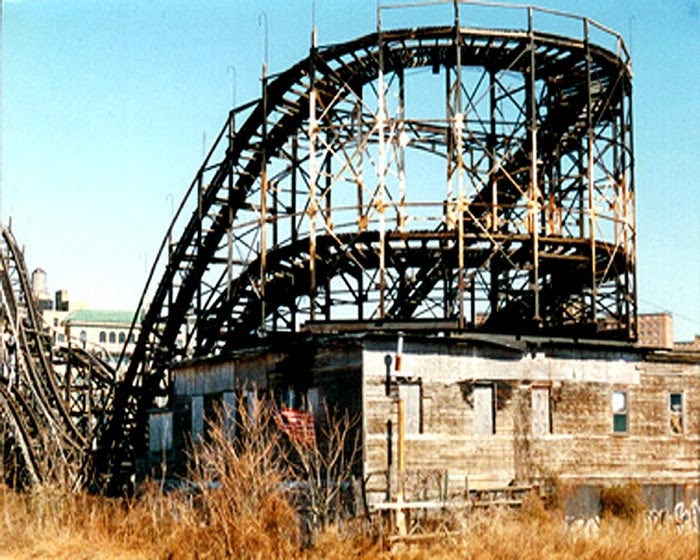 Why rush the destruction of an artifact that, by that time, was one of New York’s best known ruins and a mecca for nostalgists?  The city was looking to lure minor league teams to New York, and with the construction of the new KeySpan Park, the nearby ruin was considered an “eyesore that looked dangerous.”

Ironically, the baseball team that would move into KeySpan would be named after Coney Island’s other famous roller-coaster — the Cyclone.


Less than 14 years later, a new Thunderbolt will make its debut near this very spot.

I’m normally against knocking down landmarks (especially on the sly, like the City did with the Thunderbolt), but the burned husk of the Thunderbolt really looked like it was beyond repair back in the late 1990s. It probably cost less to build a new coaster than it would have to refurbish the original. Compared to other destroyed landmarks it was a mercy-killing.

Can’t save them all, unfortunately.

The willfull demolition of an iconic piece of Americana, gives testimony to the eventual, if not inevitable, destruction of ourselves.

And here we are in 2021 suffering this prophecy.

If you grew up with it, it signals how old and maybe useless you are and will become….sad, nobody cares today. Many years ago,
I worked for the Municipal Archives and record center and saw Many other things come down without a thought. the distraction of memories is sad. You can’t keep it all but the beautiful things…..sigh..they can and will never be replaced.

I had memories of riding this coaster in l954 when I was 14. What a ride….. the best and then went on the Parachute Jump. The best years of my life Coney Island…………

Yes, some things are fleeting, and the young people will never know some things, like the Thunderbolt or the dismantled and stored Dante’s Inferno spook ride from the former Astroland, or Hell Hole rotor, etc. There is a similar Dante’s ride at Morey’s Pier in North Wildwood, NJ that was renovated. And there was a Hell Hole opened from the 60’s to 1983 on neighboring Sportland Pier in North Wildwood.

I rode the Thunderbolt in the summer of 1981 with a friend. As we came around a curve on the Roller Coaster, the bar across us flew opened. I grabbed the bar and slammed it close as fast as possible. I guess it was a great ride but the fact that the bar flew opened caused me to not remember much of the the actual ride and I was so happy we survived the ride. I told the guys who closed the bar working there what happened and they did not seemed alarmed as I. That was my memory of the Thunderbolt. It close two year after forever after that summer to never open again. I guess it was on it’s way out. I am sorry it did not become a landmark.

Wow, small world. My cousin had the exact same experience on the Thunderbolt in summer of ’81. Maybe it was the same train, or maybe the bars were always busted back then. I remember the whole park was super sketchy and run down, but a lot of fun.

It’s too bad that it could not have been repaired and reopened. I hate the new Thunderbolt. It’s not enjoyable, It is actually quite a painful experience to ride and it is a piece of shit. It does not match up to the old wooden Rollercoaster that was the true Thunderbolt.

I’m one of the maintenance men from the Cyclone, and ot would have been a pleasure to have brought Thunderbolt back to life, if it wasn’t for the mayor whom robbed coney island in the middle of the night of our precious history 😑

So true. Worst thing that “mindless of cherished memories” mayor did
calling it nothing more then an eyesore next to his pristine new ballpark.
I miss the house, underneath!!
Some of us grew up living on those 3 iconic coasters for 10 years
of our life.

I worked in jones walk at my family’s ballon game , popoo, unk Tone, unk Bobby grabbed me one Sunday while my cousin Tommy watched the game, every body in the walk knew everybody , charley girlac, Eddie use ,ran the archery with jimmy( bimbo), joe in the bottle game , the Chinese old man with the minor birds that gave you a fortune for a dime !well I won’t bore you any longer but my fantastic memories of Coney Island are embedded deep in my heart , they day they grabbed me (. Dragged me on the cyclone first car first seat scared the shit out of me my inks were laughing I thought it was over but it wasn’t they took me the same way on the Thunderbolt ! Had a great time?’ Then there was another over yonder on the Bowery walk the tornado All Wood. No lights. Rickety alittle slower but another great coaster under neath it’s was a spook house ! My fond memories of coney are treasured , unk Bob and me only ones left he lives by my shop and sometimes stops by , we great each other with the saying ( how bout it buddy here’s an easy one ! We both have the same feelings bout coney, and wish there was a time machine to bring us back to 1967 walking past the cavalcade scooter ride ! When they asked me what to name my oldies show at makerpark radio I said The cavalcade scooter ride , and paid tribute to that old black DJ from the 40s who played all the hits of the season , apple peaches pumpkin pie , stone soul picnic, higher and higher and so many more I’d watch him play the crowd till late at night , they did the bugaloo the shingaling, and so many funky dance move people had in front of the ride it was better watching them dance than the ride , and he blasted great music! Well that’s all for now till they devilupe a head gear to watch memories on ya TV wow emagine , I was only 12 I was there till 19. By for now hoped you enjoyed part of my lil story (. Coney4eva👍

I was the last person to ride it. It was after it closed down for good, yet the owner still hoped to make repairs. One night a lone worker who popped up from the weeds asked me, “Do you want to ride?” and he set the thing in motion. A hammer laid on the fllor of the car by my feet as it moved forward and up the first hill. Pieces of wooden support for the tracks were missing here and there, and I thought I was going to die. It went around in the complete darkness, finally coming to a halt. and I knew right then I made history.

On the Saturday, after the Thunderbolt had been torn down , I went to Coney Island and took a picture of one of the cars used on the roller coaster . Every time I look at it , it makes me realize what a great part of the history of Coney Island this roller coaster must have been .