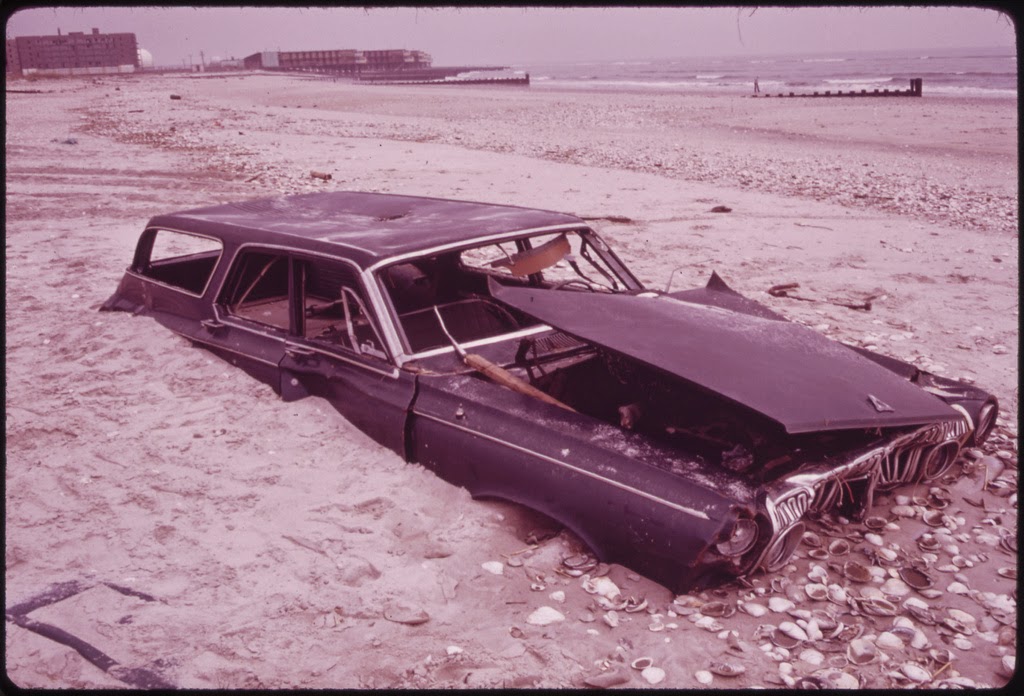 The fate of an automobile at Breezy Point, 1973 (Courtesy US National Archives)

The abandoned car, that most dramatic symbol of urban blight, is a sight that has pretty much vanished from most New York City streets. (Most, not all.)

In a city refitted for the automobile by the mid 20th century, people just began leaving their cars everywhere, either vandalized beyond repair or too expensive to tow when their vehicles became unusable. These husks of metal were scavenged for parts, then left to rust, the city’s sanitation crews unable to keep pace of the growing problem.

I recently found an intriguing article in New York Magazine from 45 years ago, titled “Stripped and Abandoned,” outlining the causes of the city’s sudden population of vehicular remains:

“Last year, by Department of Sanitation records, 31,578 cars were abandoned in New York City. Some were wrecks; some were stolen, then stripped; some were involved … in minor highway mishaps which caused their owners to leave them — to expert instant strippers, who evidently abound.”

By 1969, the problem had grown so unwieldy that the city hired third-party contractors to take care of most of it, but its budget for such removal would only shrink as the city entered the hard-knock 1970s.

Within a few years, the city would not even bother to remove such blight from certain neighborhoods.

“At any one time,” wrote author Fred Ferretti in 1969, “there are about 2,000 cars strewn about the highways and local streets.”

Below: From the New York Magazine article, the fate of a vehicle in Clinton Hill, Brooklyn, and on Delancey Street in the Lower East Side (photos by Robert D’Alessandro): 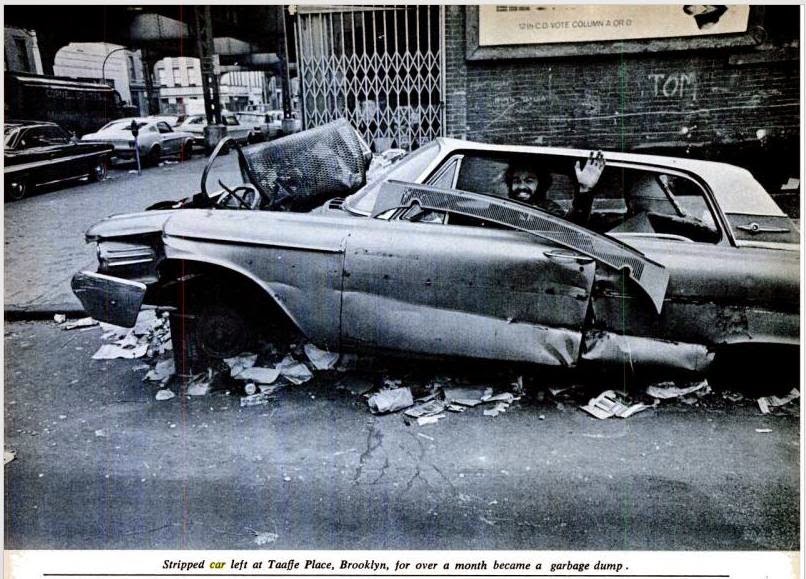 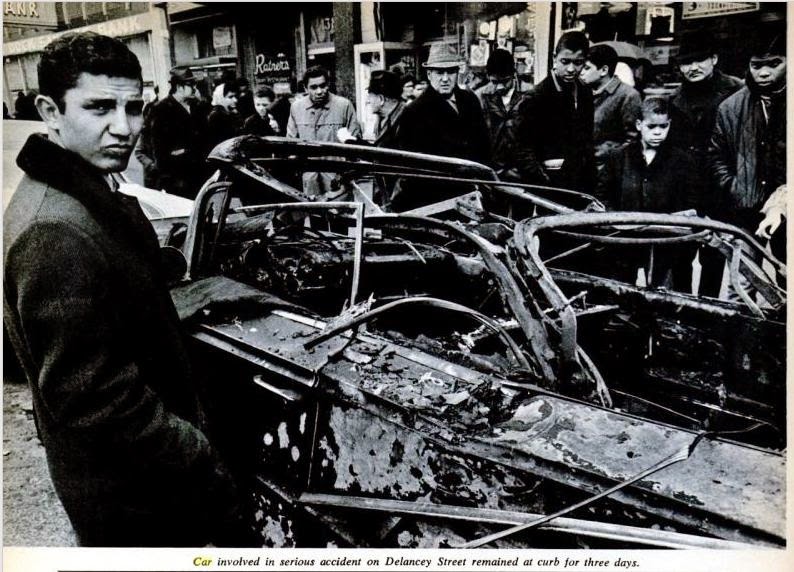 In 1970, standing in stark contrast to a city of polluted, automotive remains, one artist at the very first Earth Day celebration in Union Square attempted to address the problem. Â A crushed sedan sat alongside the environmental merriment with a sign: “57,742 Cars Removed in 1969; 21,635 Removed in 1970, as of April 21.” Â The New York Times would later note a total of 72,961 abandoned cars in 1970. [source] [source]

They weren’t just eye sores. What wasn’t pilfered or siphoned out was left to rot in the elements, leaking oil, attracting vermin.

New York City was only one problem spot within a new American crisis, with millions and millions of cars across the country already overfilling scrap yards. Here, however, it was a harbinger of hard times on the way.

“Everywhere you look, there are abandoned cars, stripped and junked,” said one resident of Brownsville, Brooklyn, returning to his deteriorating neighborhood in 1970. 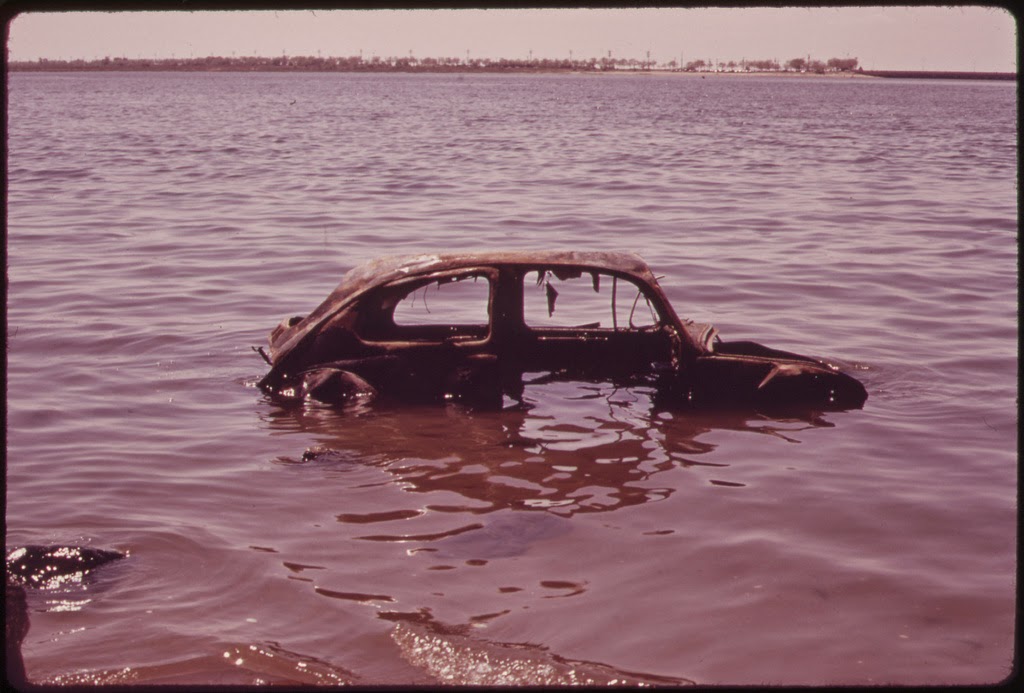 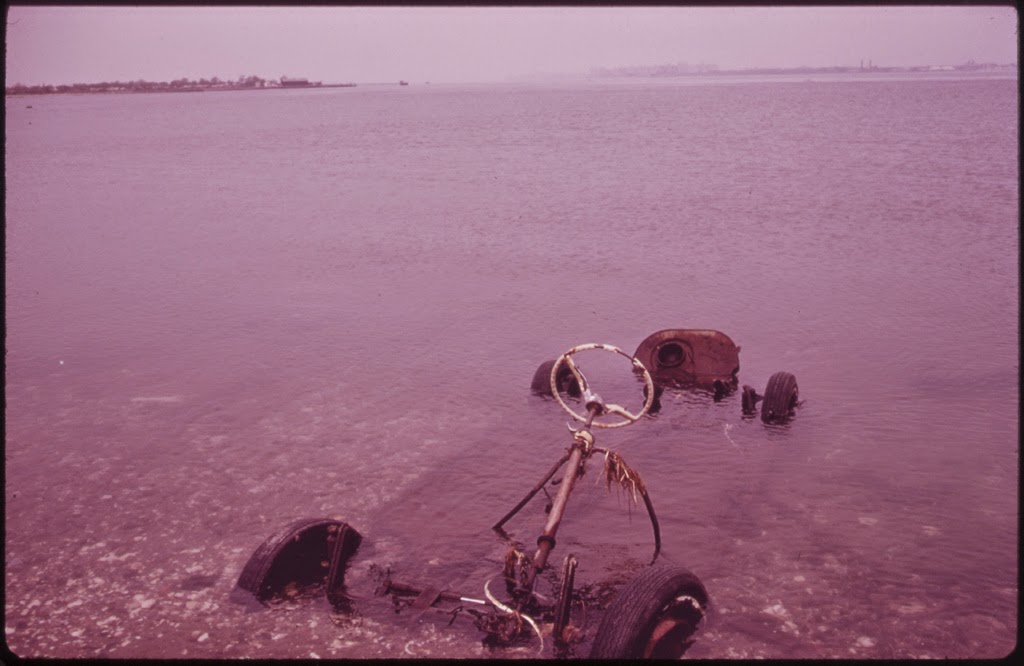 Abandoned vehicles became the New York Sanitation Department’s biggest issue in the 1970s, although by the new decade, there was some improvement. According to a New York Times article from 1981:

“Total abandoned-car collections declined from more than 79,000 in 1978 to 33,112 last year and to 14,900 in the first half of this year, officials said. Robert Hennelly, chief of cleaning operations, said he thought the drop was ”perhaps because the cost of cars has gotten so high that people are holding on to them longer.”

Some cynically still considered the abandoned vehicle to be a recognizable mark of New York City, even in the 1980s, a sort of native animal.

Not that an abandoned car couldn’t have some useful purpose, as this picture by Camily Jose Vergara illustrates. (Click here for more of his terrific photography) 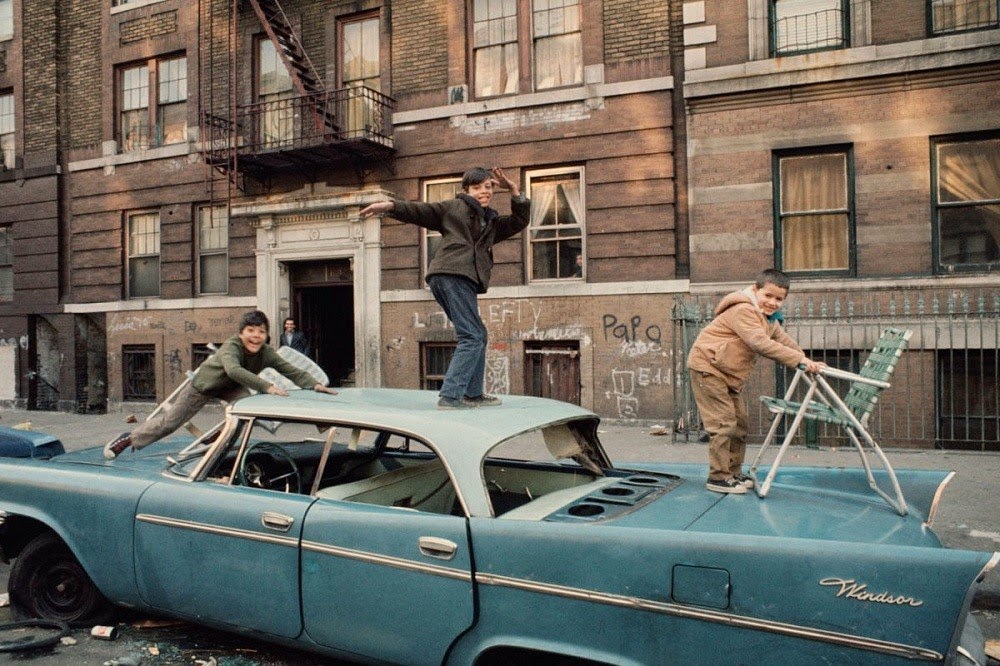 With the general infrastructural improvement of the city during the 1990s, the beast had receded somewhat from view in most neighborhoods.

There are still abandoned cars galore — here’s the city’s current policy for reporting derelict vehicles — but few are so unscrupulously picked clean or left to decay into a rusty shell.

Below: As with the others above, Jamaica Bay 1973, near JFK Airport (US National Archives) 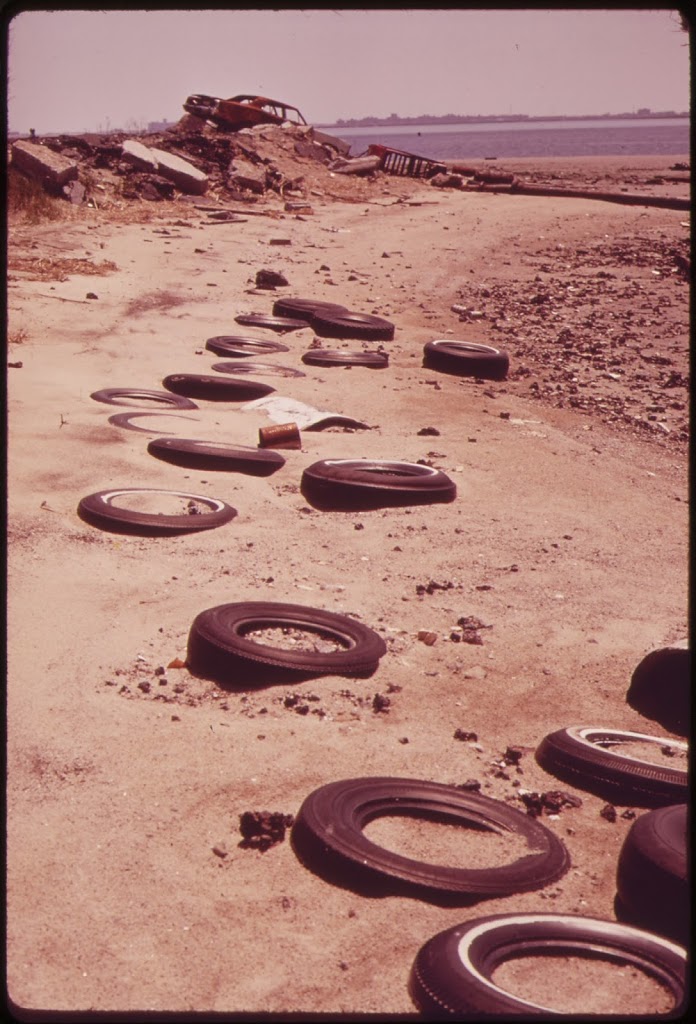 Ahh, memories. I remember as a kid looking out of the car window along the parkways heading upstate from Long Island or the Belt Parkway into Brooklyn were like driving through archaeological excavation sites. I always wondered how they got the cars so far into the channels – you could see them way out there in low tide.

Living near the Cross Island Parkway just on the Queens line, they would leave cars in the underpass near us all the way into the early 80s.

When on the Queens side, they’d be there so long exploring them we’d often find that older boys (I assume) had stashed caches of Playboy magazines in them.

I remember staying with my aunt and seeing cars like this as we drove into Queens. Imagine how much these cars would be worth now – I am sure some people are sorry they abandoned them.

During the early winter of 1969, my mom was driving north on Central Avenue in Yonkers, New York and stopped at the traffic light at Jackson Avenue. I saw a frame of a car’s convertible roof through the thinned out trees of the winter, up high on an embankment at the southwest corner of the intersection. At this location now is a Greek Restaurant.
Seven months later, in June of 1970, five of my friends and I rode our bicycles to the woods that was in full bloom, to see what kind of car was in there. We accessed the woods on Jackson Avenue through a dirt road. near a small travel agency that had been overgrown with brush. When we got into the area where the convertible was, we thought we hit the jackpot. We found nine stripped cars in the forest. There was a 1950 Ford convertible. a 1952 Chevy convertible, a black 1957 Chevy two door, two 55 Chevys, a 55 Oldsmobile, a blue 56 Ford, an overturned pink and white 55 Ford and a black 58 Plymouth. These cars had been there for a very long time. Some of them maybe more than ten years. Most of them appeared to have been stolen and never discovered. Many of them had the wires cut at the ignition switch. The 55-57 Chevys had been V8 cars and they had been relieved of their engines and transmissions. West of the wooded area was a burned out bowling alley. West of where the bowling alley once stood was another wooded embankment. We went into the woods and found more cars. There was a black 56 Chevy missing its front clip, engine and transmission. It appeared to have been someone’s stolen hot rod. It’s firewall and front frame had been painted white and had a hole in the transmission tunnel for a stick shift. There was a dark green overturned 55 Chevy without its engine and transmission resting against a tree, and an orange Sunbeam tiger without its engine. I had heard from a good source a couple of years later, the early Tanglewood gang had brought those cars in there and stripped them for their own hot rods they raced.
During the following summer, my friend Bruce and I were exploring the wooded area in Cross County, Yonkers next to an abandoned amusement park called Adventures Inn. The woods had old abandoned streets and some houses in it. It was very dark, even in the daylight due to the trees on each sides of the broken up asphalt streets intertwining with each other. We found two Impala SS’s. One was a 61 and the other a 63 or 64. Both of them were relieved of their engines and transmissions. There were two late 50’s VW Beetles with there engines gone. One of them was the old fabric style sunroof type. We were about to leave and my I caught a glimmer of chrome through a group of tall sunflowers down a hill, on another broken up asphalt street. Bruce and I walked down the broken up asphalt road with grass and small bushes growing out of it where the sunflowers were. The sunflowers were taller than us. We pushed though them and came into a small clearing, where we were shocked to see a stripped green and white 1958 Corvette. It was up on top of large boulders and oil drums. Probably to facilitate the thieves for removing its engine and transmission. We were 12 and 13 years old. We never found a stripped Corvette and felt it was a sacrilegious thing to do something like that to a Corvette. We both stopped frozen in our tracks. looked at each other and in unison said to each other, “Holy s–t!” I remember, with the exception of its engine, transmission, the bumpers, top and hood, it was pretty much there to restore by today’s standards. The rear axle housing was still in it, but its axles and center section was gone. As I walked around the front of it and looked at it with its missing quad headlamps and neglected dark green paint, it reminded me of a dead frog.
I thought of the probable scenario of the car being stolen one summer night and followed into the desolate forest by a group of black leather jacketed hot rodders. White T-shirts, greased back hair and a pack of cigarettes rolled up in their shoulder sleeve. This group was dishonest and one of them needed the Vette’s engine for his 55 Chevy. They were probably following the Vette in a station wagon or van equipped with all the tools they need to strip it. The may have even brought a couple of six packs to pass the time as they stripped it.
It’s 49 years later now and I took an art class. I remember both of these places almost like yesterday. The art teacher asked us to draw something we remember very well. I drew drawings of both of these places and hung them up in my home. I sent Bruce a copy. He got in touch with me and told me it was a blast from the past.

Hey Ernest, I just read your comment and enjoyed it so much that I legitimately forgot I wasn’t reading another article! Great storytelling and imagery. I, too, grew up finding wrecked and abandoned cars in the woods, but a bit later and a bit further north (the ’80s around the border of Westchester and Putnam Counties where there are a bunch of abandoned mines). To think if we’d found these cars as 13 year olds today we’d have phones in our pockets with cameras! Great stories, thanks

Enrique,
You’re right, you don’t know how I’m kicking myself in the a– for not being a kid photographing everything. Good thing I have a photographic memory.
I’m not good with this computer stuff, but if you can figure out a way for us to get in touch, I would be happy to send you copies of the 20 X 24″ drawings for old times sake! I realize I can’t put my email or phone number on this. Ernest

Ernest,
It appears that you and Loretta have the story writing gene,
Was nice to read, but you never did say if you and your friends
took any of these cars to restore them
Sonny