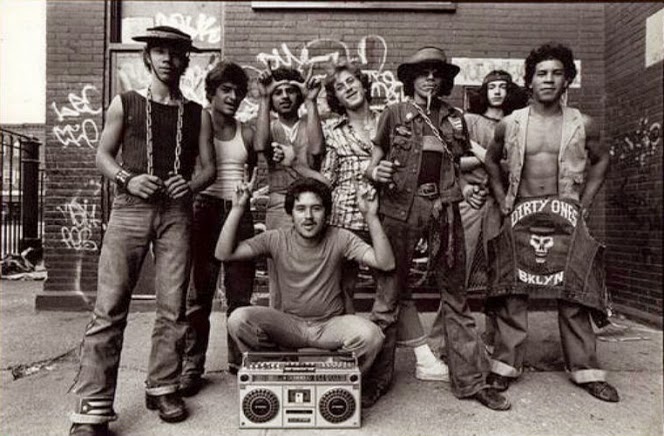 The Dirty Ones, a notorious gang from Williamsburg.

My new column for A24 Films (a tie-in to the new movie A Most Violent Year) is up on their site devoted to culture and events from 1981.

For this article, I look at what some of the dangerous undercurrents to life inÂ Williamsburg, Brooklyn, in 1981. “By the 1970s, Williamsburg was best known for its steeply rising crime rate, harboring both violent street-gang activity and organized crime.” You can read the whole article here.

During my research for this piece, I found this rather startling map in the New York Times, August 1, 1974, charting out the various turfs of northern Brooklyn street gangs. Â This is not a souvenir from the film The Warriors, but an actual list of the many violent gangs which kept Brooklyn a very dangerous place to walk around in during the 1970s. 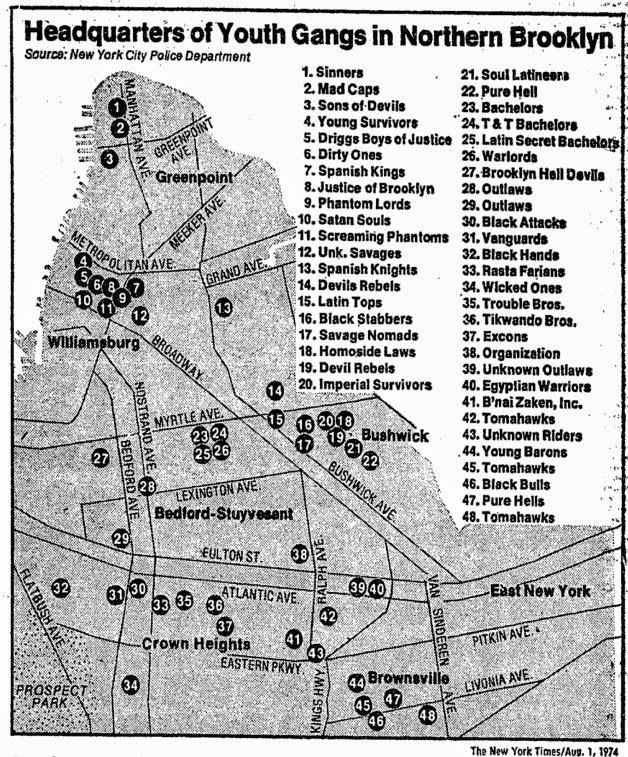 I dug a little further to find some specific incidents which involved some of these gangs. Â I’ve put numbers by the gangs so you can find their dedicated turf on the map above:

— September 16, 1972 — A gang altercation among the members of the Young Barons (44) resulted in the death of one young man and another whose nose was cut off.Â

— August 21, 1973 — Several members of the Devils Rebels (19) were walking around Bushwick when they were accosted by the Screaming Phantoms (11). Â Two boys associated with the Devils Rebels were stabbed and killed. Â Police report “the Screaming Phantoms operated out of the Williamsburg area and had been ‘way out of their area’ at the scene of yesterday’s gang fight.”

23 replies on “Screaming Phantoms, Tomahawks, Phantom Lords, Dirty Ones and other gangs of 1970s Williamsburg, Brooklyn”

The Dirty Ones and several Williamsburg were featured in an ABC special form 1978, YOUTH TERROR: THE VIEW FROM BEHIND THE GUN — it was one of those Scared Straight-type uncensored documentaries the 70’s were amazing for. I remember watching this as a kid, terrified.

Ware the Tomahawks the largest street in Brooklyn and how many members. Thank you.

No the Tomahawks weren’t the biggest gang in Bklyn.

What I don’t remember are all those gangs on that map only the Savage Nomads and the Bachelors and Phantom Lords was real known plus there was a gang in Coney Island I can’t remember their name but they were down.

The “Homicides Inc.” were from Coney Island.

I don’t remember all those gang’s on the map I’m a LTD OUTLAW!!!!!!I remember Tomahawk, Excons Latin OUTLAWS in Bed-sty

I remember all of the clubs on the map. The Screaming Phantoms in particular were not that numerous, but were respected in the Bronx, Brooklyn and Queens. They were down to fight anyone, anywhere and did not hesitate to stab or beat their rivals into submission, a hospital emergency room or the morgue.
To their credit they helped out the kids in their neighborhoods by not allowing older kids to bully or rip them off. The down side of this relationship is that they taught us how to steal, drink and smoke pot.

Wow, I was affiliated with the SP in the Bronx, Monroe and Anthony Aves. Alfie was the prez. Memories

If this is Ronnie M, contact me at nortwoods4me@/gmail.com

Where is the FMD’s Filthy Madd Dogs??? Use to see them in Bklyn on a reg…Bathing in the circle at Grand Army Plaza/Atlantic Antic…

What’s up
What was the images on their jackes? How was it laid out?

Is this Hippie from Saratoga Avenue?

Some good time & some bad times lost some good Brother & sister Back then.

I remember correctly in e.n.y Brooklyn where the crazy homicide on Sutter avenue and the sex boys on pitken and sex st.”aka”Essex and the tomahawks Livonia avenue around junior st I know this because I hang around doing graffiti though eny neighbor hood with my boys” rip CISCO1″,BIRD3 LEO2 JR,JUNE,riding on our bikes looking like coppers getting chance around,the 70s were Crazy but fun.

In 1975 a group of Ex-Vandals made the mistake of leaving their slum and robbed an old Italian woman on Stillwell Avenue. Three of them were caught and beaten for 2 days before being released.