Last night the Guides Association of New York City (GANYC) presented their first-ever GANYC Apple Awards at the Leonard Nimoy Thalia Theater (part of Symphony Space), honoring accomplishments in preservation, history, museum exhibition and tourism. It was a ratherÂ livelyÂ evening, thanks to the night’s hilarious hostsÂ Kevin James Doyle and Olivia PetzyÂ whom you may know from the off-Broadway hit How 2 B A New Yorker.

TheÂ institutions and individuals honored at the ceremony last night include:

— Â the Friends of the High Line

— William Helmreich and his book The New York Nobody Knows: 6,000 Miles In The City

— The Museum of the City of New York‘s exhibitionÂ Palaces For the People:Â Guastavino and the Art of Structural Tile

And a lifetime achievement award was presented to artist James Turrell who transformed the Guggenheim Museum in 2013 into a surreal cathedral of light.

And look who else won an award! 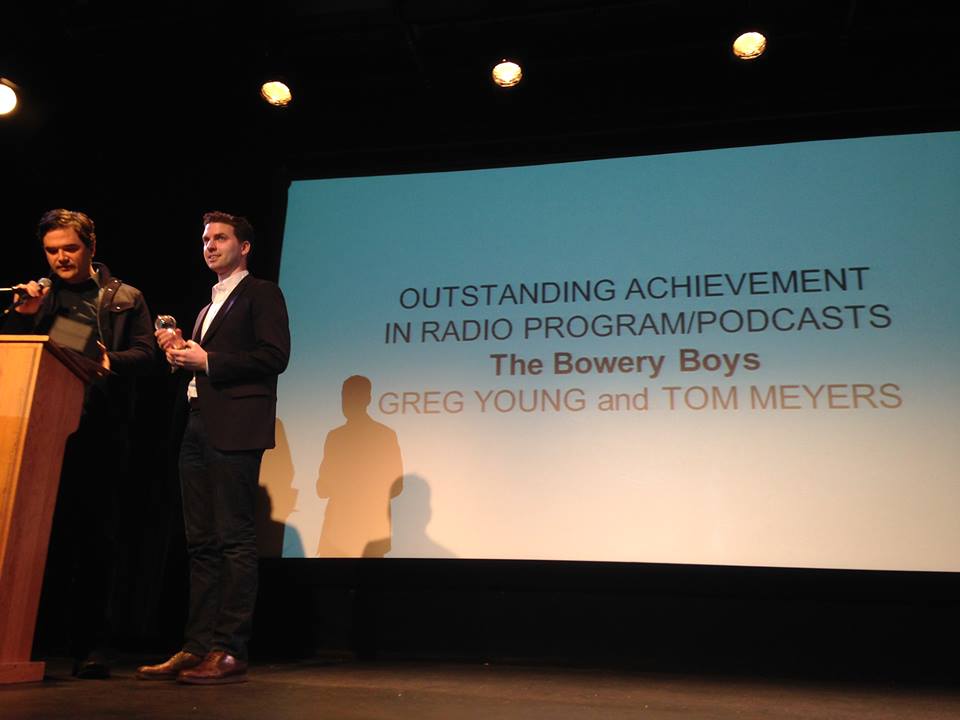 Thank you GANYC for this incredibleÂ honor! We are truly grateful forÂ the recognition. Actually we were just honored to be invited in the first place so this was especially humbling!Â It was quite fantastic seeingÂ all these different kinds of people — journalists, curators, filmmakers, politicians, tour guides, entertainers — together in one room to celebrate New York’s rich culture and historical legacy.

The award was presented to us by Ethel Sheffer from the Municipal Art Society who prefaced it withÂ a movingÂ tribute to her husband Â Isaiah Sheffer, the founder of Symphony Space, and the man whoÂ helped save the very theater we were sitting in — Leonard Nimoy!

TheÂ building which contains the theater today was built one hundred years ago as an indoor market, owned by the Astor family. Â In 1931 the basement was converted into the Thalia Theater. (Thalia is the ancient Greek Muse of comedy and idyllic poetry.) Â To quote GANYC award winner in his history of the Thalia:

“Generations of Thalia patrons have assumed that its oddly sloping floor – with a depression in the middle – was the result of poor planning or unusual site conditions. But the Thalia’s parabolic reverse floor – apparently the first of its kind in the country – was just what its designer, Ben Schlanger, intended.

In Mr. Schlanger’s view, most movie theaters were poor adaptations of theater designs. The Thalia incorporated not only Mr. Schlanger’s patented floor system – designed to give everyone in the audience the same view of the screen – but also lighting, seating and projection provisions intended specifically for movie presentations.”

The ThaliaÂ is best known for showing art house moviesÂ and classicÂ film revivals for decades. One might even say it was archetypalÂ of the Upper West Side experience, immortalized in the movie Annie Hall. 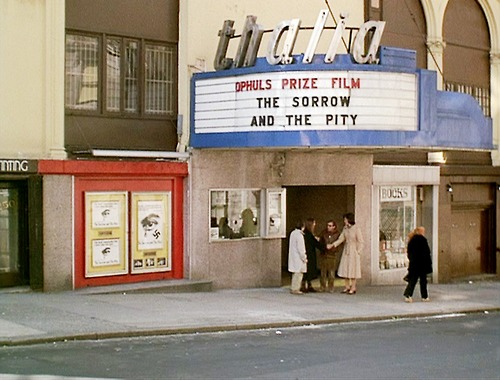 Martin Scorsese attributes part of his cinematic educationÂ to the Thalia: Â “That’s where I learned about films. I saw my first Eisenstein there: Alexander Nevsky. I also saw the Yiddish film series there: The Dybbuk and Green Fields and the films of Edgar G. Ulmer. It was the late 50’s. I saw Citizen Kane there and it was amazing on the big screen — well, the little screen. The films were programmed so that there was no intermission: one would end and the other would begin. It was really hard core. It was better than film school. It really was.” [source]

It was actually renowned for being a bit of a dump. According to GANYC nomineeÂ Clyde Haberman: “The air in the theater seemed left over from F.D.R.’s third term. Your seat was no thrill, either. It was upright, uncomfortable and usually torn. Pillars stood between it and the screen.”

The theater finally closed in 1987. Â Its final screening was a double bill:Â The Night of the Shooting Stars and Paisan.Â During the 1990s, Â its classic Art Deco interiors were removed to some controversy. Â But its ultimate savior would come in the form of a science-fiction icon.

Leonard Nimoy, forever belovedÂ as Spock from Star Trek, does have a background in theater — in 1977, he even performed in Equus on Broadway — and his work would sometimes be performed at Symphony Space.

By 2001, he was living in the Upper West Side, mostly occupied with his work asÂ an acclaimed photographer. Â Nimoy donated $1.5 million to the complete renovation of the theater which finally reopened in April 2002. In honor of the donation, the theater was renamed in his honor. Â And, Â honestly, the Leonard Nimoy Thalia just sounds cool too.

Congratulations! I knew you’d win! You guys are the best!

I congratulated GANYC for the Apple Awards and wondered why I hadn’t been nominated. They said they’d never heard of me.

So I told the Apple Awards people that I’d solved the Big Apple, and dedicated Big Apple Corner, and used to give my work away for free to NYC tour guides such as Apple Tours. Then I’d solved the origin of “the Great White Way,” which comes from a 1901 novel of the Antarctic, and was named by Shep Friedman of the New York Evening Telegram in February 1902 after a snowstorm made Broadway white. Then I rediscovered model Audrey Munson, New York’s Miss Manhattan, who is currently being ignored in the 100th anniversary celebrations for San Francisco’s 1915 Panama-Pacific International Exposition. Then I….oh well, never mind.

You did a fashion article recently and you might want to do a piece on Women’s Wear Daily editor John Fairchild, who died last week. I wrote up his linguistic contributions–everything from “beautiful people (BP)” to the “in-and-out” list. He called La Grenouille restaurant “the Frog Pond.” He called the Garment Center the “Fashion District.” Women’s Wear Daily is digitized and is available in the New York Public Library.