Abraham Lincoln died 150 years ago todayÂ in a Washington DC rowhouse, shot and killed by the actor John Wilkes Booth whileÂ the president was attending a performance of Our American Cousin at Ford’s Theater the previous evening.

The news hit the North as some sort of horrible dream. Â Confederate general Robert E Lee had just surrendered to Ulysses S. Grant at Appomattox Courthouse less than a week. The war was over in the minds of many. How could this have happened?

On April 21, Lincoln’s body began a mournfulÂ tour of the United States, taken from cities across the country via a funeral train. Â Three days later, on April 24, the train with Lincoln’s body pulled into 30th Street Station, the depot which served the Hudson River Railroad back when the train brought passengers down the western side of Manhattan. (We give the details of this vanished station in our podcast on the High Line.)

From the New York Sun: “This morning the citizens of New Â York are called upon to pay funeral honors to the remains of one whose tragic death, invests the ceremonies with an interest never before felt for any individual, who has occupied the highest office which the suffrages of a free people can confer upon a citizen of the Republic.”

His body was taken to New York City Hall where he layÂ inÂ visitation for almost an complete twenty four hours. Thousands of New Yorkers came to pay their respects. Â In the afternoon of the April 25, his body was brought back to the 30th Street Station and transported to Albany, then to other cities, before its final destination in Springfield, Illinois. 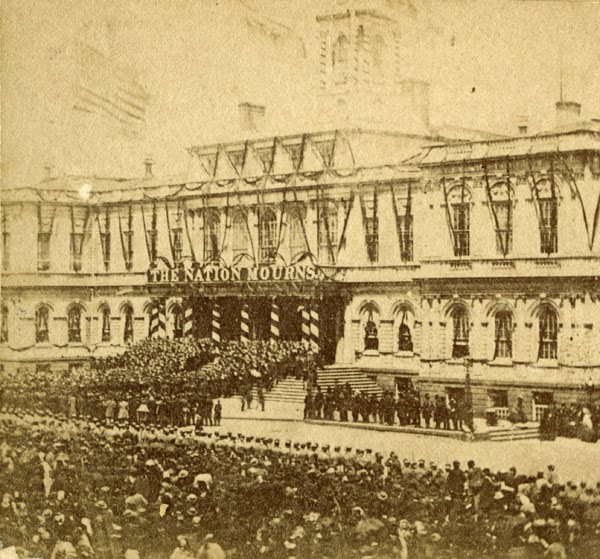 The Hudson River Railroad station is long gone. Standing in its place however is another large structure: Â the United States Postal Service mail processing facility at 341 9th Avenue.Â  Unless you’re a fan of postal history — or you’ve stumbled around the neighborhood after stepping of the High Line — you’ve probably never given this building much notice.

But visit the northern side of this building, and you’ll find the following plaque: 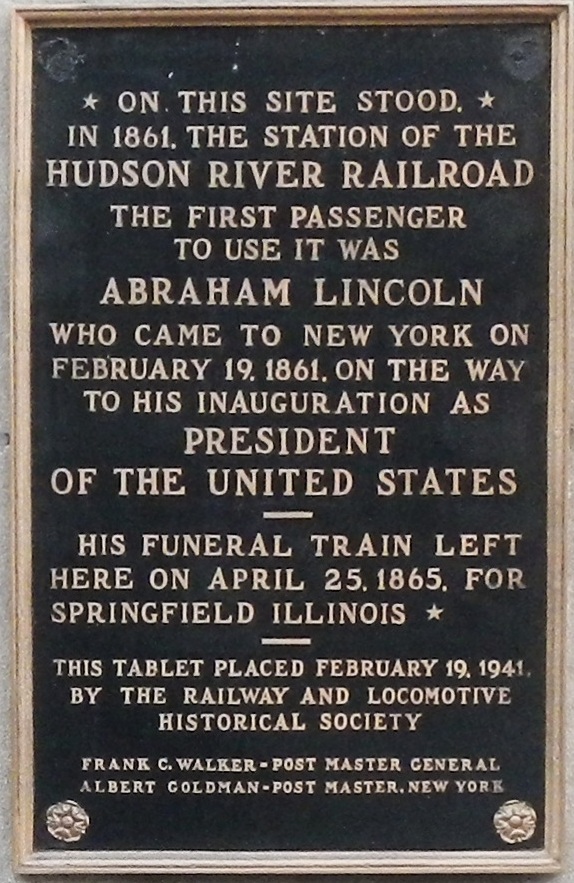 “On this site stood in 1861 the station of the Hudson River Railroad. The first passenger to use it was Abraham Lincoln, who came to New York on February 19, 1861 on his way to his inauguration as President of the United States. Â His funeral train left here on April 25, 1865 for Springfield, Illinois. Â This tablet placed February 19, 1941 by the Railway & Locomotive Historical Society.”

“In that strange and dirty locality where the Hudson River R.R. Company have fixed upon their uptown depot, thousands of people began to congregate fully two hours before the hour when the expected train was due…..The great gate of the depot yard through which the train was to enter was guarded by a cordon of police, and outside these limits surged the crowds, unusually patient for a New York crowd awaiting a sensation probably from a general faith that Old Abe could be depended upon to come to time properly.”

“Outside of the gate of the depot yard, on Tenth-avenue, the immense throng stationed there received in respectful and mournful silence the very brief and unsatisfactory glimpse they gained of the coffin of the dead President. Viewing with anxious eyes the train as it emerged from the gate, and gazing upon the gorgeously decorated car, and uncovering with sincere respect for the hallowed dead, the immense multitude beheld the departure of the train.Â

Â As the train fairly got into motion and disappeared round the curve, the immense mass of beings, so long kept within bounds, at last burst through all restraint, and the entire vicinity of the depot became the scene of the most extraordinary confusion. The police were totally inadequate to the impossible task of keeping the people in order, for they were carried like drift-wood before the flood as the impatient crowd broke up and started upon their several homeward ways.”

This plaque was placed on the side of the postal facility (called the Morgan Annex) on the afternoon of February 19, 1941, unveiled by the U.S. postmaster Albert Goldman. Â The organization who sponsored it, the Railway & Locomotive Historical Society, still operates today.

grateful to the boys for giving us yet another fascinating tidbit of NY and US history. time to make a pilgrimage.

Always look forward to your news of U.S.A information that is always of interest to a former New Yorker now living in .anadq

Fascinating. NYC never fails to surprise. Every part of the city holds some unexpected gem of historical significance.