Our last podcast detailed the scandalous murder of Stanford White in 1906, on the rooftop of the very building be had himself designed — Madison Square Garden. Â But another performance venue just a short distance away was also involved in a notorious murder of a prominent New Yorker three decades early.

You might be surprised at the location ofÂ the venue in question — the Grand Opera House. It was located at the northwest corner of 23rd Street and Eighth Avenue.Â There’s a movie theaterÂ close by — and a theater for the School of Visual Arts just down the block –Â but I’d hardly call this intersection an entertainment mecca.

The opera house sprang up in 1868, the project of Samuel N. Pike, who purchased the land directly from Chelsea estate owner Clement Clarke Moore himself. In fact, the original Moore estate was located only a block away.

The Pike Opera House, as it was called in those days, was Pike’s play for legitimacy in New York. A German immigrant who arrived in the U.S. in 1837, Pike lived in New York for a few years and made his fortunes in wine imports. Aspiring to upper-crust tastes, Pike fell in love with opera music after viewing performances by PT Barnum chanteuse Jenny Lind.

The author E.T. Harvey paintedÂ an extraordinary pictureÂ of Pike in 1916:

“Samuel N. Pike was an extraordinary man in many ways. In appearance he was rather above the middle height, and slender. He wore a Â heavy, full mustache, after the manner of that period, and though dark complexioned, had very piercing steel-gray eyes. He had a short, abrupt way of speaking, and though good to his employees, was not familiar with any of them. Â He always dressed in the height of fashion, wore a silk hat and used perfume……

He was crippled in one of his fingers, but in spite of this was accounted a fine amateur flute player.”

Pike constructed a massive opera house in his adopted home of Cincinnati in 1859 and many years later built a companion here in Manhattan at 23rd Street. Â It officially opened on January 9, 1868.

He was banking on the growth of the New YorkÂ theater along 23rd Street. Meanwhile theÂ wealthy preferred the Academy of Music down on 14th Street. While some stages would come to 23rd Street, it would be the arrival of retail and Ladies Mile that would come to define this street by the 1880s.

TheÂ theater was spectacular — perhaps too spectacular for the location. “A striking feature seen on entering is the grand foyer, the largest in any theater in the city, open in part to the roof. A stairway of unusual width leads to the balcony….The stage, one of the largest in New York, is eighty feet wide and seventy feet deep, and the green-room is much the most extensive in the city.” [Kings Handbook]

The following year, Pike sold his lavish hall to two rather unlikely investors — Jim Fisk and Jay Gould, grade-A robber barons, pals of Boss Tweed and the orchestrators of the Black Friday Panic of 1869. Why would these two nefarious characters want an opera house?

Below: A detail from the Grand Opera House taken in the 1930s

The house’s upper floors doubled as the offices of their own Erie Railway venture. Fisk’s mistress Josie Mansfield was frequently installed into productions at the now-named Grand Opera House; it was even rumored her next-door apartment was connected to the opera house with an underground tunnel.

However it does seem that Fisk and Gould were legitimately aficionados of the theater, or at very least fans of the elite who would attend them, and the profits that would follow. The Grand Opera House would soon showcase a great number of theater endeavors outside of opera.

But unfortunately for Fisk (pictured below) the greatest show the Grand Opera House ever presented was hisÂ own wake. 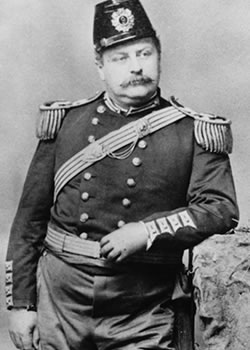 On January 6, 1872, Fisk was fatally shot at the Grand Central HotelÂ by Manfield’s new lover Edward Stiles Stokes. He died the following day. The robber baron was so associated with the Opera House that his body lay in state here, attended by thousands of mourners and perhaps tens of thousands of curiosity seekers.

“The showy coffin, liberally adorned with gold-plated ornaments, rested on two low stands, and in this, garbed in the gold-laced uniform of the colonel of the Ninth [regiment], lay Fisk, his mustache carefully waxed, white kid gloves on his hands, and his feet buried in white flowers, in various devices.” [source]

His business partner Gould would continue operating the Opera House for several years afterwards, eventually renting it out to vaudeville shows and ‘second-run’ Broadway productions, its fortunes disintegrating as theater moved uptown and the Chelsea neighborhood became more middle-class.

Like many old stages before it, the Grand Opera House switched to films in the 1920s. RKO tried its best to rehabilitate the space, hiring Thomas Lamb to renovate the theater with modern flourishes, reopening the space as the RKO 23rd Street TheatreÂ (seen below in 1927):

Outside the opera house-turned-movie theater:

The site remained a movie house through the 40s and 50s, finally closing on June 15, 1960. In a further indignity, the Opera House was thoroughly gutted in a fire.

Today a three-story office and retail building sits on the spot of the opera house. Most New Yorkers are familiar with this corner due to the Dallas BBQ which graces the corner. Fisk might have been way into their Texas-sized margaritas.

Portions of this story originally ran in an article on this site on August 18, 2009

That’s what I thought, so I looked it up. The photographer is Berenice Abbott and the photo was taken in 1937.

The 1937 double-header is “Married Before Breakfast,” with Robert Young and Florence Rice, and “Bank Alarm,” with Conrad Nagel.