The pulp-fiction storyteller, known for claustrophobic tales of the occult, lived for a time in Brooklyn. He did not enjoy it.

In 1924, he moved to  259 Parkside Avenue in Flatbush, Brooklyn, close to Ebbets Field and Prospect Park. When his new wife relocated for work in Cincinnati, Lovecraft moved from the pleasant Flatbush neighborhood to a small flat at 169 Clinton Street in Brooklyn. He only lived here until 1926 but during his stay, possessed of anxiety and neurosis, he practically starved himself.

Below: The boardinghouse at 169 Clinton Street, pictured here at left, from 1935. The first four buildings still exist. The building at the far right is the old Brooklyn Athenaeum.

Lovecraft had contempt for New York’s thriving immigrant population and those workers who sustained Brooklyn waterfront in the 1920s.

In particular he negatively interacted with the residents of Brooklyn’s so-called “Little Syria” on Atlantic Avenue.

I find his invective ugly and even a little obsessive, but it illustrates that occasional truth that the culture of New York City is simply not for everybody, especially if you have certain racist dispositions mixed with a little mental instability.

Below: Lovecraft in Brooklyn Heights in 1925. The house behind him may be his Clinton Street boarding house. Compare to the image above and the current view here. (Photo courtesy HPL.com) 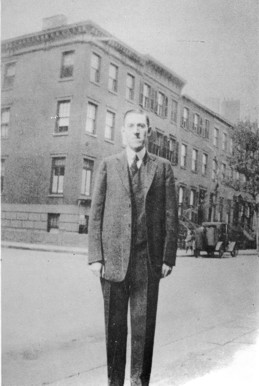 In a comparison with Philadelphia, Lovecraft wrote “[Philadelphia has] none of the crude, foreign hostility and underbreeding of New York — none of the vulgar trade spirit and plebian hustle.” He further described New York as “an Asiatic hell’s huddle of the world’s cowed, broken, inartistic, and unfit.” [source]

According to author Donald Tyson, “when [H.P.’s wife Sonia] and Lovecraft were walking the streets of New York and encountered a group of immigrants, Lovecraft would become so animated and enraged that she feared for his sanity.”

The renovated, wealthy houses of today’s Brooklyn Heights were oftenÂ working-class housing in the 1920s, many turned into affordable boarding houses. Lovecraft disliked his ethnic neighbors and held particular scorn for his Irish landlady. “Only later was I to learn of her shrewish tongue, desperate household negligence, miserly watchfulness of lights and unwatchfulness of repairs, and reckless indifference to the class of lodger she admitted.” [source]

He would have lived with mostly single men of differing ethnicity, many employed along the congested docks that lined the waterfront all the way down to Red Hook, culminating in two self-contained shipping areas — the Atlantic and Erie basins. Back in the 1920s, it was the busiest freight port in the entire world.

Below: Ships along the waterfront heading towards Red Hook, circa 1890

He seemed to filter all his untethered anxiety into the very building at 169 Clinton Street. “I conceived the idea that the great brownstone house was a malignly sentient thing — a dead, vampire creature which sucked something out of those within it and implanted in them the seeds of some horrible and immaterial psychic growth.”

Yet Lovecraft saved his greater fantasies for the neighborhood south of here. He eventually funneled all this tortured and deranged hysteria into his horror writing with the publication of “The Horror at Red Hook,” a story that literally depicts the neighborhood as a gateway to Hell.

Naturally he wrote it over a two-day period from the Brooklyn Heights boardinghouse.

Below (the next two pictures): Some striking illustrations by Robert Cummings Wiseman of shanties around the Atlantic Basin in 1930, courtesy the Museum of the City of New York 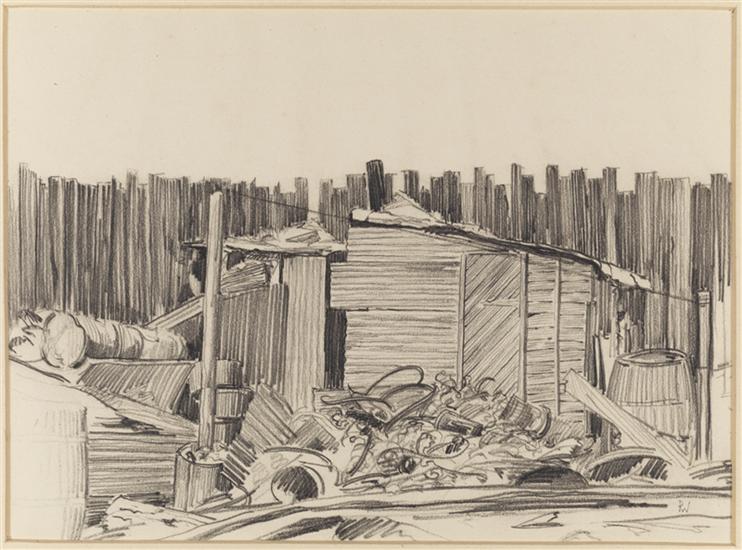 The short story, one of his best known, is an amusing curiosity to read today.

Its a muddled, sometimes incomprehensible work with some occasional flashes of creepy description. Clearly the story is self-therapy as much as it is an actual story, an early 20th century entry in the field of conspiratorial fiction. It’s undeniably haunting if you manage to forgive the vast amount of virulent, anti-immigrant description:

“Red Hook is a maze of hybrid squalor near the ancient waterfront opposite Governor’s Island, with dirty highways climbing the hill from the wharves to that higher ground where the decayed lengths of Clinton and Court Streets lead off toward the Borough Hall. Its houses are mostly of brick, dating from the first quarter to the middle of the nineteenth century, and some of the obscurer alleys and byways have that alluring antique flavour which conventional reading leads us to call “Dickensianâ.”

The population is a hopeless tangle and enigma; Syrian, Spanish, Italian, and negro elements impinging upon one another, and fragments of Scandinavian and American belts lying not far distant. It is a babel of sound and filth, and sends out strange cries to answer the lapping of oily waves at its grimy piers and the monstrous organ litanies of the harbour whistles.”

I won’t spoil any of the plot points of the story. (If you’re interested in reading ‘The Horror At Red Hook’, you can check it out here. ) But let’s just say the author confirms his suspicions — the street gangs and liquor rackets of the Prohibition era are really just dens of age-old evil:

“The soul of the beast is omnipresent and triumphant, and Red Hook’s legions of blear-eyed, pockmarked youths still chant and curse and howl as they file from abyss to abyss, none knows whence or whither, pushed on by blind laws of biology which they may never understand. As of old, more people enter Red Hook than leave it on the landward side, and there are already rumours of new canals running underground to certain centres of traffic in liquor and less mentionable things.”

The story would be published in 1927 in the pulp magazineÂ Weird Tales. Notably, their offices were in Chicago, not in New York 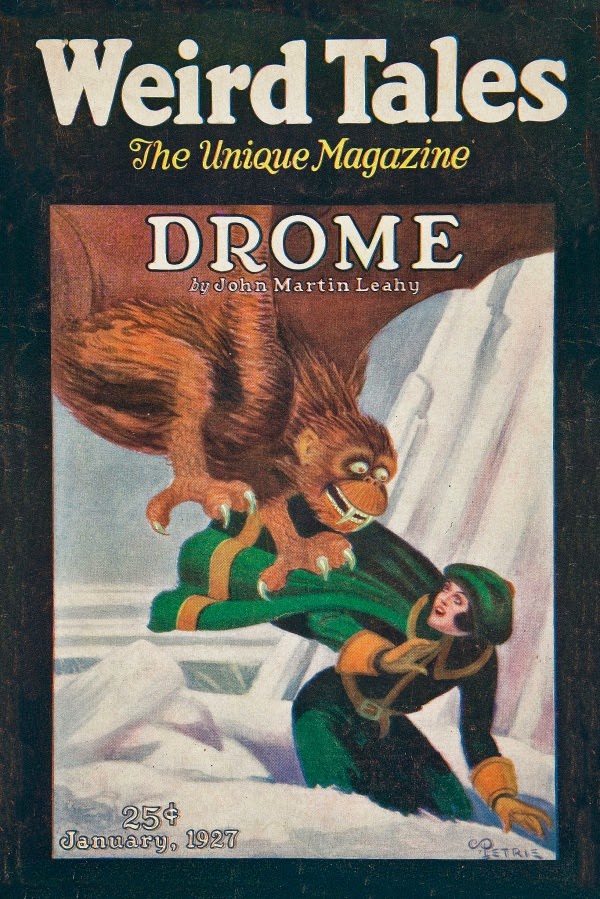 Once he left New York, he pursued some of his more famous writing projects, using his anxiety to more disturbing effect in runic, terror-filled stories of the occult. He died in 1937, revered by many as a truly boundary-breaking writer, greatly inspiring writers like Stephen King.

It would be almost fifty years before an author attempted to look at south Brooklyn with similar monstrous intent — in the 1970s horror novels The Sentinel and The Guardian by Jeffrey Konvitz.

Top picture: Detail from a 1897 Rand McNally map of Brooklyn

Can I ask what source(s) you used on Lovecrafts biography? Also do you have a credit for the photo of Lovecraft on Clinton St?

Oops! I’ll add the credit to the post. The links in the article are to a few HPL books I looked into, plus the Lovecraft Encyclopedia and the Annotated HPL.

I was born and raised in Red Hook, and all I can say is that it is a dreadful place. I have always called it the “armpit of Brooklyn ” .

Motivates you to become more than your neighborhood.

â€œWhen [H.P.â€™sÂ wife Sonia] and Lovecraft were walking the streets of New York and encountered a group of immigrants, Lovecraft would become so animated and enraged that she feared for his sanity.â€

Interesting – I feel EXACTLY the same way when I see the daily parade of gentripr*ck hipster transplants.

The second photo of Lovecraft is on the corner in front of his Clinton St Boarding house, but the camera is facing away from 169 Clinton St and toward the buildings on the opposite corner. Turn 180 degrees in the linked Google Street View, and you will see those four buildings in the photo still exist barely changed.

Iâ€™m guessing the buildings behind HPL include 182 Clinton St., the home of Bill Wilson, who by 1935 had co-founded Alcoholics Anonymous. His wife Lois had been born in that house. Forces of dark and light, living diagonally across from each other.

Thanks interesting. I am always struck by the absence of trees on these now tree lined blocks.

Fascinating article. I must read the story now. But as for monstrous descriptions of South Brooklyn, how about Last Exit to Brooklyn, from 1964?

His middle name was Phillips, which was the same as his mother’s maiden name. Old Providence family that fell on hard times. Originally ‘Di Filippo’ before Americanized. Mr. Champion of the White Race was half-Italian.

The sketches are of the shanty town that was near Erie Basin where there was one, not Atlantic Basin. In one of the sketches you can see the grain terminal which stands to this day, east of Columbia Street.

Would the author of this great article happen to know the exact apartments Lovecraft lived in at these addresses? Thanks! ~~Anthony

The picture of HP Lovecraft is actually taken from the vantage point of his apartment (building), and looks across the corner to 184 Clinton Street (over his right shoulder).

Over his left shoulder, is 182 Clinton Street, the home of Bill W. and where he wrote the 12 Steps.

A late correction — Sonia Greene moved to Cleveland for family and a traveling sales work job. She sent money and visited HP a couple days a month at the Clinton St apt for awhile, before they amicably divorced. She later moved to Los Angeles and remarried. She did not find out about HP’s death until years later and was upset to learn he never signed the divorce.

[…] While residing in Brooklyn, Lovecraft enjoyed roaming around the Big Apple in search of ideas and hobnobbing with other literary types in the Kalem Club. However, 1927’s “Horror at Red Hook,” a story set in the neighborhood and involving occult sacrifices, displayed his xenophobia. […]

Obviously, Sunny’s Bar was not yet in Red Hook. Otherwise, he would have loved the area.