One hundred years ago today, — aÂ horrifying disaster on Seventh Avenue endangered the lives of New Yorkers on their way to work.

Excavations for the new Seventh Avenue subway line (the IRT Broadway-Seventh Avenue line, aka the 1-2-3 trains) were proceeding well below an active thoroughfare. Â On the morning of September 22, 1915, two detonations inside the tunnel dislodged planking that was holding up the street between 24th and 25th Streets. Â Dangerously weakened, the temporary roadway folded into the earth, creating a chasm and swallowing up everything on the surface.

The men working below didn’t stand a chance, buried beneath a delugeÂ of automobiles and debris. Â Â Among the vehicles thrown into the 30-foot hole was a streetcar filled with passengers. “Heads and arms were thrust from the windows, and those who looked on helplessly could hear the cries of the ones caught in the wreckage.” [NY Sun, 9/23/15]

Both the water main and gas pipes burst openÂ inÂ the tumult, and trapped streetcar passengers panicked as the enclosure began filling with water.

“Witnesses of the accident quickly recovered from the shock of seeing nearly two blocks of city street sink from sight, carrying down all traffic within reach of the cave in.” [NY World, 9/22/15 late edition] 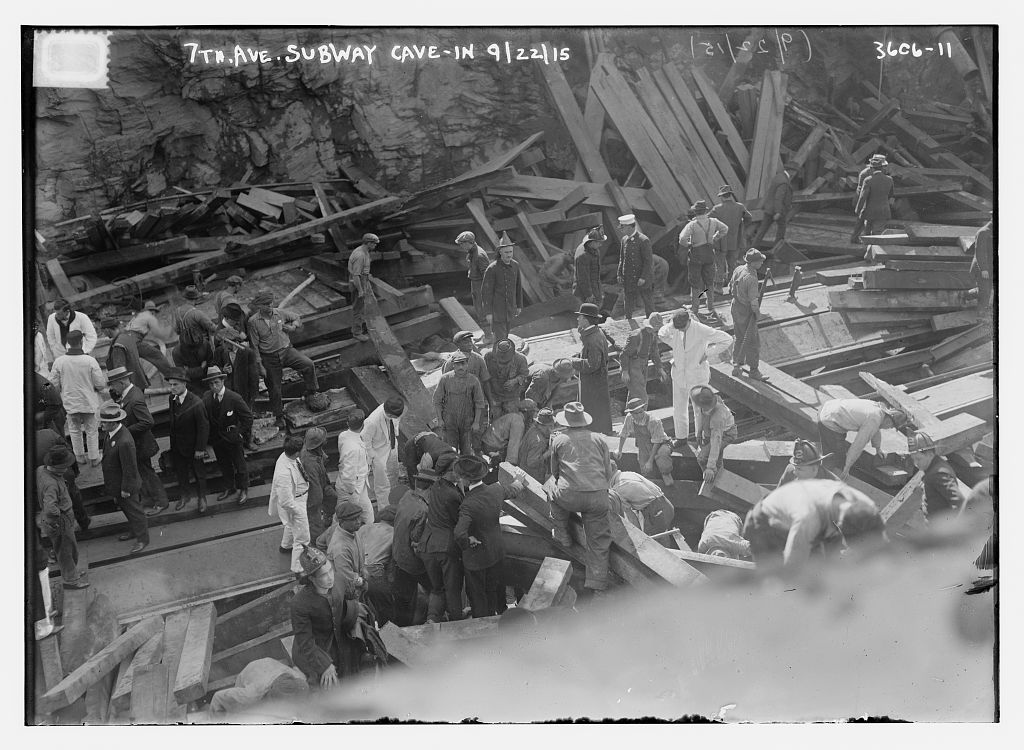 Seven people were killed in the disaster with dozens injured. Most of the deaths were workers in the tunnel although two passengers in the streetcar also died.

Eyewitnesses describe a scene of utter chaos and total confusion. Â A man named Joseph Urban was standing on the street and got pulled into the hole. Â “There was a funny feeling on the planking — a trembling, jerking sort of sensation — and then the whole street seemed to slide down into the hole. There was so much dust that I couldn’t see anything for two minutes. When I could see I appeared to be in a forest of tangled timbers, pointing every which way.” [source]

Police went searching for the culprit. Although it was later deemed an accident,Â an intentional detonation could not be ruled out especially given the fact that terrorist bombs were going off all over the city. (Back in March, detectives thwarted a second attempt to bomb St. Patrick’s Cathedral.)

Below: Seventh Avenue as it looked 100 years ago 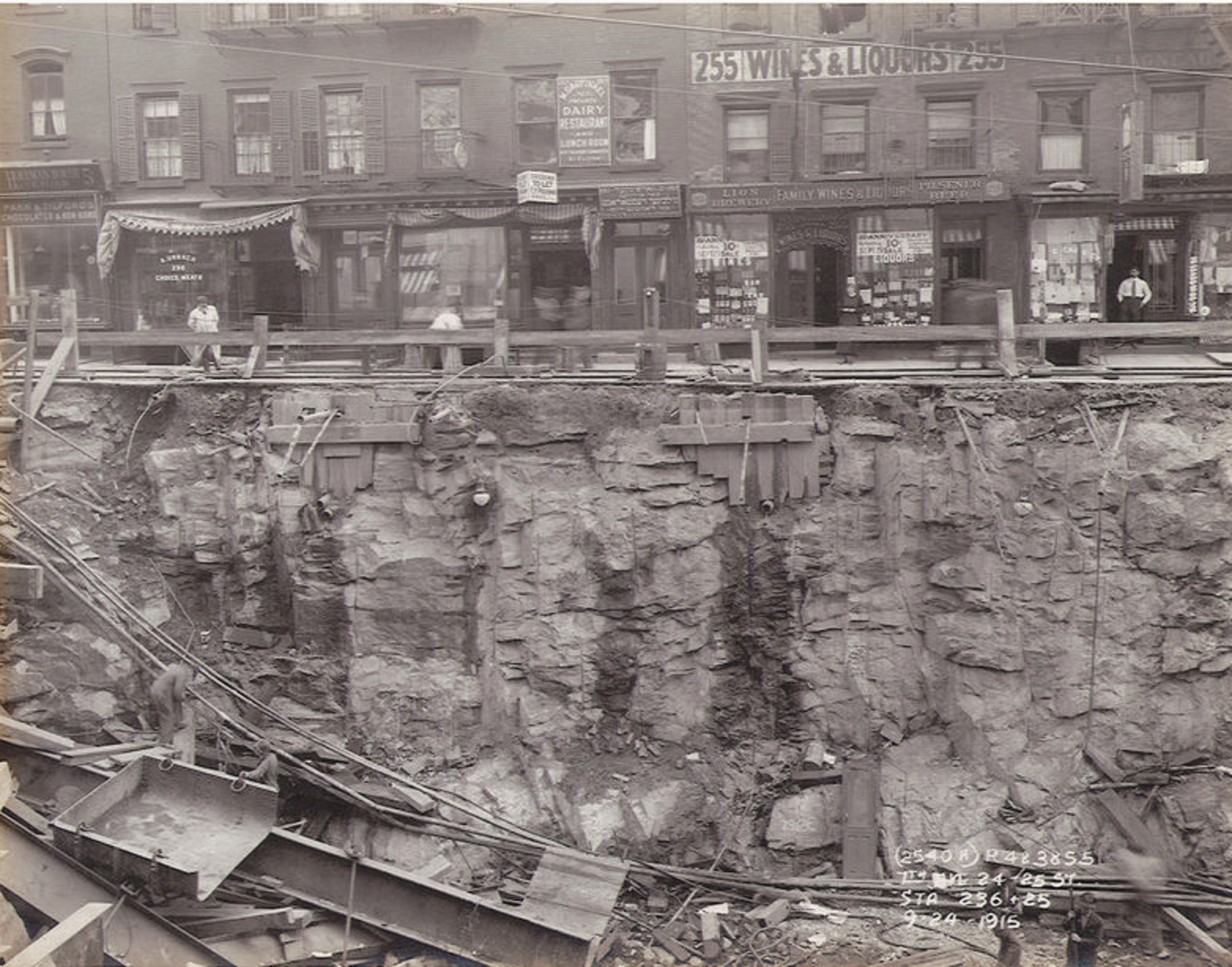 This wasn’t the city merely beingÂ over anxious. In fact, just three days later, another excavation collapsed at Broadway and 38th Street, swallowing a taxicab and killing its passenger. Â What makes this especially hazardous was its proximity to the popularÂ Knickerbocker and Casino theaters.

As you might imagine, the collapse snarled street traffic for weeks with street closures and detoured routes turning the Tenderloin and Herald Square districts into a mass of congestion.

Below: An illustration from the New York Sun, showing the location of the 24th Street street collapse and a Google Maps screen capture of this street today. 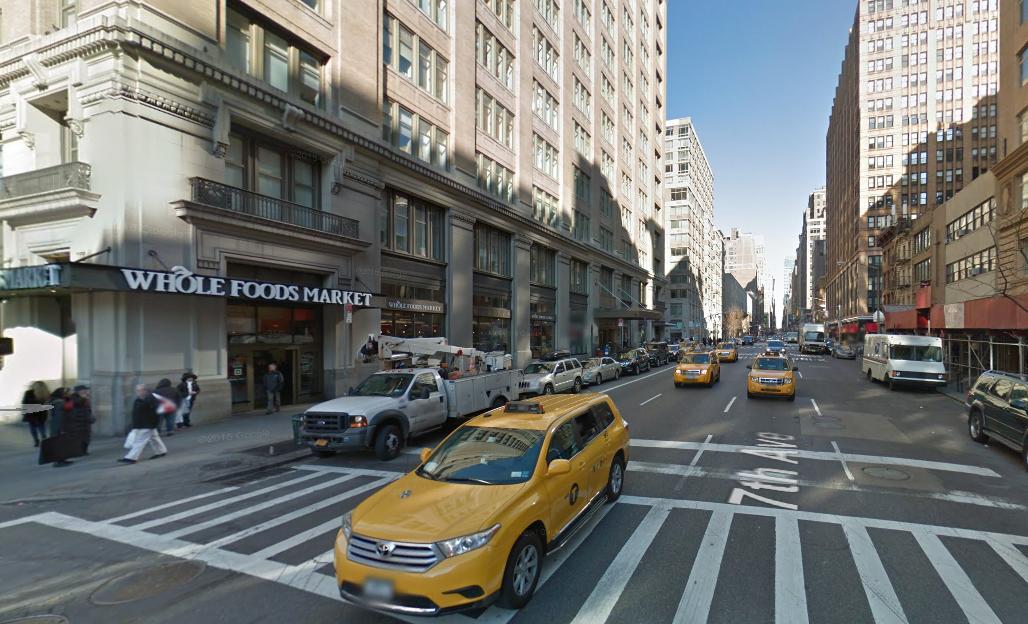