Pope Francis arrives in New York City today — part of his first-ever trip to the United States — and the city is rolling out the red carpet. In fact, all available carpets are being rolled out and even some throw rugs.

New York loves Popes. (Not always of course.) Only the Marquis de Lafayette and the Beatles have been treated to more rapturous displays of welcome by New York City residents. The city has been host to fourÂ previous papal visits, and in each case, Saint Patrick’s Cathedral has naturally been the manic center of activity. In fact three suchÂ visits have been immortalized on plaques in front of the cathedral.

ButÂ with each trip, the pope in question managed to find a couple other unique corners of the city to visit as well.

Perhaps the strangest visit of all was the very first — Pope Paul VI, the controversial leader who presided over the Second Vatican Council and made a name for himself traveling all over the world. Finally in an era whereÂ a man could be both pope and jetsetter, Pope Paul arrived in New York in October of 1965 and promptly went to visit his old roommate, who was performing in a fair.

That roommate would be Michelangelo’s Pieta, on loan from St. Peter’s hallways to the Vatican pavilion at the 1964-65 World’s Fair.

The Pope visited the Fair on October 4, 1965, on a busy day that also included mass at Yankee Stadium (the first papal mass ever in the United States), an address to the United Nations, and a meeting in the city with president Lyndon Johnson at the Waldorf-Astoria.

Many will remember the thousands of people who greeted the Pope in the original Pope-mobile (“a closed, bubble-top limousine”) during its 25-mile processionÂ through the city. Here’s a fact to delight your friends and neighbors — the first American bridge ever crossed by a Pope in all of history was the Queensboro Bridge.

Today a rounded bench, or exedra, sits in Flushing Meadows park honoring the moment Pope Paul visited the Pavilion. (It seems that whenever a Pope hovers in a place for more than a few minutes, a plaque or monument springs up in its place.)

By the way, I found this extraordinary page full of great photos about that firstÂ Pope-mobile.

But it’s Pope John Paul who’s the real New York favorite; he held the papal throneÂ for so long that he managed two trips to Gotham City — in 1979 and 1995.

His October 1979 trip was like a rock concert tour, also swinging through Philadelphia, Boston, D.C., Chicago and Des Moines. Part of the enthusiasm was because John Paul, at 58 years old, had just been appointed the year before.

In 1969, as a cardinal, he had held mass at Yankee Stadium, so by the time he did it again on October 2, 1979 — as the Pope — he was as much a fixture as Reggie Jackson. Rain greeted over 9,000 cheering worshippers — or fans — and, according to legend, when the Pope mounted the ballfield to address the crowd, the rain showers stopped. And as a blessing for Mets fans, the next day the Pope also held rapt an audience of 52,000 at Shea Stadium.

Below: the Pope at Yankee Stadium

But like all rock stars, the Pope couldn’t complete his New York odyssey without a performance at Madison Square Garden. Although John Paul also addressed the U.N. and a Saint Patrick’s audience during that trip, he’s best remembered by many for his inspirational address on October 3rd to 19,000 city children.

Saint Patrick’s honored his Holiness’s visit in 1979 by installing a bust. But he would be back. On almost exactly the same day, sixteen years later.

Length of his visit:Â Almost 48 hours

New York City in 1995 was a vastly different city and John Paul returned for a longer visit — four days in total in the entire New York area — on October 4th. This time, instead of just delivering messages to the clergy gathered at Saint Patrick’s, he spontaneously decided he wanted to walk around the block. And why not? You’ve got shopping, Saks, street vendors selling Pope souvenirs!

Below: In the Pope-mobile, riding by Saks Fifth Avenue

The Pope also finished off his collection of performing in gigantic venues for mass — holding court in Giants Stadium, the Aquaduct Racetrack in Ozone Park and eventually to 100,000 people on the great lawn in Central Park.

From there, the elderly leader of the Catholic Church gave the city the ultimate shout-out: “This is New York! The great New York! This is Central Park. The beautiful surroundings of Central Park invite us to reflect on a more sublime beauty: the beauty of every human being, made in the image and likeness of God. Then you can tell the whole world that you gave the pope his Christmas present in October, in New York, in Central Park.”

Length of his visit:Â Almost four days! He couldn’t get enough.

Pope Benedict XVI came to New York for three days, two nights (April 18-20), arriving in Manhattan on a military helicopter and breakingÂ the apparently holy tradition of visiting New York in the early Fall. Â (Still would have needed aÂ light sweater or vestment.) Â But Benedict, as the cardinal formerly known as Joseph Ratzinger, actually visited the city in that lesser role in 1988, where apparently he was met with protest from gay activists and shunned by some prominent Jewish leaders.

Below: The Pope viewing the World Trade Center site

Pope Francis’ exhausting itinerary can be found here. Â He’ll make stops first for evening prayer at Saint Patrick’s Cathedral, then to the residence of the Apostolic nuncio at the United Nations to sleep. Â He speaks to the U.N. Assembly in the morning, then down to the National September 11 Memorial & Museum by lunchtime.

Perhaps the most intriguing stop will come in the afternoon, meeting with students from Our Lady Queen of Angels School in East Harlem. Whereas the first Pope to come New York fifty years rode through East Harlem in his covered Pope-mobile, Pope Francis will chat withÂ a third-grade class filled with children who will have quite a story to tell their grandkids.

Afterwards he will travel through Central Park and arrive at Madison Square Garden for Mass.Â At rush hour! Oh right, all the streets are closed. In fact, Fifth Avenue right now is contained in a large fence, easily the tightest security I’ve ever seen here. 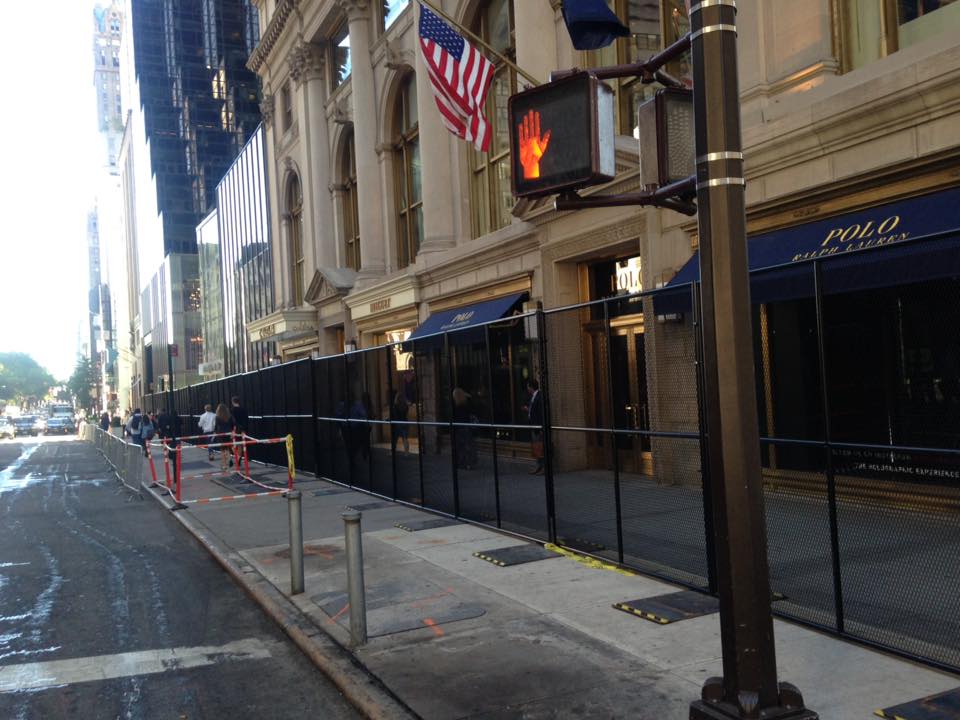 But Pope FrancisÂ is a man of many surprises. Could he decide that he wants to walk the High Line? And how can he visit New York and not even visit Brooklyn? Is the Pope a Girls fan?

This is a heavily revised version of an article that originally ran in 2008 when Pope Benedict visited New York City.