A thousand unsolved mysteries live within a newspaper’s archives, little forgotten events that have faded into history. Sometimes you can search deeper, and the answers to those mysteries may emerge.

This is what happened in a series of three articles I found the other day while doing some research on North Brother Island (the fruits of which will be revealed in tomorrow’s new podcast!)

I present to you the three complete clippings as they provide a tragic tale told in a methodicalÂ manner. I have been able to find no further information about the central figure other than these three articles.

But first — Some context on North Brother Island, that little area of land (with its companion South Brother Island) between the Bronx and Riker’s Island. Â The island was uninhabited until 1869 when a lighthouse was built hereÂ to help navigate the traffic of the East River and Long Island Sound past the treacherous waters known as Hell’s Gate.

According to the book Lost Lighthouses, “The square, wooden residence contained a kitchen, pantry, dining room and sitting room as well as four bedrooms and an oil storage area. Â The 50-foot tower rose from the front of the building and was equipped with a fourth-order Fresnel lens.”

The lonely lighthouse would soon beÂ joined by a hospital specializing in smallpox and other serious diseases. It was to become, in essence, a quarantine station, operated by Riverside Hospital. “The reconstructed smallpox pavilion, on North Brother Island, is ready to receive about forty patients,” reported the New York TribuneÂ inÂ February 1881.

That August, asÂ city officials visited the island to plan the construction, the Tribune reported on its present occupants. “[North Brother Island] has a surface area of about of about thirteen acres. It is at present occupied only by a lighthouse-keeper and his assistant, and by a woman who entertains occasional picnic parties.”

Flash forward to the cold winter of 1884 — January 2, 1884, in fact. The picnic woman was undoubtedly gone, and the hospital pavilions were newly completed. Administrators and patients may Â have just moved in by this time. Â We do know, however, that the lighthouse operator was at his helm — a man named Robert Parker. I’ll let the news clippings now take over: 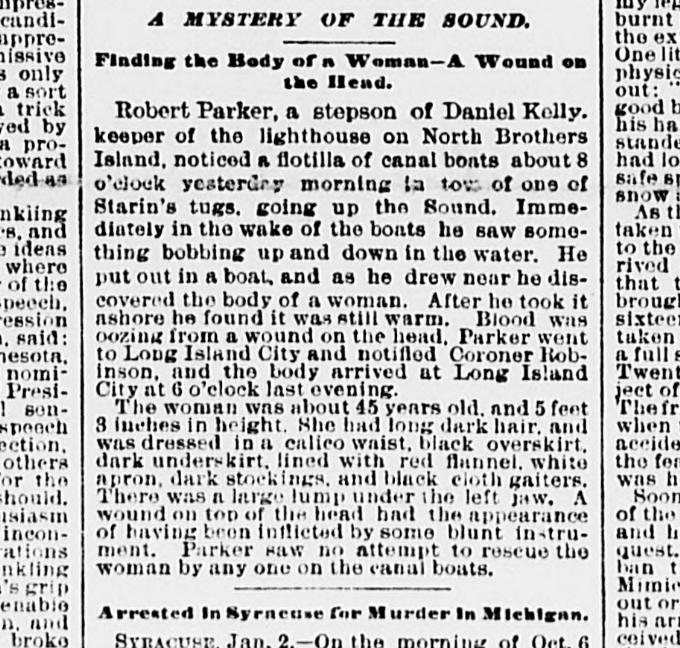 A MYSTERY OF THE SOUND

Finding the Body of a Woman — A Wound on the Head

“Robert Parker, a stepson of Daniel Kelly*, keeper of the lighthouse on North Brother Island, noticed a flotilla of canal boats about 8 o’clock yesterday morning in tow of one of Starin’s tugs**, going up the Sound. Â Immediately in the wake of the boats he saw something bobbing up and down in the water. Â He put out in a boat, and as he drew near he discovered the body of a woman. Â After he took it ashore he found it was still warm. Â Blood was oozing from a wound on the head. Â Parker went to Long Island City*** and notified Coroner Robinson, and the body arrived at Long Island City at 6 o’clock last evening.

The woman was about 45 years old, and 5 feet 3 inches in height. She had long dark hair, and was dressed in a calico waist, black overskirt, dark underskirt, lined with red flannel, white apron, dark stockings, and black cloth gaiters. Â There was a large lump under her left jaw. Â A wound on top of the head had the appearance of having been inflicted by some blunt instrument. Â Parker saw no attempt to rescure the woman by any one on the canal boats.”

*Not sure who this Daniel Kelly is. Any guesses?

**The tug boat concernÂ of John Henry Starin, a “leading marine operator in the United States,” owning everything from excursion boats to industrial barges. (Pictured above)

An article in the New York Times from the same day repeats most of the sameÂ information — including that thing about Daniel Kelly — but brings up the opinion of the coroner: 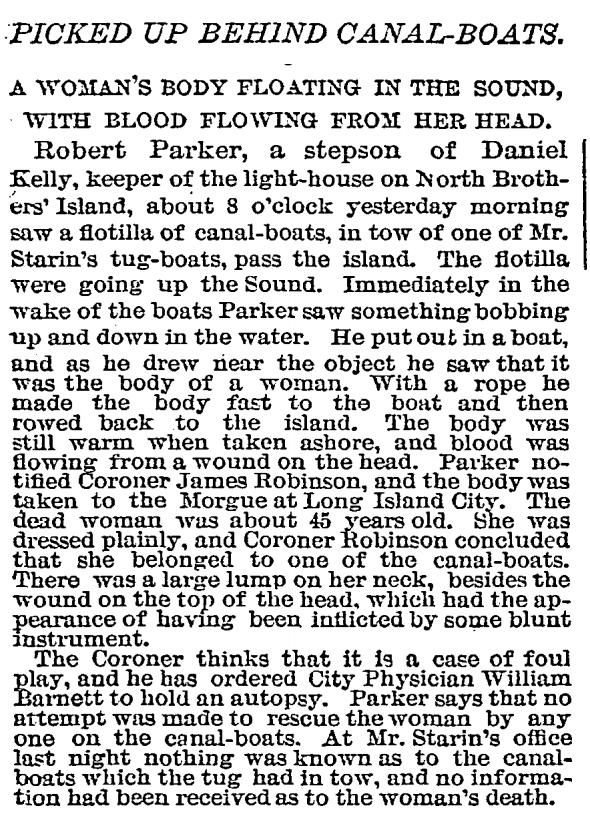 “The Coroner thinksÂ that it is a case of foul play, and he has ordered City Physician William Barnett to hold an autopsy. Â Parker says that no attempt was made to rescue the woman by any one of the canal-boats. Â At Mr. Starin’s office last night nothing was known as to the canal-boats which the tug had in tow, and no information had been received as to the woman’s death.”

The StoryÂ of Matilda

By the following day, the woman had been identified. Here is an excerpt from the article. (You can find the original here.) The entirety of the text is below. 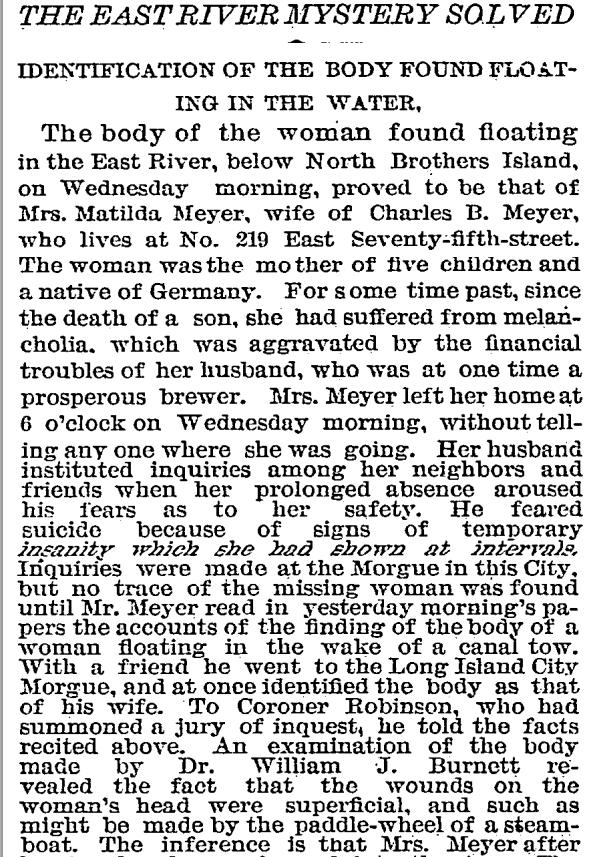 IDENTIFICATION OF THE BODY FOUND FLOATING IN THE WATER

“The body of a woman found floating in the East River, below North Brothers Island, on Wednesday morning, proved to be that of Mrs. Matilda Meyer, wife of Charles B. Meyer, who lives at No. 219 East 75th Street.*

The woman was a mother of five children and a native of Germany.Â  For some time past, since the death of a son, she had suffered from melancholia, which was Â aggravated by the financial troubles of her husband, who was at one time a prosperous brewer.

Mrs. Meyer left her home at 6 oâ€™clock on Wednesday morning, without telling anyone where she was going.

Her husband instituted inquiries among her neighbors and friends when her prolonged absence aroused his fears as to her safety. He feared suicide because of signs of temporary insanity which she had shown at intervals.Â  Inquiries were made at the Morgue in this City., but no trace of the missing woman was found until Mr. Meyer read in yesterday morningâ€™s papers the accounts of the finding of the body of a woman floating in the wake of a canal tow.

With a friend he went to the Long Island City Morgue, and at once identified the body as that of his wife.Â  To Coroner Robinson, who had summoned a jury of inquest, he told the facts recited above.

An examination of the body made by Dr. William J. Burnett revealed the fact that the wounds on the womanâ€™s head were superficial and such as might be made by the paddle-wheel of a steamboat.Â  The inference is that Mrs. Meyer after leaving her home plunged into the river.Â  The tide was running at the flood, and was about full flood when she was discovered.

Her clothing had served to buoy her up, and so she had floated out to the point where she was discovered by Robert Parker.”

*The building at that address is no longer there.

While the story deems the ‘mystery solved’, to me it opens so many more. Did Matilda really kill herself? What were the circumstances surround her husband’s failed financial fortunes, and those of her son’s death? What of the fate of the other children?

Unfortunately,Â the answer of these mysteries from the tragic tale of Matilda Meyers may forever be unanswered.

3 replies on “The Mystery on North Brother Island: A story told in news clippings”

The way I read the articles, Daniel Kelly is the lighthouse keeper and Robert Parker is his stepson.

Yes I read it the same way that Daniel Kelly was the keeper and Robert Parker was his stepson. I found Daniel Kelly listed as the Head Lighthouse Keeper from 1871-1890 on this website. http://www.lighthousefriends.com/light.asp?ID=851

[…] friends, The Bowery Boys, have some resources that relate to Mary: North Brother Island, Castle Garden and Battery Park, and Irish […]