On Sunday The Bowery Boys join up with The Ensemblist to present a special cabaret event at 54 Below — a tribute to the great St. James Theatre!

Perhaps some of you may be asking — why do a live show about a individual theater?

The underlying theme of the film is that ‘serious’ theater was a reinvigorating, respectableÂ medium that could renew the career of Riggan Thomson (Keaton) whose Hollywood successes have diminished his credibility.

Below: Â The exterior and entrance of the St. James in character for Birdman. Â More images at Eric Helmin / Design + Media who worked on the film’s terrific graphicÂ design can be found at his website. He’s also worked on The Knick and Inside Llewyn DavisÂ so we’re clearly fans of his work.

The St. James was one of a handful of stages which estabishedÂ the supremacy of the American theater. To filmÂ Birdman here was toÂ set the bar near-impossibly high for the lead character. Â The history of the St. James runs parallel to Broadway’s own dramatic highs and lows. It was here that Hello Dolly!, Oklahoma, The King and I and The Producers all made their New York debuts.

Here’s a selection of other quirkyÂ facts about the St James Theatre, some big, some small, some weird:

1) The plot of land where the St. James Theater stands today — that’s 246 West 44th Street, between the Helen Hayes Theatre and John’s Pizzeria — Â was home to the first incarnation of Sardi’s Restaurant. Called the Little Restaurant (or Sardi’s Sidewalk Cafe), this first incarnation of the famous theatrical eatery opened in 1921. Â A frequent sight was that of proprietor Melchiore Pio Vincenzo Sardi Sr. standing in the doorway, flipping a twenty-dollar gold coin. Â In 1927, the restaurantÂ moved to itsÂ present location – just a couple doors down from the St. James.

Below: The outdoor garden at Sardi’s original spot 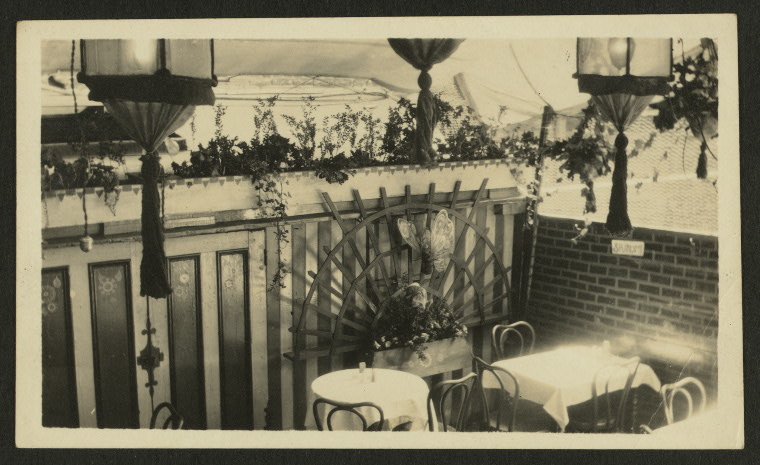 2) What does the St. James Theatre have in common with the Chelsea Piers and Grand Central Terminal? They were all designed by the same architectural firm Warren and Wetmore. But when it opened with its first show — a George M. Cohan romp called The Merry Malones — it was called Erlanger’s Theater, named for one half of the theatrical production juggernaut of the 1920s — Klaw & Erlanger. (By the way, there was alsoÂ a Klaw Theatre just a block away.)

Below: Anthony Dumas sketches from 1932 of the Erlanger Theatre and the Little Theatre (later the Helen Hayes). Later that year the name would switch to the St. James in tribute to a famous London theater of that same name.

3) In 1943Â the Rodgers and Hammerstein musical Oklahoma made its debut here, changing the face of musical theater forever. But, many years before, the St. James very nearly celebratedÂ the debut of another major epoch-makingÂ musical– Showboat. It was even considered for the inaugural performanceÂ at the St. James! HoweverÂ its producer Florenz Ziegfeld wasn’t ready in time, and it eventually debuted at Ziegfeld’s own theater onÂ December 27, 1927.

Below: A dance-filled play presented by the Federal Theatre Project called Trojan Incident played for a limited run in 1938

4) The St. James was a vital component of the so-called ‘Golden Age of Broadway’, delivering debut musicals such as Pal Joey, Where’s Charley?, The King and I and The Pajama Game. Countless successful Shakespeare and Gilbert & Sullivan productionsÂ graced the stage as did original ballets and even the first play production of Richard Wright’s Native Son in 1941.

So the place has gotta be loaded, right? During the run of Oklahoma, burglars broke into the St. James to steal the evening’s hefty receipts, only to be foiled when they were unable to open the main safe. “They escaped with a small amount of change,” said the Times.

5) In 1958, the theater went through a massive renovation, almost a rebuilding really. Â Most of the interior was replaced with modern theatrical amenities like a state-of-the-art sound system and air conditioning unit. Â The lighting equipment was now “completely enclosed in Plexiglass” and “the asbestos curtain has a mural-like design on it.” [source]

7) A lot of shows celebrating New York City history have played at the St. James, andÂ in Â 1980 Â came a tribute to the city’s greatest showman — P. T. Barnum. The musical Barnum, with music byÂ Cy Coleman, featured the subjects ofÂ real-life Barnum spectaclesÂ like Joice Heth, Jenny Lind and Tom Thumb. Â Barnum died in 1891, many years before any theater would have made an appearance above 42nd Street.

Below: Jim Dale in Barnum 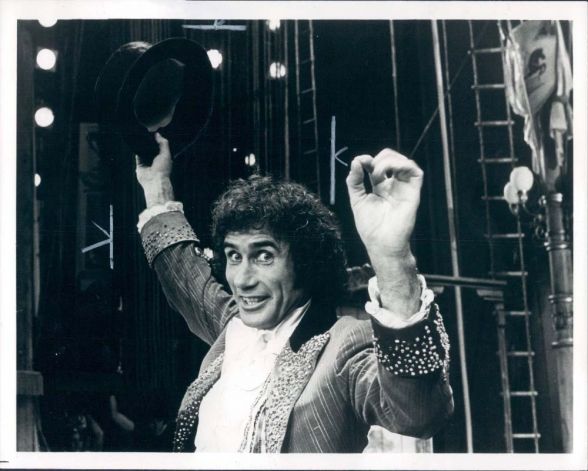 8)Â In 2005 an extraordinary feedback loop occurred at the St James Theatre when the musical movieÂ version of The Producers (itself based on a non-musical film) was filmed at the St. James on the very set of the Broadway theater version. Â Said one of the extras from the film, standing on stage that day Â “Basically, I’m supposed to applaud the play-within-the-play in a movie about a play that was based on a movie,” [source]

9) The past ten years at the St. James have been rewarding indeed — with musical versions of rock albums (American Idiot), children’s books (How The Grinch Stole Christmas), Woody Allen movies (Bullets Over Broadway), and even one Shakespearean comic farce (the current Something Rotten!)

A few lucky individuals even got to see Barry Manilow here in a one-man concert show in 2013. From one review: Â “The 1-hour-50-minute concert, performed without an intermission, revealed Mr. Manilowâ€™s brand to be intact. That brand might be described as musical chicken soup for the soul.”

10) With Birdman‘sÂ bigÂ win at the 2015 Academy Awards, the St. James Theatre becomes the second Broadway theater prominently featured in a Best Picture winner. Â  All About Eve, Best Picture winner in 1951, features scenes from the John Golden Theatre on West 45th Street. Â The Great ZiegfeldÂ also won Best Picture (in 1937) but it was all filmed in Hollywood.

Wanna know more about the history of the St. James Theatre with an overview of Times Square and Broadway history — all while festively dining and drinking in a superb cabaret setting? Come to our show this Sunday!

Tickets are still available for our two shows at 7pm and 9:30pm.Â

To get your tickets, please visit the 54 Below site hereÂ or click on the links below

The good folks over at the Broadway musical Something Rotten! are kindly offering a discount code for tickets. 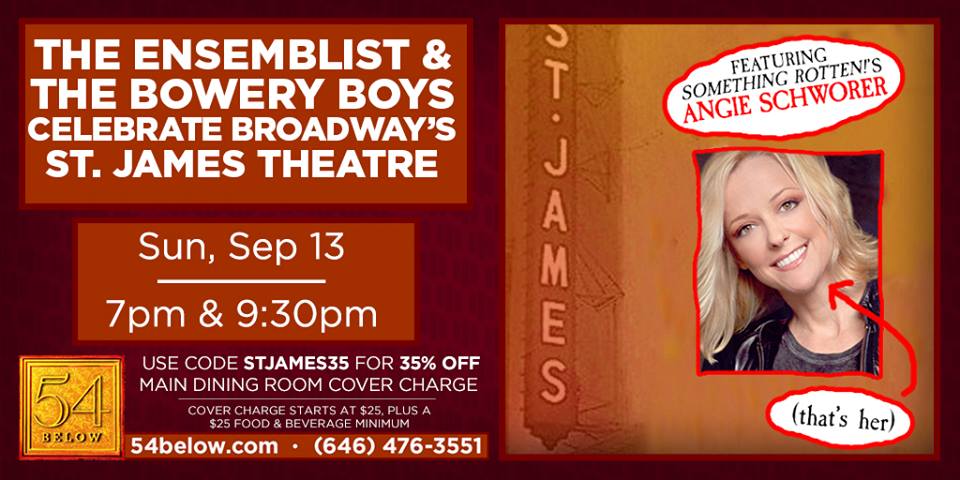