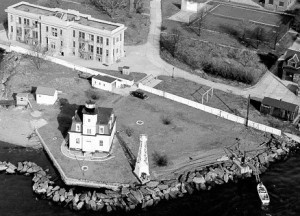 Above: North Brother island and its lighthouse

The Brother Islands, two almost forgotten islands in the channel between Queens and the Bronx, have finally gotten some respect. Over the years North Brother, the big brother, has been used for a host of unusual purpose, home to the wounded, the drug addicted and the diseased. South, the smaller one, has been virtually unused. They are today a unique example of an area of New York completely giving itself back to nature.

Most East River islands have always had a spotty history of decrepit uses by the mainlanders. Ellis Island took the throngs of millions of immigrants after the city pushed them out of Castle Garden. Rikers was a Civil War training camp before being turned into a penal colony. Staten Island was the city’s garbage dump. And don’t even get me started about Roosevelt Island — sanitariums, prisons, poorhouses.

But at least Roosevelt have Al Lewis. The Brothers’ defining personality is Typhoid Mary.

North Brother was mostly natural growth until 1885 when Riverside Hospital moved its smallpox quarantine here from Roosevelt (then Blackwell’s Island). It was a perfect location, away from the other hospitals and institutions on overcrowded Blackwells, and soon any disease in need of quarantine was soon sent there. Its isolation made it a forlorn place for patients and nurses alike, its only views an uninhabited Bronx shore and smoke from Rikers’ burning trash heaps.

North Brother became of crux of two early century headline-grabbing tragedies. In 1904 the General Slocum steamship, which exploded in the waters of the East River, scuttled on North Brother, with many of the over 1,200 who died washing up on the small island’s shore. The notorious Typhoid Mary, an immigrant woman who unbeknown to her spread disease to dozens of people, was sequestered here twice and died here.

South Brother Isand fare a little better, only because it was too small to do much of anything with. (South is seven acres, North thirteen.) Curiously, its most famous owner also owned the New York Yankees and a popular brand of beer — Jacob Ruppert. He kept what must have been a lovely summer home there, until it burned down in 1909. Again, the 1900s, not a good decade to be a New York island…

North became a dormitory for war veterans, then a rehabilitation center for drug users in the 1950s. Then, nothing. North Brother was basically abandoned, its famous old hospital now overtaken by natural growth. South meanwhile never had much of anything on it since Ruppert left. The city now owned it but, in a perfect example of what it really thought of the place, sold it to a gravel company for a whopping $10 in the 1970s.

South remained one of the last privately owned islands in the New York metro area until 2007, when the city bought it back, for the slightly more expensive cost of $2 million. Now South and its older Brother are undisturbed homes for swans, egrets, seagulls and cormorants and are without a doubt two of the most peaceful places anywhere near Laguardia Airport.

This site gives a wonderful tour of North Brother’s abandoned buildings, as of course does Forgotten New York. 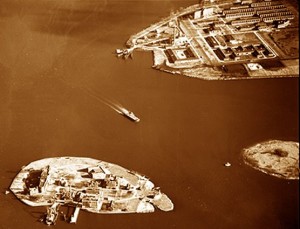