There are a great many statues in New York City of the Italian explorer Christopher Columbus,Â a rather controversial figure today who manyÂ consider to beÂ a sadistÂ and a bumbling idiotÂ who destroyed indigenous cultures in the name of European glory.Â Â He was obviously more celebrated at the end of the 19th century when colonization and violent conquest were still on the menu of empire expansion.

In many ways, Columbus’Â iconography has becomeÂ removed from his legacy.Â Some of New York’s ColumbusÂ representations — including the most prominent one in Columbus Circle — arrived in 1892, the year New Yorkers celebrated the 400th anniversary of Christopher Columbus’ ‘discovery’ of the New WorldÂ with a variety of commemorative events. Given that this was the Gilded Age, this required all manner of sculptural representation laced with symbolic meaning.

Below: Columbus Circle in 1905

More importantly, the ceremonies marked a unique time in this country’s history with the increased prominence of new Italian immigrants. Italians were arriving in America at a rapid rate starting in the 1880s and increasing well into the new century. Â Today, the idea of Columbus as a proud representation of European conquest has diminished, but his stature as a iconÂ of Italian pride remains. In fact the Columbus statue at the heart of Columbus Circle was funded entirely by Italian Americans — or, at least, readers of the Italian American newspaper Il Progresso.

The largest was plannedÂ in the “big circle” at the southwest gate of Central Park, featuring a great column and a granite depiction of Columbus by Gaetano Russo, entirely created in his studio in Rome and shipped over in August.

The statue was in a competition of sorts withÂ a Spanish-American tribute to Columbus, a massive fountain to be designed by Fernando Miranda. But there was no room for Miranda’s 100-foot-wide fountainÂ by the time Columbus and his column were erected onÂ October 12, 1892.

It’s interesting to compare the two southern corners of Central Park and how they were perceived. Â The southeast side ran along Fifth Avenue — lined with mansions — and was essentially a carriage entranceÂ for the wealthy. The southwest side was used by the residents of the Tenderloin and Hell’s Kitchen although sumptuous new apartment buildings were going up along Central Park’s west side. Â Thus it might have been considered a more ‘democratic’ entrance. Â  Many years later, the Columbus column would be joined by the Maine monument.

Below: Â How the area looked around the circle when Columbus was first installed in 1892 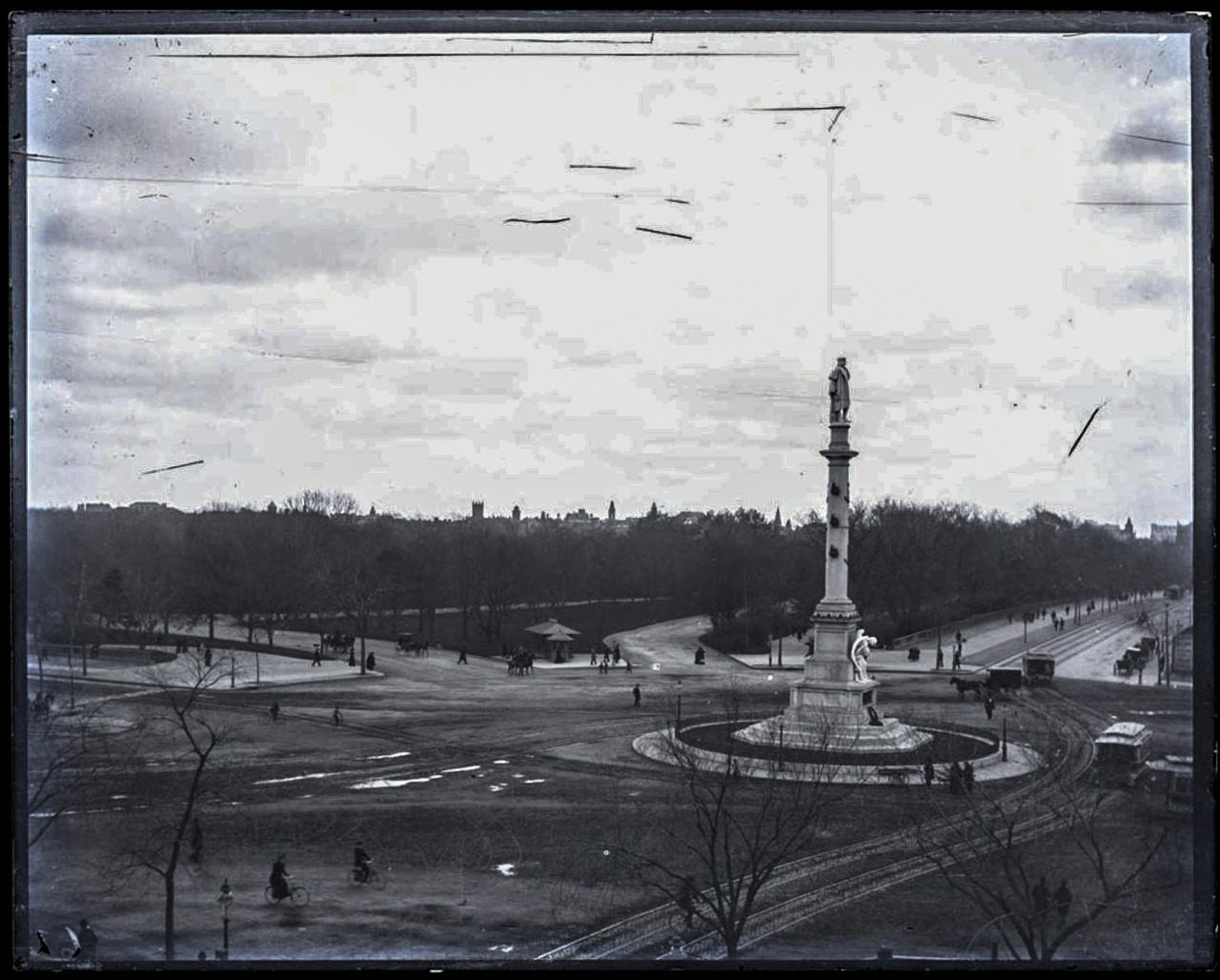 Christopher Columbus’ journey — his statue’s journey, that is — was closely followed by the press. Â “A ship belonging to the Italian Navy is now on the Atlantic Ocean headed for this port with a beautiful and nobel gift for this city,” according the New York Tribune on August 21, 1892.

The Statue of Liberty, a gift from France, had only been dedicated in 1886, and some saw parallel in the two foreign presents. Â “From the time the movement was first started to the present time it has been forwarded enthusiastically by Italians of all conditions and circumstances, not only in this city, but also in Italy.”

Some prominent guests arrived from the official unveiling on October 12, 1892, including the Vice President of the United StatesÂ Levi P. Morton, the Archbishop of New York Michael Corrigan, and the mayors of both New York and Brooklyn.

Whatever happened to Miranda’s Columbus fountain?Â Other homes were sought forÂ the creationÂ but none were found, so the project wasn’t installed in any public plaza.Â Fountains would eventually join the Columbus Circle column but not for several decades. In 2005 a dramatic new fountain was installed at the column’s base, recalling the water features of Rome.

Meanwhile a statue to Columbus was also planned for Central Park. Originally slated to stand next to William Shakespeare’s statue, park commissioners soon thought otherwise, objecting “to having too many memorials of Columbus in and about Central Park,” according to the Times. They changed their minds, and Jeronimo Sunol’s statue of Columbus was finally placed here on May 12, 1894.

You can spend the day looking for Columbus all over New York City! Here’s a list of places you can find Columbus inÂ at least four of the five boroughs.