Holiday traditions in Manhattan are of course known the world over, from the glowing light displays of Park Avenue to the Rockefeller Center Christmas tree. But they lack a certainÂ human touch, spun from wealthy corporations and honored tradition.

In the past two decades, theÂ extravaganza has energized a normally quiet neighborhood few in New York know much about. For most of its history, Dyker Heights was virtually uninhabited, either by humans or two-story illuminated snowmen.

Below is a history of the Â Dyker Heights neighborhood, interspersed with pictures I took of this year’s Christmas lights celebration: 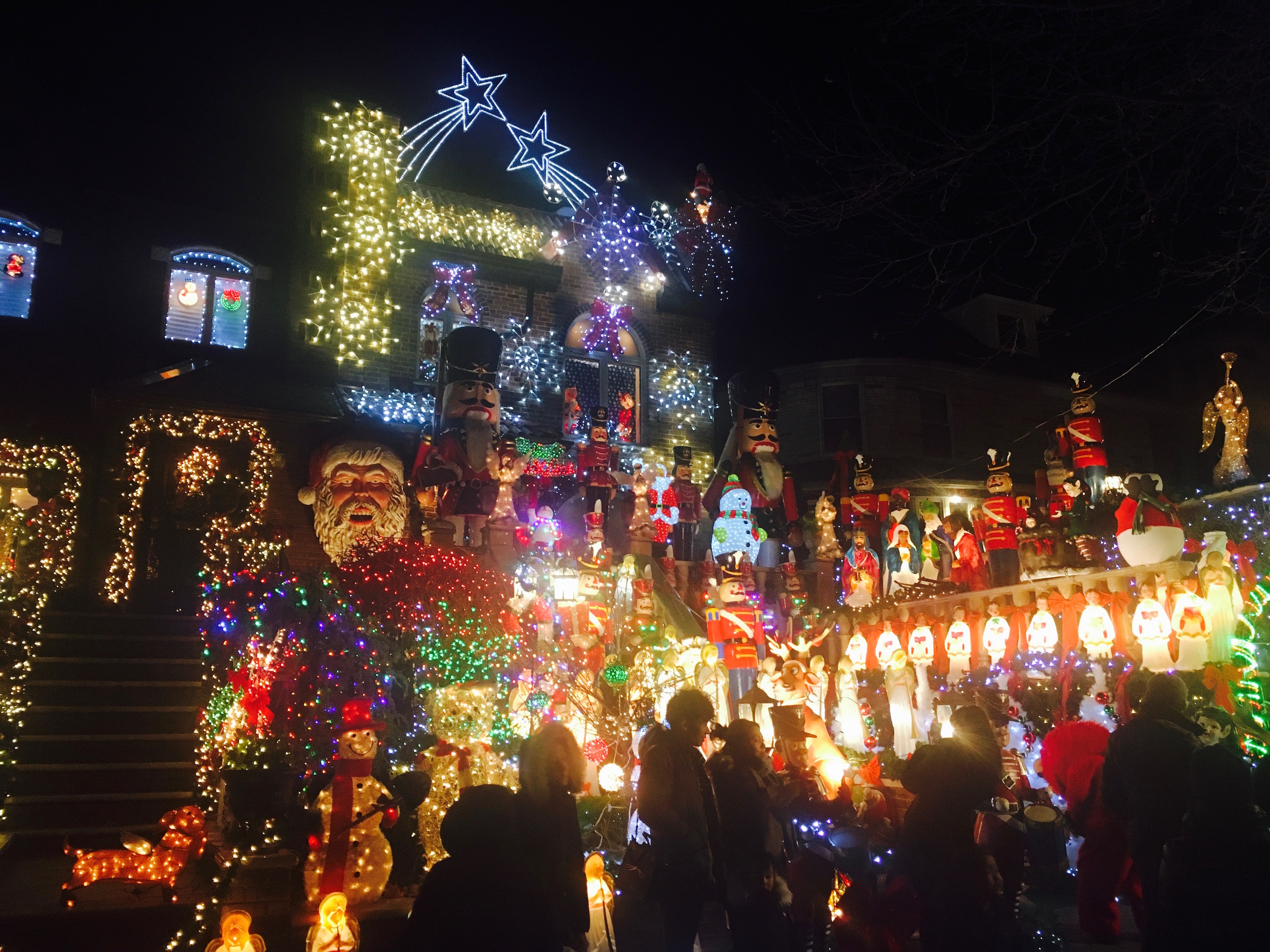 Dyker Heights is named for an uninteruppted, sloping meadow which rolled down to the waters edge (today interuppted by the rushing traffic of Shore Parkway). Nobodyâ€™s certain where Dyker Meadow got its name, only that it originated from the days of Dutch occupation, either from a Van Dyke family which settled here, or, more generally, from actual dykes the family built to drain the meadow.

Tumuluous history springs up on either side of Dyker meadow and its small forests, as the British who land at nearby Denyce Wharf begin their invasion of Brooklyn in 1776, taking up battle with the Continental Army to the north and east. As part of the township of New Utrecht, the meadow was unsuitable for farming, but its forests were plenty suitable for firewood and materials for building homes.

For awhile, there was only a single dwelling here, atop a hill known as the Lookout, built by civil engineerÂ RenÃ© Edward De Russy.

Below: Not the home ofÂ RenÃ© Edward De Russy 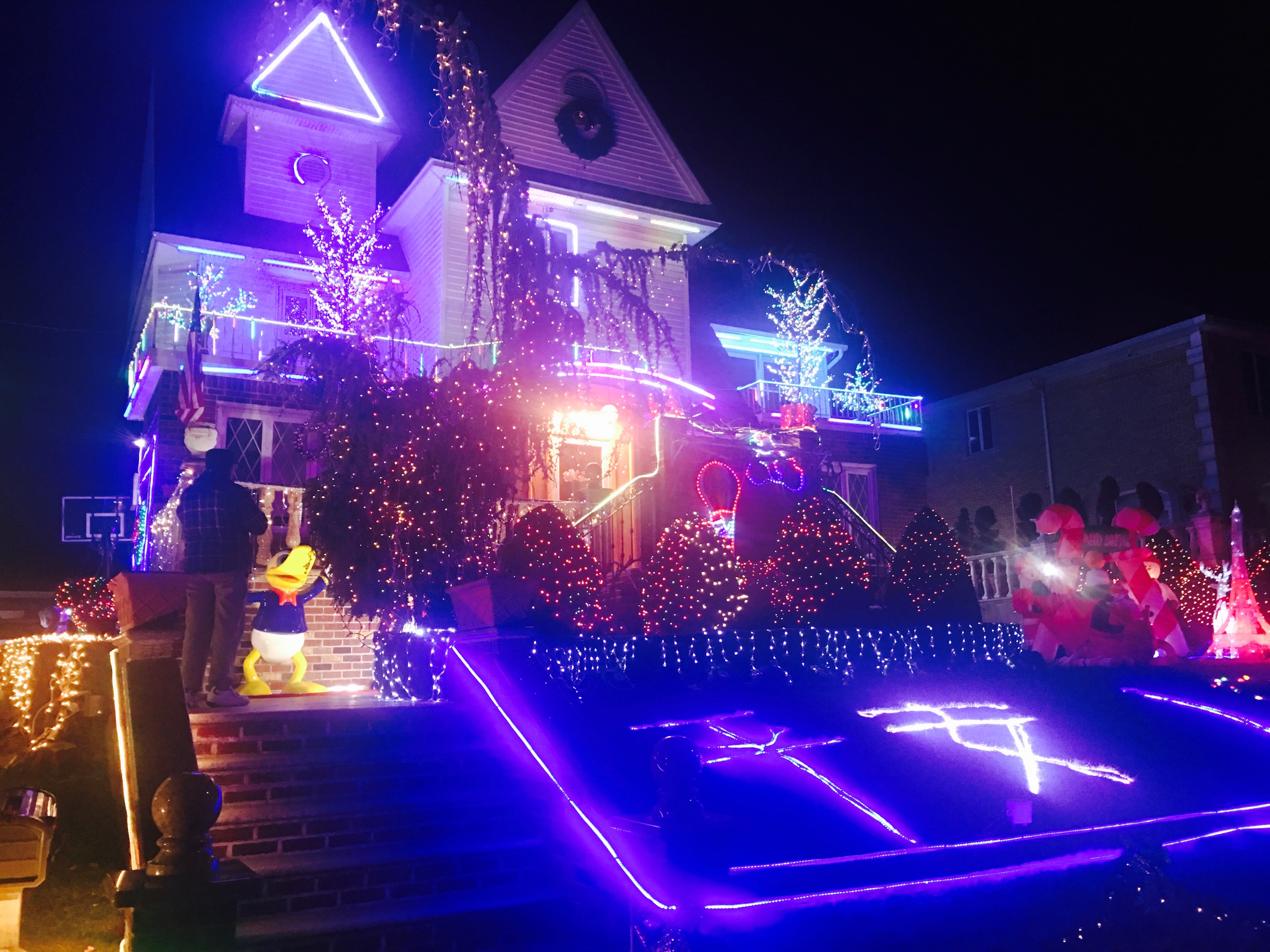 Development finally came to the area shortly before Brooklyn consolidated with New York. During the 1890s, the nearby area of Bath Beach was quickly becoming a resort getaway similar to Coney Island. Called Bensonhurst-by-the-Sea, the resort adhered to strict moral entertainments (i.e. no booze) and thus was destined to fail.

Luckily, by then, an elevated West End train line (the Brooklyn, Bath and Coney IslandÂ line) was attracting speculators eager to draw New Yorkers with residences built on old farmlands. By the late 19th century, the New York Times excitedlyÂ noted the saavy practicesÂ of land developers in this region of South Brooklyn.

The father of Dyker Heights is developer Walter L. Johnson, who in the 1890s scooped up the land, brought roads and utilities to this fairly remote part of Brooklyn, and quickly created a small community. He even named the area, the â€˜Heightsâ€™ assumably tacked on to embue it was a cache similar to Brooklyn Heights. Johnsonâ€™s gamble paid off; in 1899, the Wall Street Journal proclaimed, â€œnowhere else in the consolidated city is there anything to compare it with. From here can be seen a marine panorama hard to beat.â€ 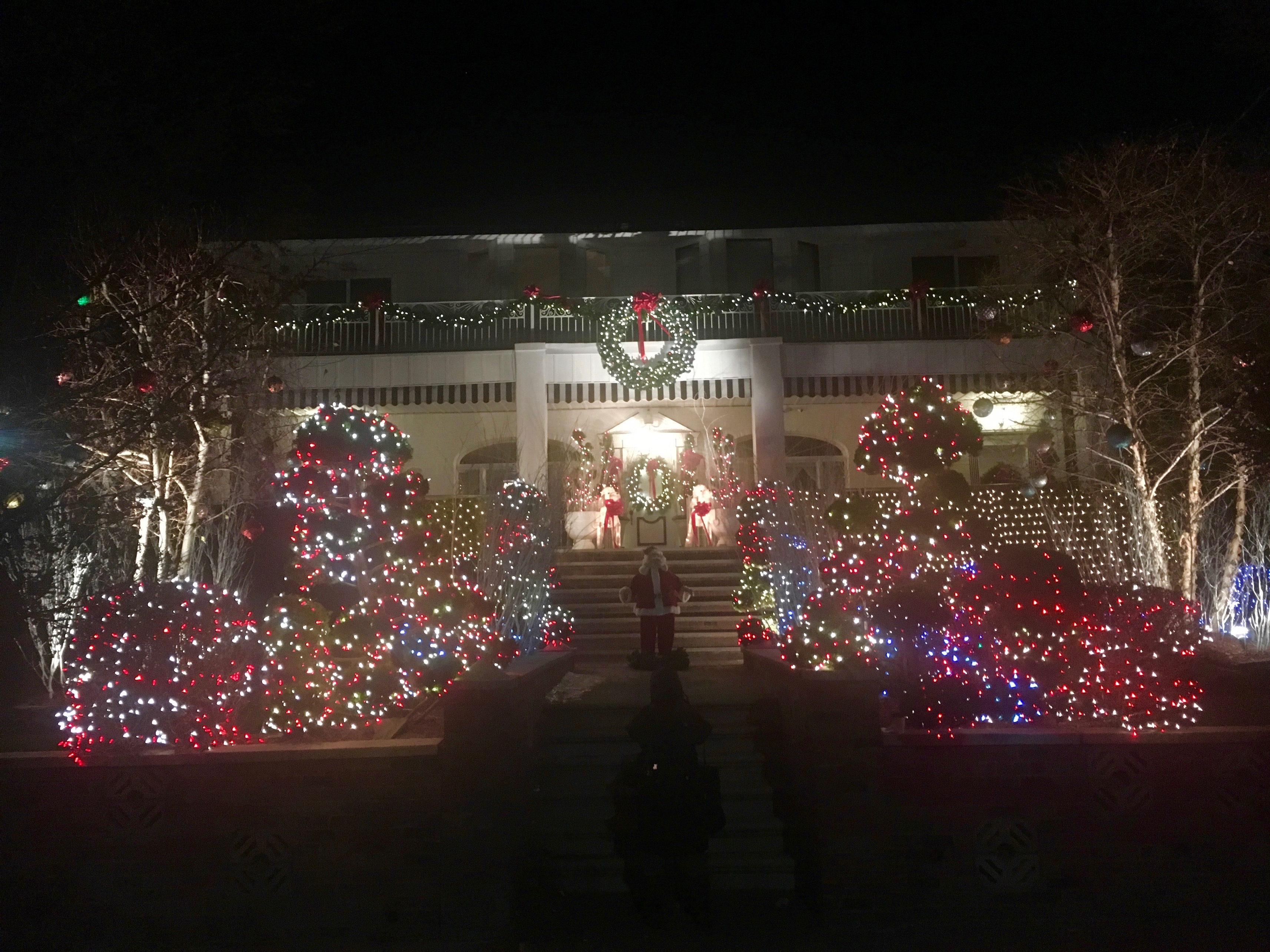 From the beginning, Dyker Heights was designed for home ownership — no tenements and few apartment complexes — and it’s a tradition which mostly lives on today. From an 1899 article: “Dyker Heights is carefully restricted, the restrictions running till 1915 and no building can be erected here on a plot of less than 60 by 100.Â Each building must cost at least $4.000 and stand well back from the street line.”

Below: A sampling of the dozens of electric manger scenes awaiting you in Dyker Heights. 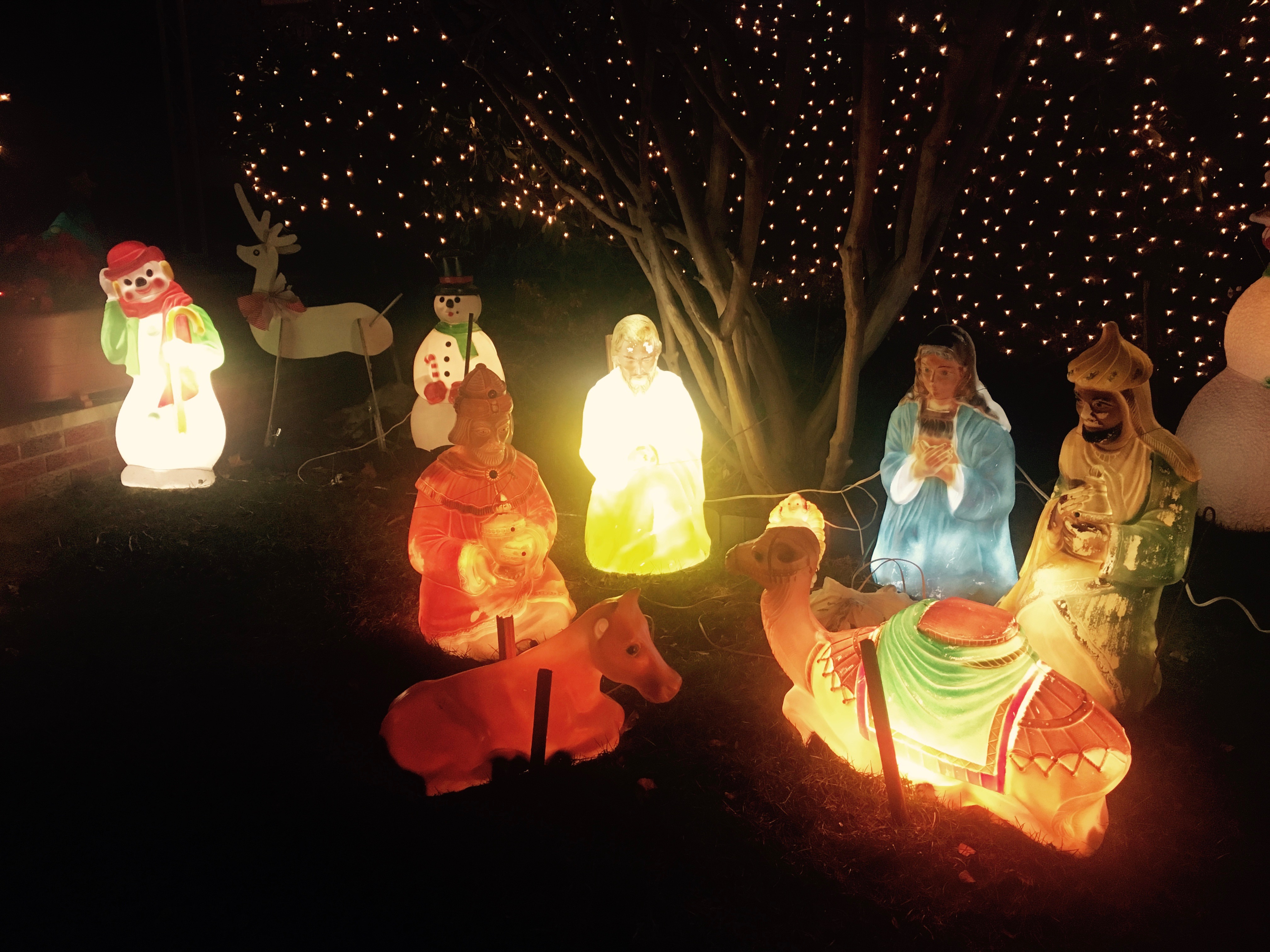 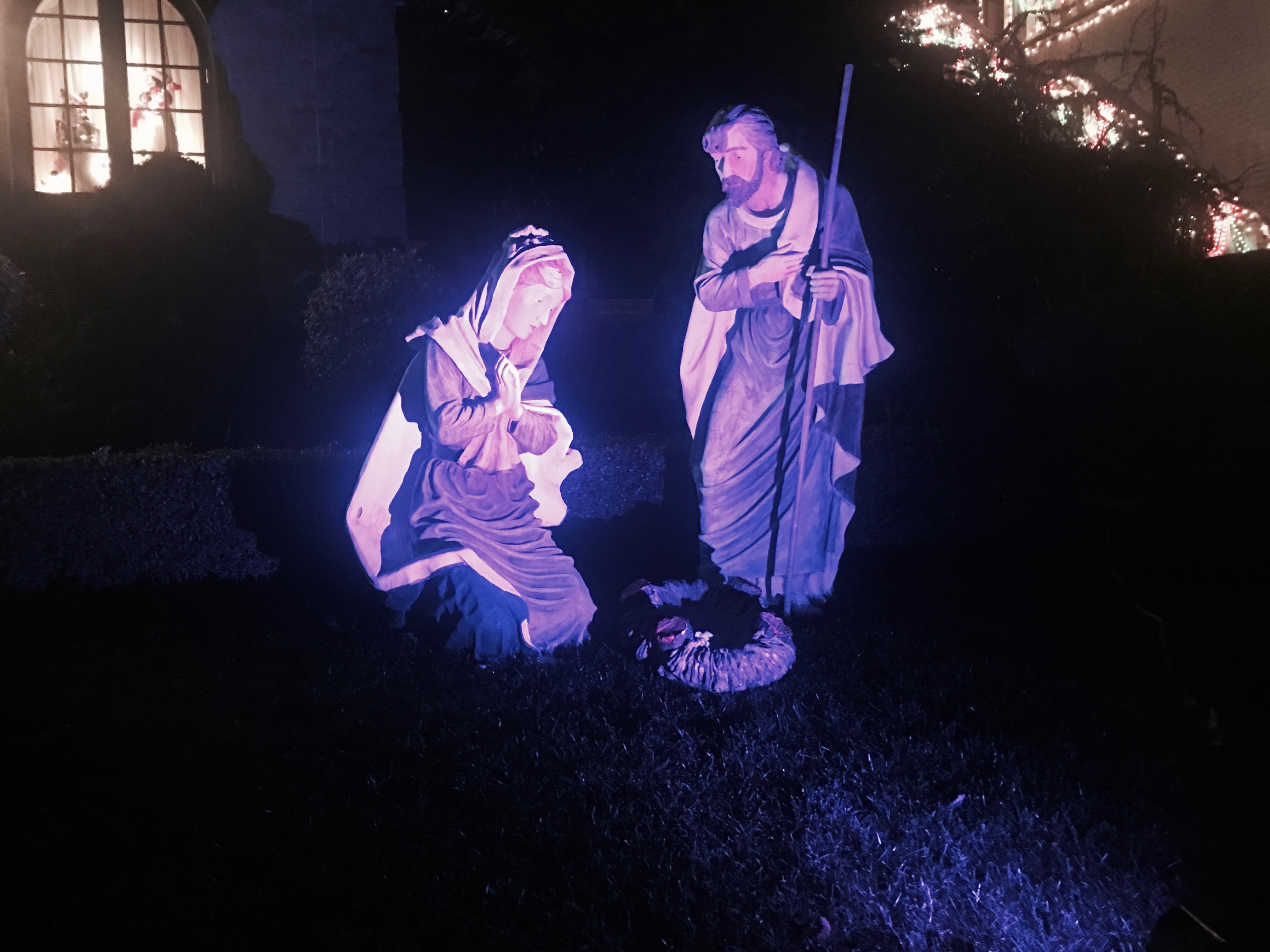 Today Dyker Heights is a predominantly middle- to upper-middle class Italian neighborhood, anchored by the Dyker Heights golf course and sandwiched between Bay Ridge and Bensonhurst, with old Fort Hamilton to the southwest and what remains of the old Bath Beach resort area just southeast of here.

What Mr. Johnson could not have predicted â€” heck, what Thomas Edison, inventor of electric light bulb, could not have foreseen â€” is the annual holiday expression that occurs on the lawns of many Dyker Heights residences through December. 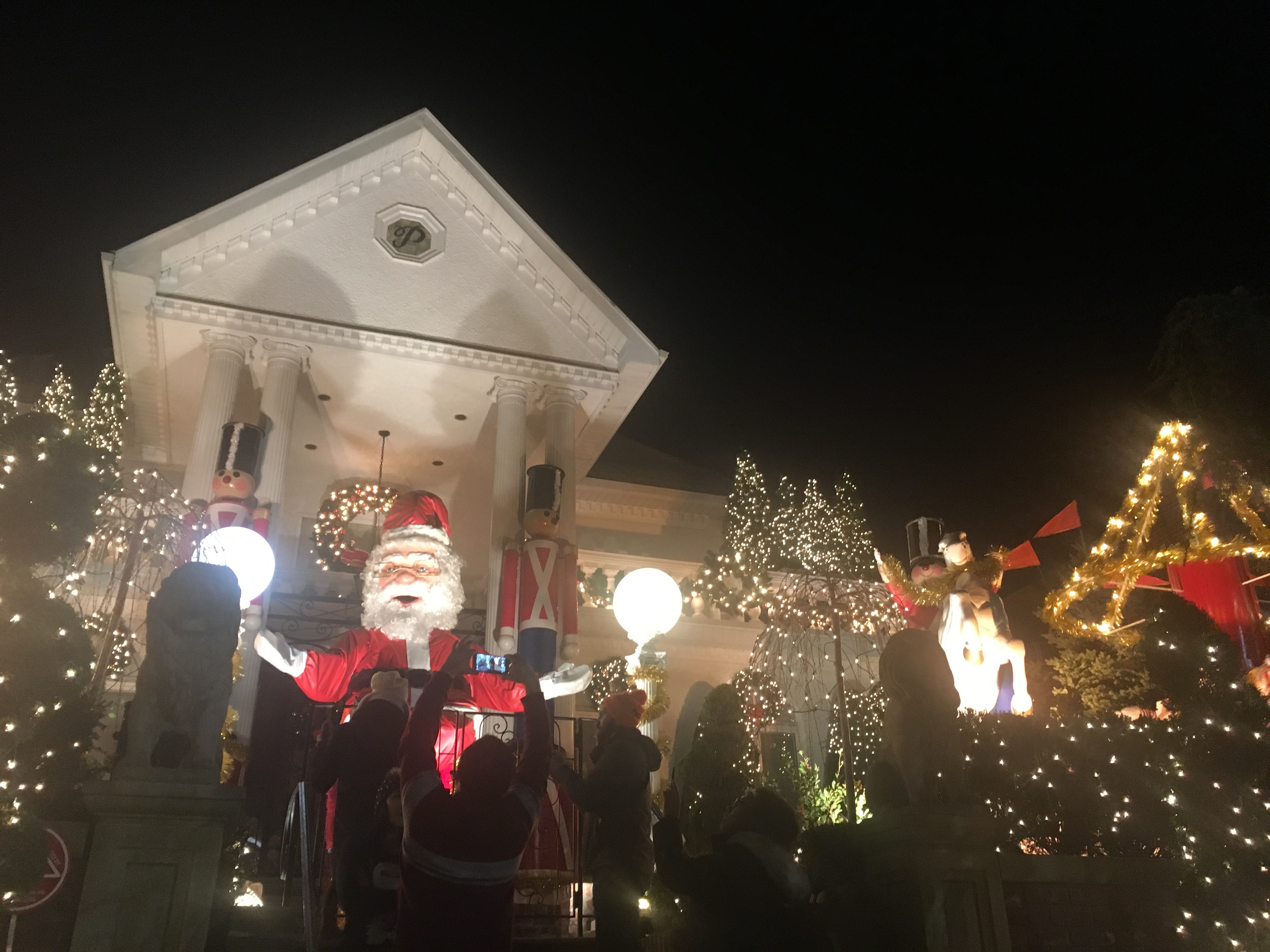 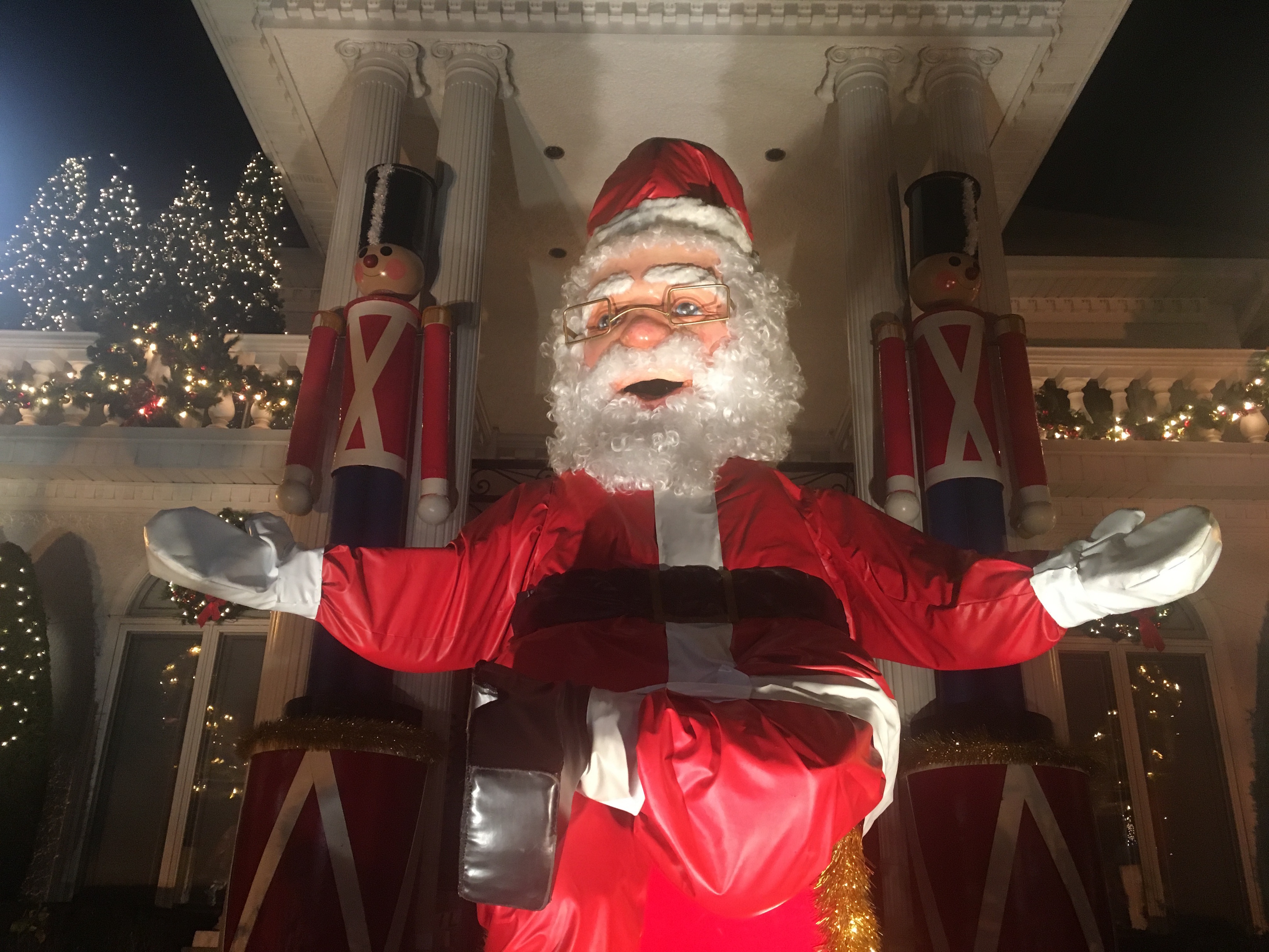 For the holidays, the busy lawns are then burdened with an abundance of lighted sculptures, animatronic dioramas, and every manner of festive lawn display imaginable. Dozens of trees of all varieties — from willows to even palm trees — are garbed in multi-colored lights. 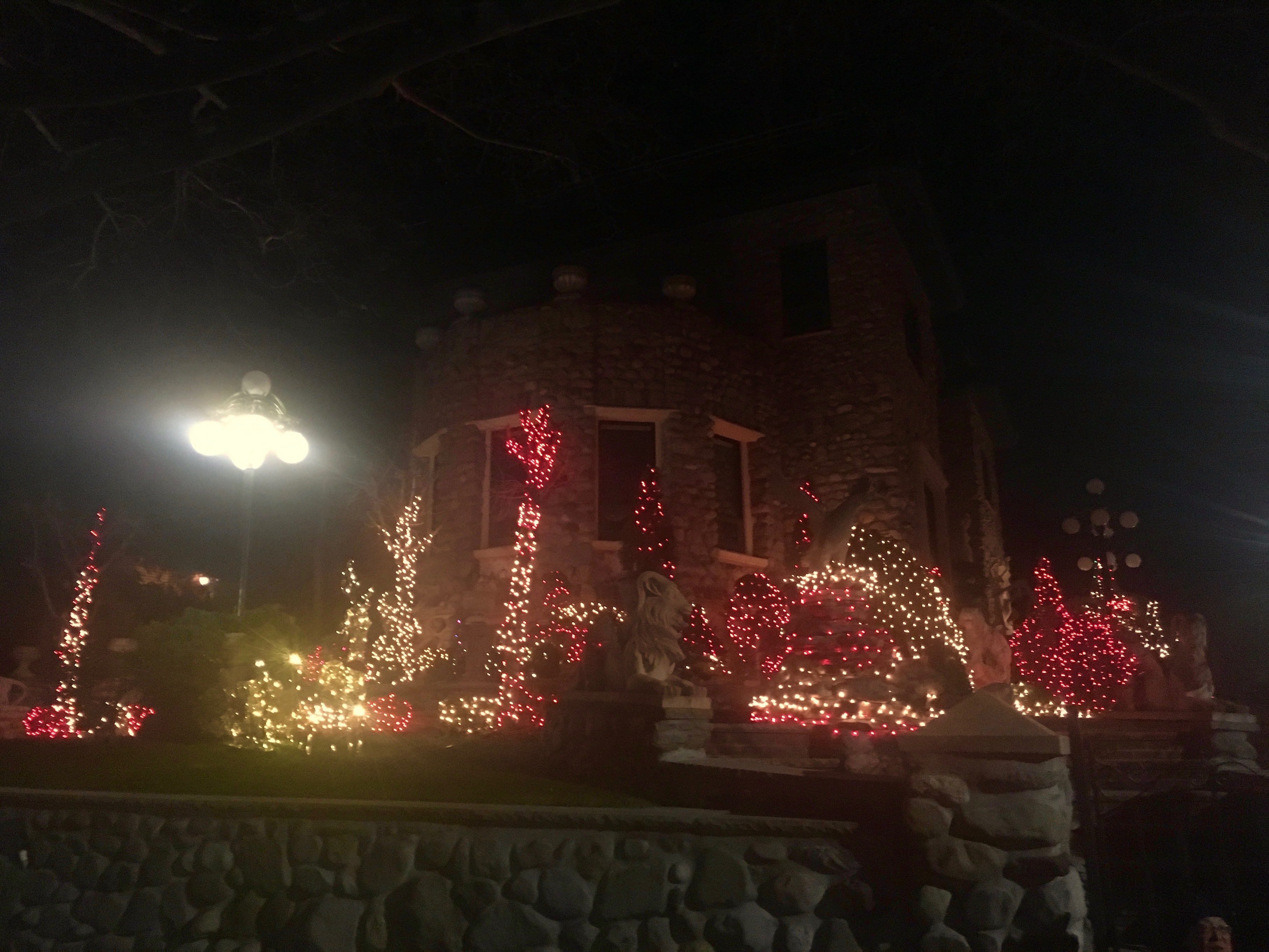 Befitting an organic neighborhood celebration, the origins of this annual tradition are a bit hazy. Families began hosting displays as far back as the post-war years of the 1940s. An article from the New York Times Â suggests that the neighborhoodâ€™s Italian leaningsÂ may have something to do with it.

The show is concentrated between 81st and 84th Street and between 10th and 13th Avenues, but in recent years, it easily spills over to other blocks and even into the borders of adjoining neighborhoods. 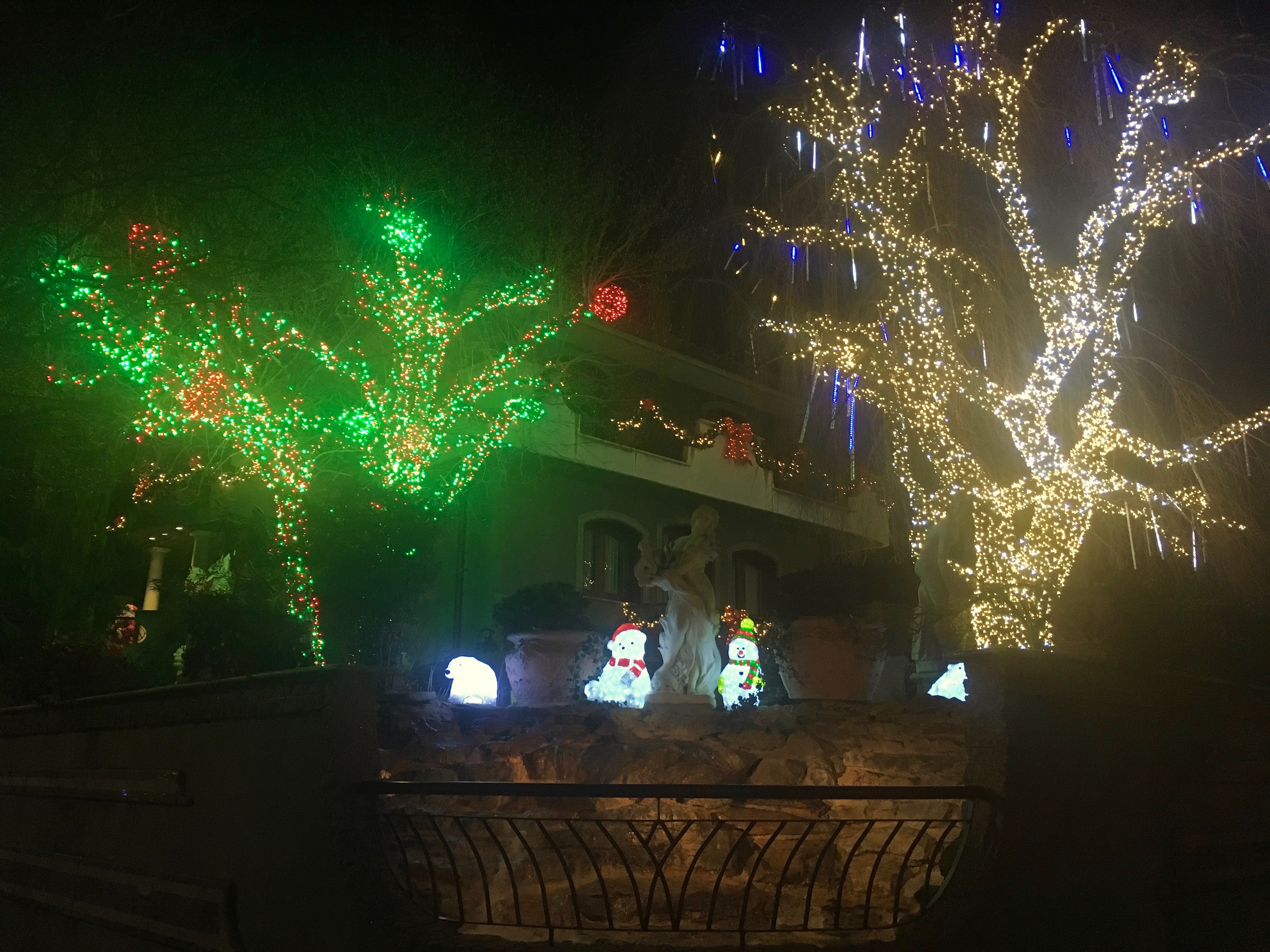 This is a curious tradition, as the best way to enjoy the show — on foot — is obviously the most uncomfortable, especially on brisk December evenings. Â There are fine tour companies which present bus tours of the Christmas light show, and if you’re averse to chilly temperatures, they’re the best way to go. (Free Tours By FootÂ and A Slice of Brooklyn are two reliable tour operators which offer holiday bus tours well into the new year.)

But I prefer seeing the electric light madness on foot, soaking in the Christmas music that seems to emanate from every home. Just grab a giant coffee or cocoa and go! Most of the homes will be festively lit until at least New Year’s Eve.

Better yet, before or after your stroll, head up to this amazing place on 13th Avenue and 83rd StreetÂ and fill your pockets with cannoli. 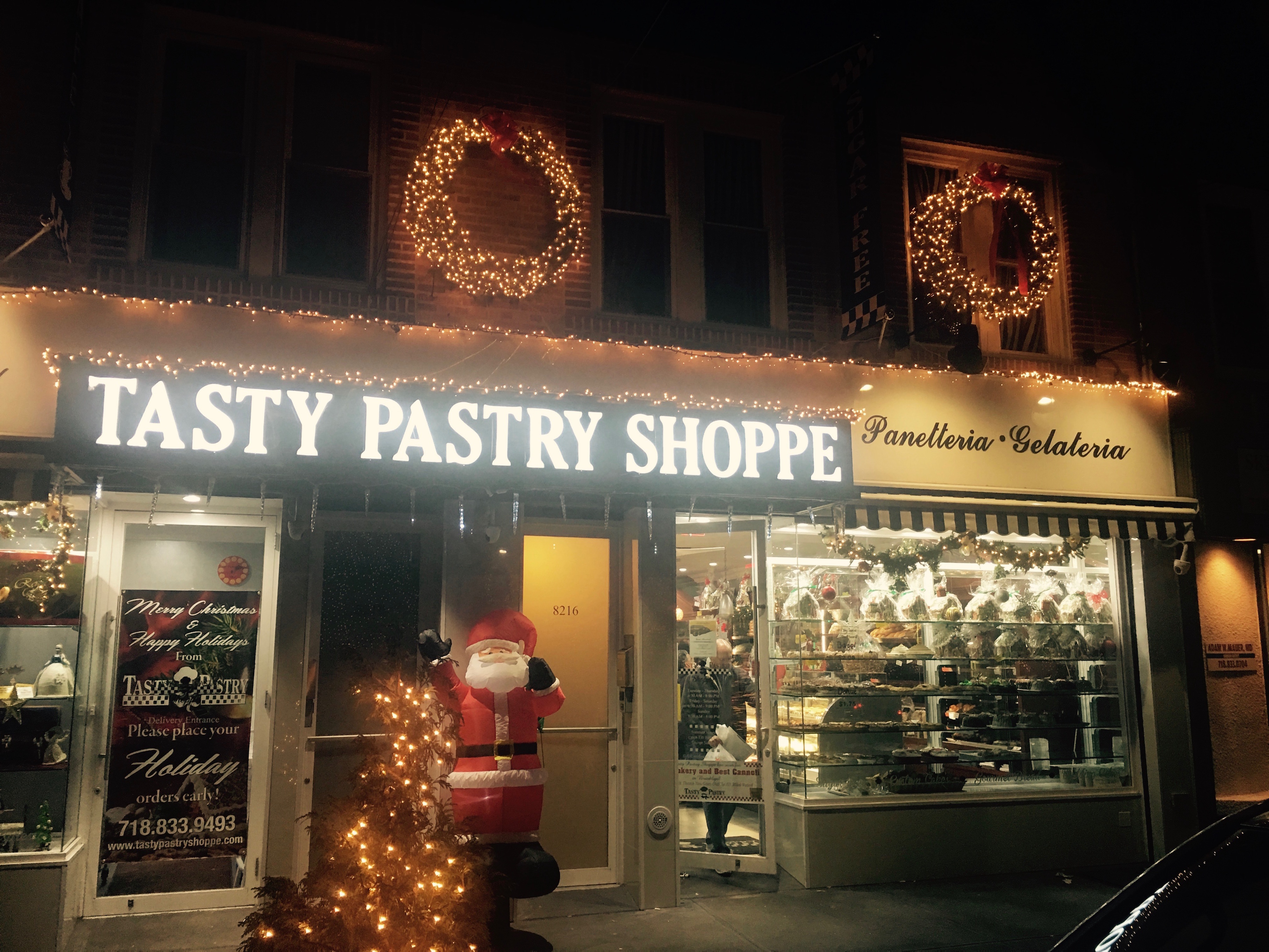 By the way, much of the history of Dyker Heights was unearthed several years ago in a thesis paper by then student Christian Zaino.

A model example of a budding New York historian, his research was so exhaustive that one of Dyker Heightsâ€™ more glamorous homes â€” theÂ Saitta HouseÂ â€” entered the National Register of Historic Places on the strength of his research. In fact, this is probably one of the few instances that you can use Wikipedia for a resource, as ZainoÂ wrote the page. (In 2014, he also made an hour long documentary film about the history of Dyker Heights. You can watch it here.) 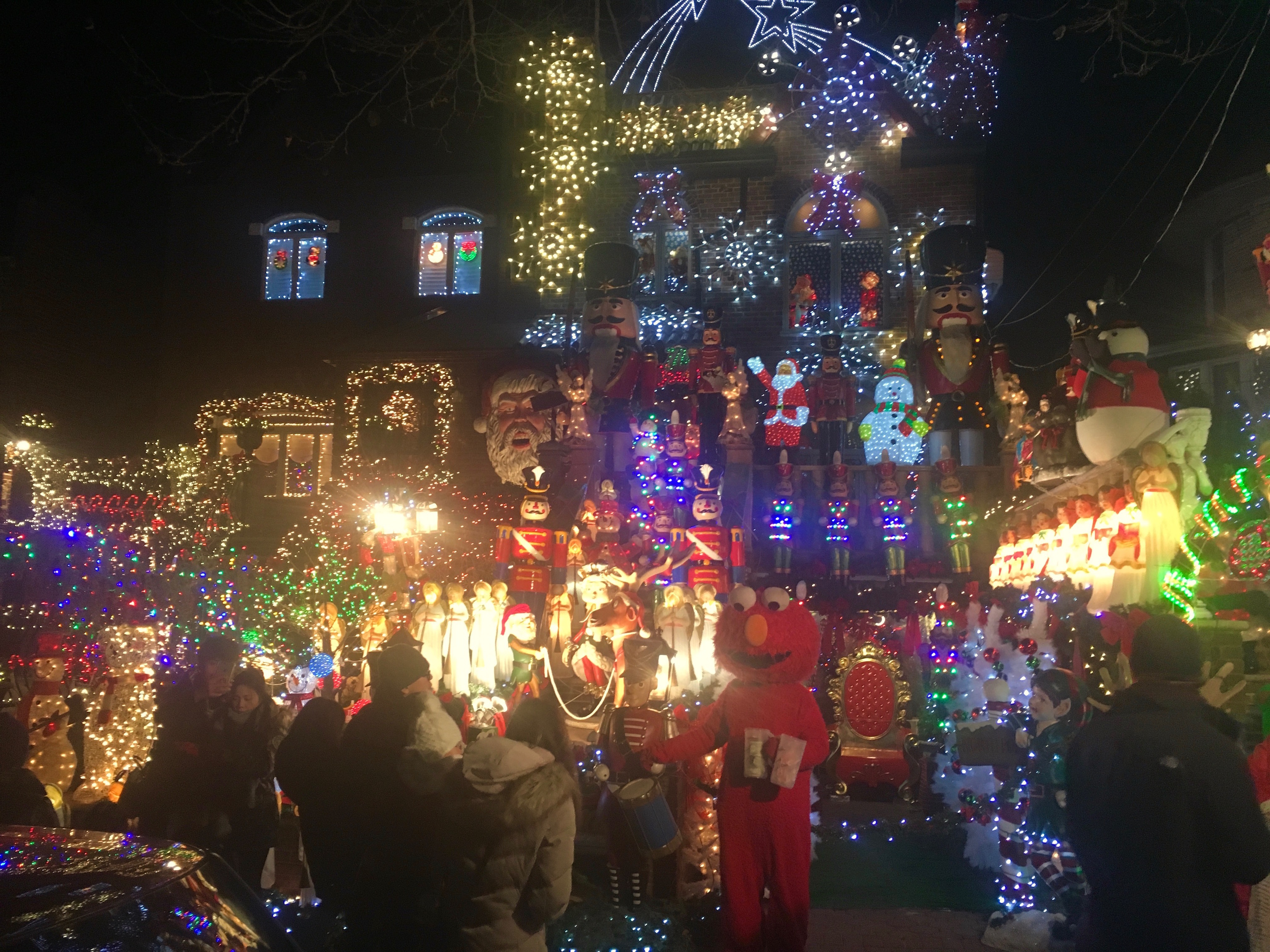 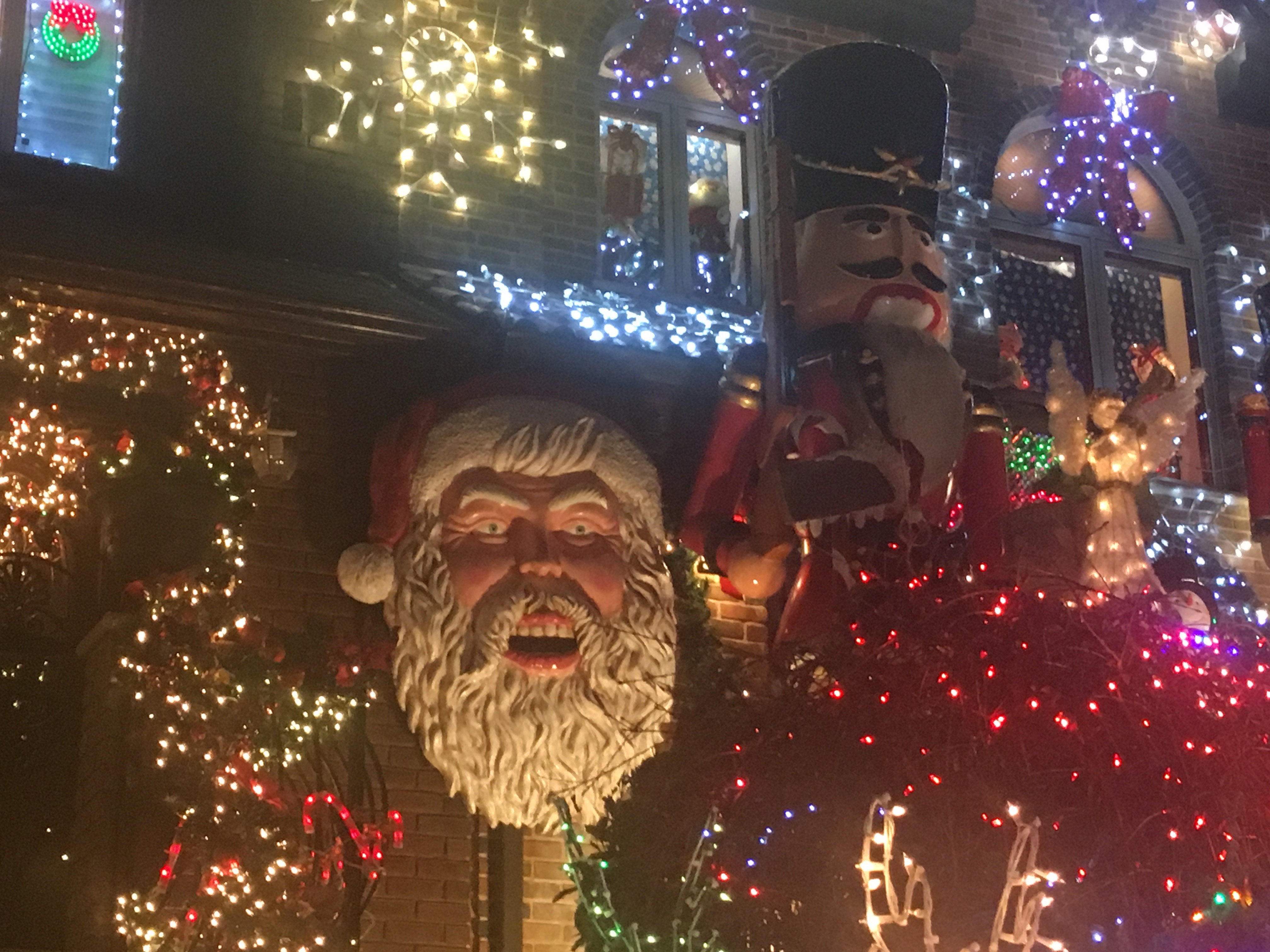 Portions of this article were taken from another Bowery Boys article Blinded By The Lights of Dyker Heights.