According to the Officer Down Memorial Page, there have beenÂ 816Â New York law enforcement officers who have died in the course of duty. Most of those who have died in the page six yearsÂ succumbed to 9/11-related illnesses. The last firearm-related death, Paul Tuizzolo,Â sadly came just a last month, killed in a gunfight in the Bronx.

The official count considers all NY officers from as far back as 1802 and the days of the New York City watch under the supervision of its renown High Constable Jacob Hays, pictured below. (See our podcast Case Files of the NYPDÂ for more information.) Hays would be the sole administrator of this early form of law enforcement and would lead the group until the formation of the New York Municipal Police in 1845. 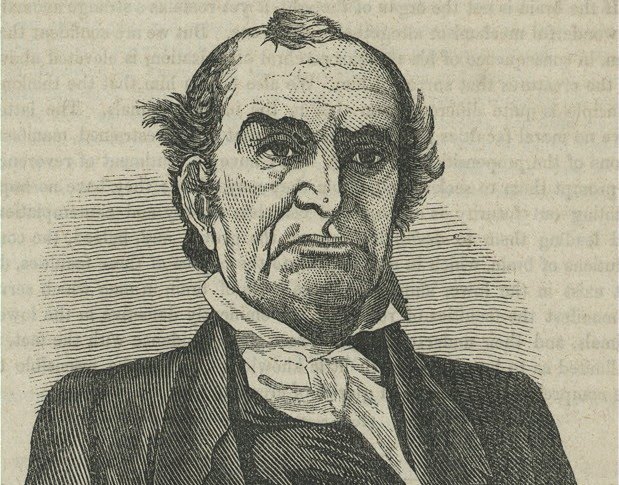 The watch’s first casualty came in 1806. The man’s name was Christian Luswanger, murdered in the line of duty during a very unthinkableÂ altercation.

In 1806, New YorkÂ was still a city shaking off its colonial trappings and still finding its identity. The mayor of New York that year was 37-year-old DeWitt Clinton, the well connected nephew to the former governor of New York and a man with great things in his future. The British had been gone for over two decades, and the city and its port were rapidly growing. But the real jump starts to the city’s economy and expansion — the Erie Canal, the debut of the steamboat, the Commissioners Plan — would come in the next decade.

New York was small but restless. When mayor Edward Livingston formed the night watch in 1801, it required only a handful of men, overseen by a Watch Committee on the city council (or Common Council). By 1806, all watchmen reported to Hays, and the constable reported to the council, who often directly advised on priorities. “The Captains of Watch in the first district [should] be particularly attentive to the neighborhood of Burling Slip,” according to the minutes of one council meeting.

Broadway and City Hall, in 1809. The mobs of the so-called ‘Augustus Street Riot’ would have scuffled just to the west of this illustration. (Courtesy NYPL) 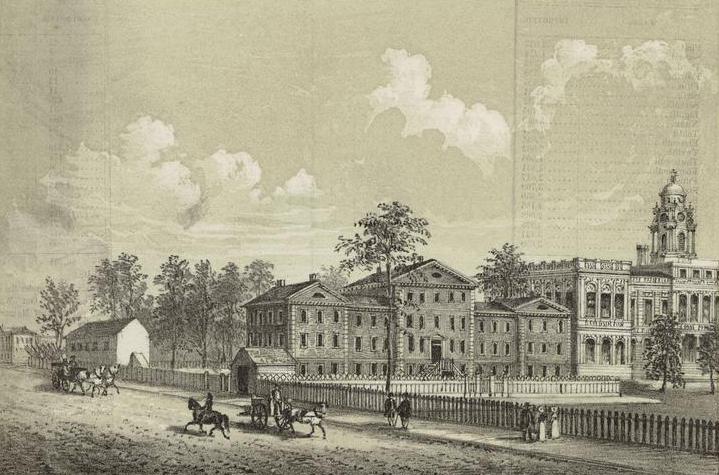 Hays supervised a couple captains for each of New York’s wards — captains with such sturdy names as Magnus Beekman, Nicholas Lawrence, Gad Dumbolton and William Van Wart. Those captains had other men reporting to them, including Christian Luswanger, of which almost nothing is known — regular watchmen didn’t appear in the council payrolls, only the captains — nothing at all, except for the event which took his life. An event sometimes referred to as the Christmas Riot, the Highbinders Riot or the Augustus Street Riot, so named forÂ the forgotten street where many of the rioters lived*.

The original St. Peter’s Church at the corner of Barclay and Church Streets. 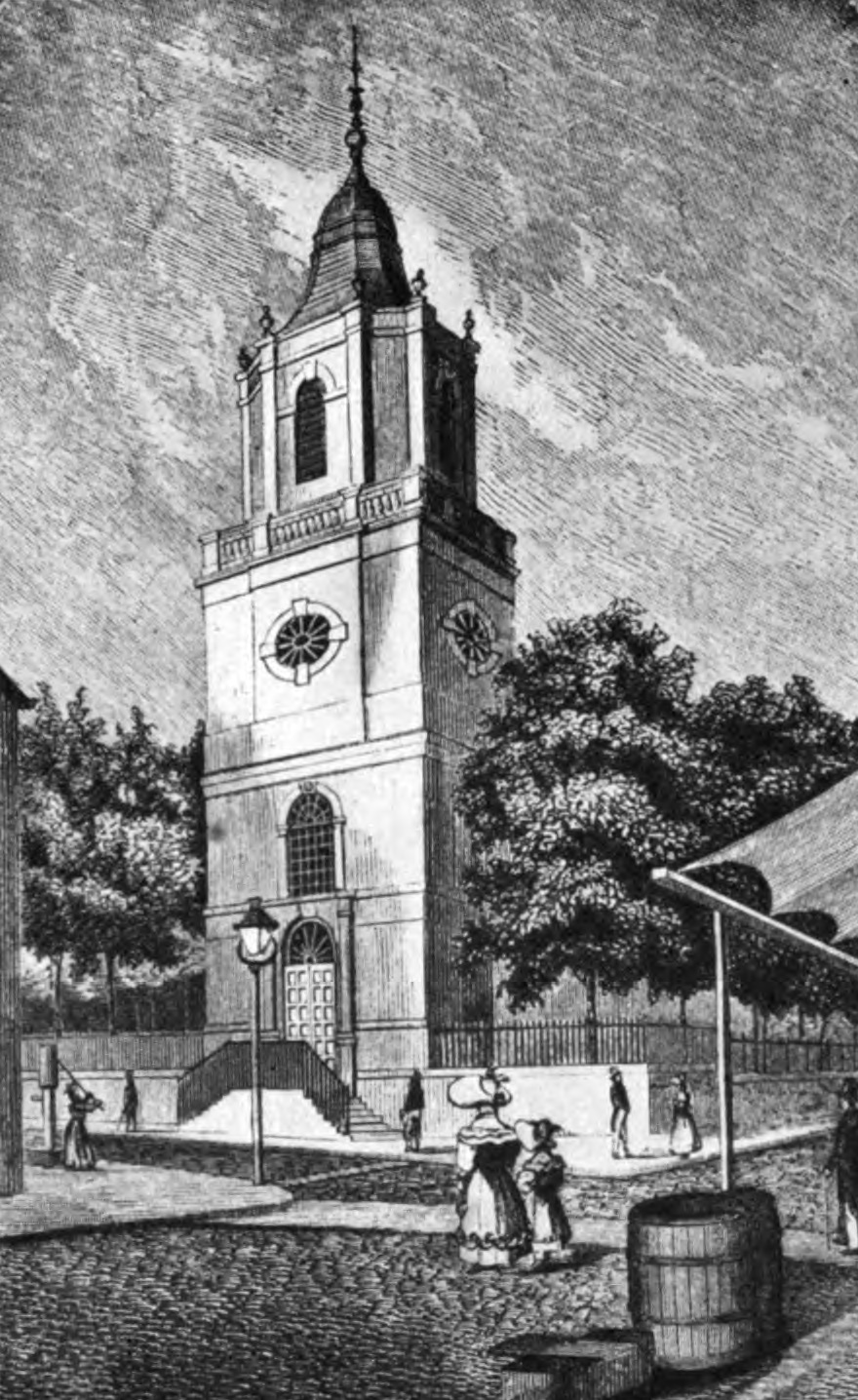 In 1806, St. Peter’s ChurchÂ  — at Barclay and Church Street — was the only parish in town if you were a practicing Catholic. (The current St. Peter’s, sometimes called Old St. Peter’s, a simple, neo-classical gem near the WTC site, was built over the location of the old structure in 1840.) Its most famous congregants would be Elizabeth Ann Seton, the first American to be declared a saint, and the venerableÂ Pierre Toussaint, who’s currently interred at St. Patrick’s Cathedral.

Built in 1785, St. Peter’s was a perpetual target of anti-Catholic sentiment, and indeed, horrific violence would erupt here on Christmas morning 1806. As worshippers gathered for midnight mass, a group of nativist rowdies gathered outside, prepared to disrupt services.

One source, perhaps drawing from a contemporary New York Evening Post article, calls the group of about fifty a ‘gang’ called the Highbinders. However I’m not exactly sure it was any kind of an organized gang. The word ‘highbinder’ would eventually come to mean any kind of gangster and would even be slang for a corrupt politician. The first ‘gang’ of New York is commonly thought to be the Forty Thieves, who wouldn’t surface for at least another twenty years.

Simply consider them a massive of drunken, anti-Catholic thugs — sailors, according to one source, “a nativist gang of apprentices and propertyless journeyman butchers” according to Edwin Burrows and Mike Wallace — all looking to cause trouble.Â  Still another newspaper referred to them asÂ “a desperate association of lawless and unprincipled vagabonds.” [source]

Parishioners ran to get their alderman whoÂ successfully convinced the group to disperse for the evening.

However the mob whichÂ returned the next night — Christmas night — far more incensed, only this time the churchgoers were ready, armed with weapons. The defenders at St. Peter’s were not merely parishioners butÂ other Irish immigrants who had heard about the prior evening’s altercation and came looking for a fight.

Many other Irish New Yorkers stood watch over their homes on Augustus Street, waiting forÂ the anti-Irish mob to arrive there. That night, the two groups clashed inÂ the streets, a few dozen men on each side,Â attacking each other on the streets around City Hall.

In this melee, the watch were called to quell the violence and arrest the rioters. Jacob Hays may have been there; several of his captains certainly were. Watchman Luswanger was called to join them. Somewhere along the way, a rioter stabbed Luswanger, and the watchman “expired without a struggle.”

The streets of Five Points in 1827, a short distance away from the riotous events of 1806. 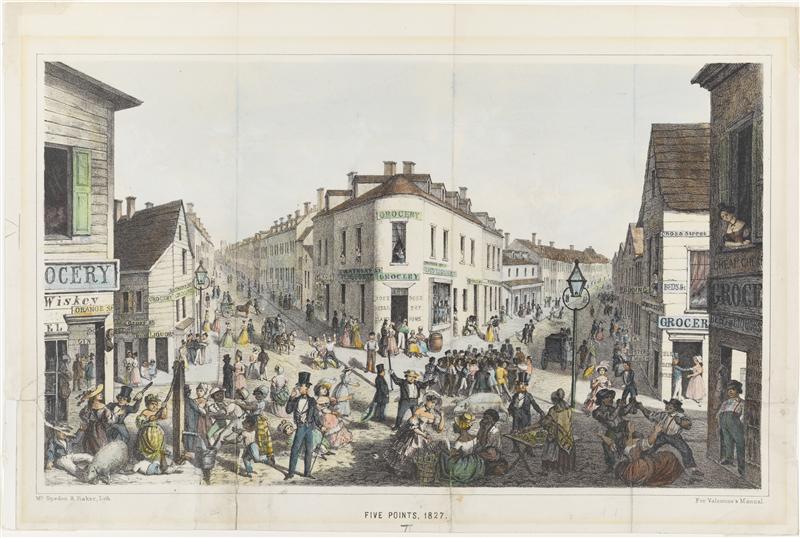 Apparently, this did nothing but bring more rioters into the chaos.

Diarist and fellow rowdyÂ William Otter presents a vivid recollection of these events, although he does not mention Luswanger:

“The church was surrounded with a motley crew of Irish and sailors … engaged in deadly conflict … The mob fought from the door of the church to Irish town, being the distance of about a fourth of a mile ….Â

“[W]e fell to and drank as much as we pleased, and while we were refreshing ourselves the mob came in and began to break bottles, glasses, pitchers, barrels and all and every thing they could find in the shop; and fought on till day light through Irishtown; laying all Irishtown waste; a great deal of property was d was destroyed by the mob, and a great deal of human blood shed.”

It took most of the night watch and the light of day to dissolve the rioters. Ten men, all Irishmen, were arrested. The mayor offered a reward for any information on Luswanger’s demise, but danced around firm condemnation of either group. I’m gathering from the lack of evidence that the case of who stabbed the watchman remains unsolved.

NOTE: One of my prime sources on this article states that the watchman’s name was Christopher Newfanger, not Christian Luswanger. I believe the latter is correct, and it is the name officially recognized by the police department.

*According to Forgotten New York, Augustus Street “was later called City Hall Place and in 1941 it was again renamed for Patrick Cardinal Hayes who had died in 1938.” Today the street is gone, contained in the pedestrian plaza of Civic Center, near St. Andrew’s Church.Â

NOTE: There are no images or illustrations of the Highbinders Riot. The riot depicted at top is actually of a Lower East Side riot in the 1860s. 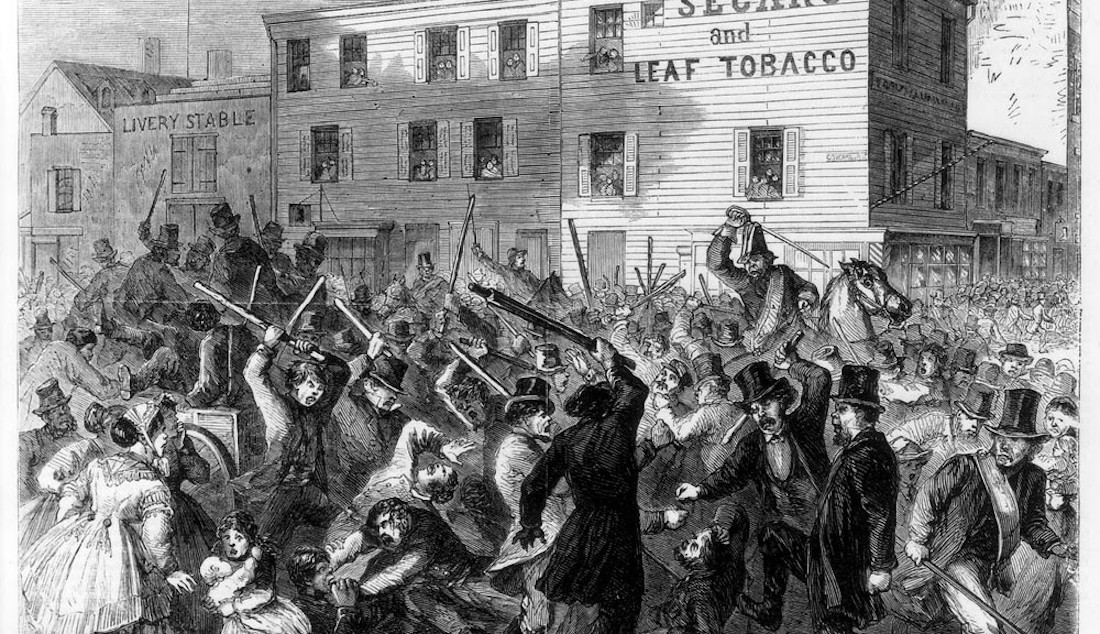