John F. Kennedy, the 35th president of the United States, was memorialized in dozens of ways following his assassination on November 22, 1963. None of these are more vital to the daily lives of New Yorkers than John F. Kennedy International Airport — or Kennedy Airport or simply JFK — the business airport in the northeast.

You may not realize how quickly it was renamed for the fallen president. On November 15, 1963, President Kennedy left Idlewild Airport (the airport’s former name) after a short stay in the city. Six weeks later, that airport would be named after him.

New York joined the nation in mourning following the televised funeral of President Kennedy on November 25, 1963. Thousands watched the ceremony from a large television screen hanging in Grand Central Terminal. Traffic stopped in Times Square and buglers played taps from atop the old Hotel Astor. All airport traffic at Idlewild stopped at noon.

New York Like A Vast Church ran the headline in the New York Times.

Calls immediately rose to memorialize the president in the city. On December 4, less than two weeks after Kennedy’s death, Mayor Robert Wagner announced that he would submit a bill to the city council to honor Kennedy with a name change to the Idlewild.

Unfortunately, these ultimately successful calls to rename New York’s largest airport came at the cost of obliterating the memory of another great American.

Idlewild was the popular name for the airport which opened on July 1, 1948, because it was built upon a former golf course and luxury accommodation of that name. According to the Times, “The name Idlewild is believed to have been inspired by the fact that the site at that time was wild and that the hotel and park constituted a recreational facility for the idle rich.”

But its full, official name was New York International Airport, Anderson Field, named for Major General Alexander E. Anderson, a decorated World War I veteran and Queens businessman. Unfortunately Anderson had few proponents fighting to keep his name on the airport by 1963.

It was revealed then that city officials wished to name the airport after Kennedy even more quickly than that. Indeed, the idea had been unofficially approved hours after Kennedy’s assassination but it had taken the extra time to get the official approval from his widow (and future New York City resident) Jackie Kennedy.

By Wednesday, December 18, the name change had been formally approved and workman busily rushed to change all the signs at the airport. Idlewild officially became John F. Kennedy Airport in a ceremony held on Christmas Eve 1963.

The president’s younger brother Edward Kennedy was in attendance, helping to unveil a 242-foot-long sign emblazoned with the new name. Their brother Robert F. Kennedy was scheduled to attend but canceled. 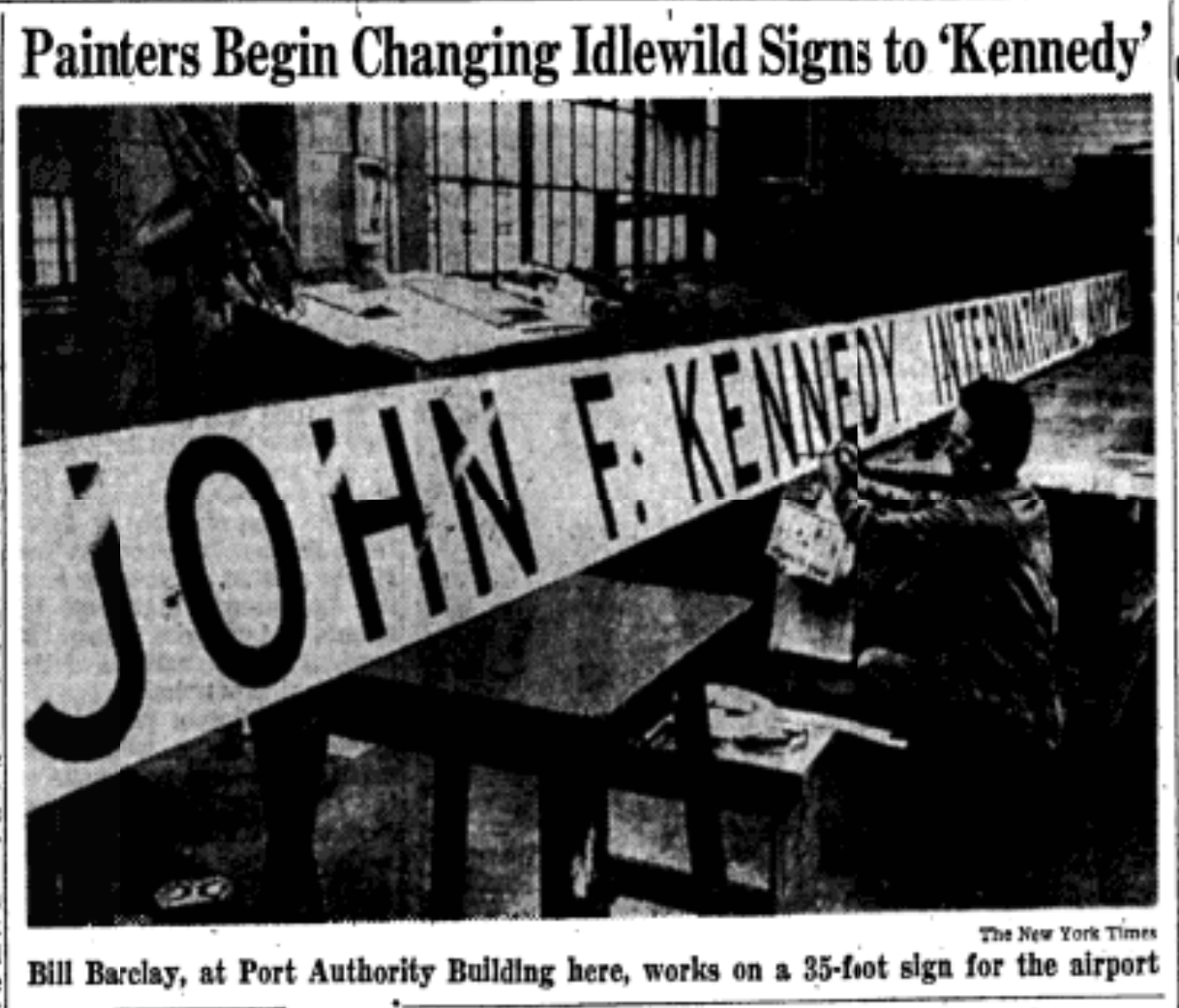 You would think such a name change to be relatively uncontroversial but this was not the case.

In an editorial which ran a few days after the ceremony, the New York Times remarked: “The speedy change of name — whether it be of an airport or a bridge or a park or a cape — reflects the love that millions of people all over the world had for Present Kennedy; but, as we have previously stated, it is only debasing the subject of our grief to attach his name so hastily to a miscellaneous collection of public works, almost as if we were afraid that without these tangible reminders he would be soon forgotten. “

And President Kennedy almost got his name upon a newly built bridge in the New York City area, too.

That same month, a Staten Island politician filed a bill to the New York state legislature to name a new bridge being built in the Narrows after Kennedy. “Assemblyman Edward J. Amann Jr … profiled at Albany for introduction into the Legislature in January a bill calling for changing the name of the Verrazano-Narrows Bridge to the John. F. Kennedy Memorial Bridge.” [source]

The Verrazano kept its tribute to the 16th century European explorer. But New York does have a bridge named for a Kennedy — the Robert F. Kennedy Bridge (the former Triborough Bridge).

Below: A month after the dedication, Robert did stop by the airport named after his brother.

28 replies on “The story of how Idlewild Airport was renamed for John F. Kennedy”

A costly, hasty error, in my opinion. If any city should have renamed their airport to JFK it should have been Boston. Can you imagine an alternate universe in which the big New York airport is named after someone who actually lived or died in New York? How about Joey Ramone or David Bowie (who lived his last 22 years in New York)? Or maybe even Jane Jacobs, who saved SOHO?

Even worse, even more ridiculous, was New York City re-naming the Triboro Bridge for Robert F. Kennedy in 2009, more than 40 years after his assassination.

Agreed! And he didn’t complete his Senate term (for two obvious reasons), And yet, we still call his seat the RFK seat. Clinton had it. Now Gillenbrand has it.

Might as well call it the “Democratic Carpetbagger Seat.”

Even though it was renamed to RFK, a lot of New Yorkers still call it the Triboro. Not sure why they renamed it.

How about Margaret Sanger? I’d get behind that. Legalized abortion is the reason we’ve gone from 1,000 homicides per year to 300. Thank you, Ms. Sanger. And enjoy your flight.

Margaret Sanger – the lady who called for abortion in order to keep black folks from reproducing. Yeah, she was a class act & a progressive of her time. Social Darwinism, another gift of academia (sarcasm).

Yeah, all he got was a parkway and a state park in Suffolk county named after him.

A brilliant assessment; proof not all America stays up to watch live Australian footie at 4am, EST.
Bless you for your insights.
Cordially,
Jerry Briggs, Philadelphia

There is no other name I can think of in these very troubled times that would better suit the New York City airport. All day, every day, those who see
those letters “JFK” all over the world have a moment to learn that America was a place of dignity, righteousness and strength. The other names would be ok, but JFK is a powerful reminder that America was great once and that, underneath the current election mess and lack of leadership or a moral compass, the American people are great! We need to remind ourselves and the world that those masquerading as leaders of our country are a temporary mistake and America is and will always be the land of the free.

Ironic because his election was another electoral mess.

I couldn’t have said it better.

I find this ironic, seeing how Kennedy’s election was ALL messed up, and he was known for his affairs.

JFK was not “known” for his affairs. He was known for his brilliance and the hope he inspired in American and for American worldwide. Go suck your thumb, Cade.

Kennedy was as corrupt as anyone, maybe more, and he definitely had zero respect for women. Pretty well known Jackie helped him with “Profiles in Courage” and his speeches. Also, understand that she had everything to do with securing his popular legacy.

Ted Sorenson supposedly helped him write Profiles in Courage and was his White House counsel, and helped write his inaugural address and the ‘go to the moon” speech.

Having grown up with a love for the mystery and romance of Idlewild Airport, I was saddened that it was taken away from the locals by some subservient (now called Politically Correct) desire to honor an out-of-town politician. Likewise with the Triborough Bridge. I had barely gotten to know that part of the greater NYC area when it too was hit with decadent subservience to the Kennedy clan. Didn’t think of it at the time; but, certainly, Boston (i.e., Boston Logan International Airport) was the only airport that should have been up for renaming after John Kennedy. Wish it had been done that way. How about reparations for the loyal NY citizens who were not politically indentured to Kennedy by offering the JFK name back to Massachusetts. In the midst of reenactment of the mid-20th Century Civil Rights Movement, why not enact some consideration for native New Yorkers without fealty to John Kennedy and BRING BACK IDLEWILD.

Why don’t they call it the “John F. Kennedy/Idlewild International airport??” That way it remembers both JFK and the original name.

Or, we could call it Airport of Dead Presidents and not only honor others but cover future social upheaval.

[…] had offices at New York City’s Idlewild Airport (renamed John F. Kennedy International Airport in 1963). She worked on the draft of To Kill a Mockingbird and other projects in her spare time. But soon, […]

A befitting renaming to commemorate our dear president john f Kennedy welcoming immigrants and tourists from around the globe!
I reached from palam airport New Delhi as a teaching assistant in the mechanical engineering dept New York university Bronx by on 16 September 1964!! God bless America!

Does anyone recall The Interboro Airport ?.

Wherever there’s intelligent conversation they will always be moronic mentally deficient and completely ridiculous conservaturds spewing their dribble. I guess they must have gotten tired of playing with each other and decided to annoy the rest of the normal world with their irritating presence.

I was raised near General Anderson – Idlewild airport, relocating elsewhere before JFK’s accomplishments and his passing. The nostalgia may tarnish and the general’s heroics may fade a bit by the airport’s renaming to JFK. Life requires many trade-offs and I can’t complain, but I must agree that JFK could have better suited Boston’s Logan Airport. Idlewild could have been renamed for a worthy New Yorker. I’ve nothing against musicians like David Bowie or Joey Ramone mentioned above, but perhaps the musician who accomplished the most, not only in that area but in his work for international peace and understanding, was John Lennon. I suppose the argument against is that his name’s already used by Liverpool’s relatively little airport (it’s no Heathrow!). Lennon loved New York, born or raised nowhere near it, but choosing it from all of the world’s cities, which seems to mean much more. Too bad he was killed there, but we must remember that too. But I think renaming DFW airport for Lennon would be a fright too far.