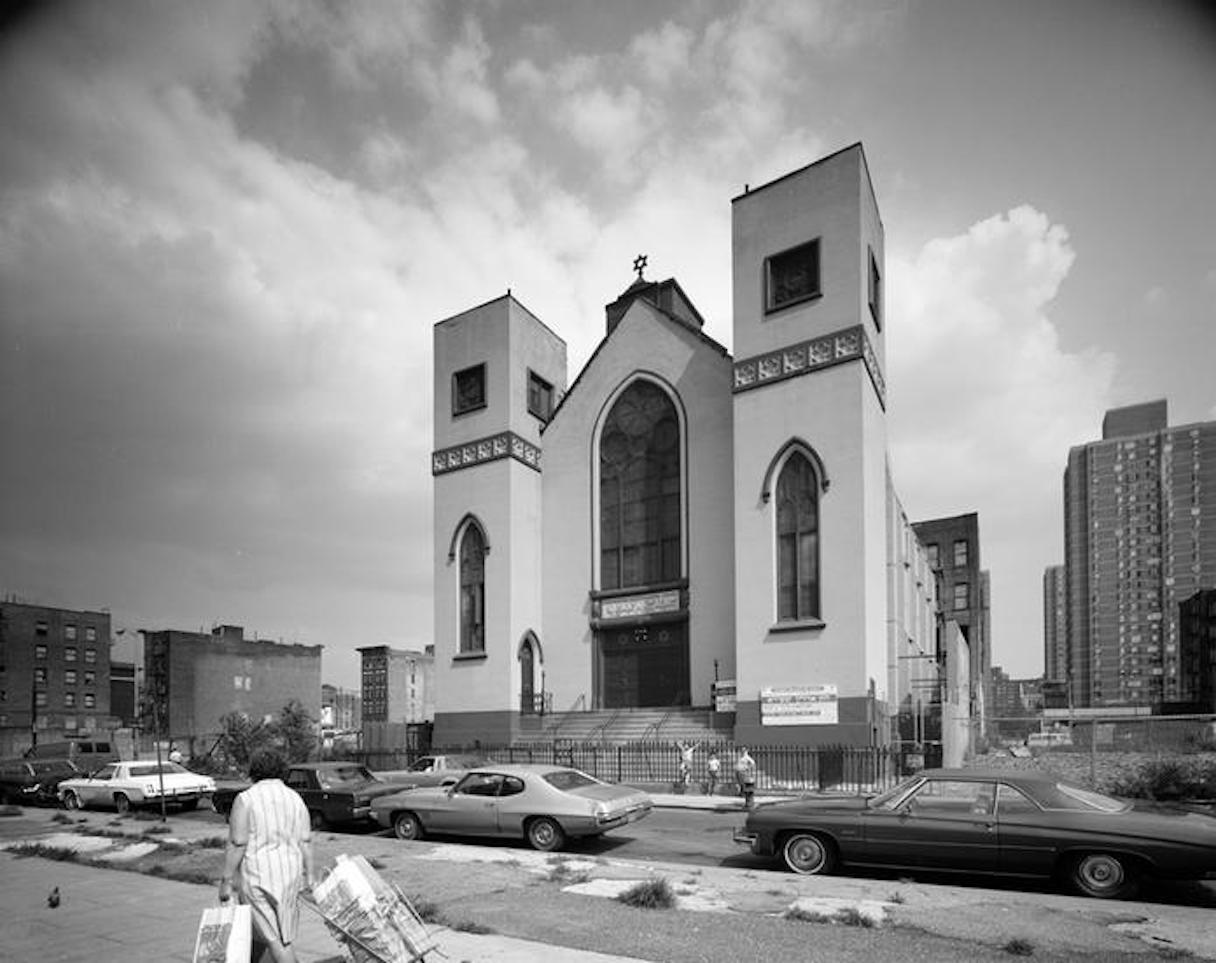 Last night a haunting and inconceivable ruin of the Lower East Side was mysteriously destroyed in a massive fire.

The abandoned shell of the old synagogue Beth Hamedrash Hagodol has been a feature of life of Norfolk Street, stubbornly nestled next to apartment buildings, a vestige of the past clinging to the present without care or purpose.

Here are a few pictures of the front of the synagogue as it looked several months ago: 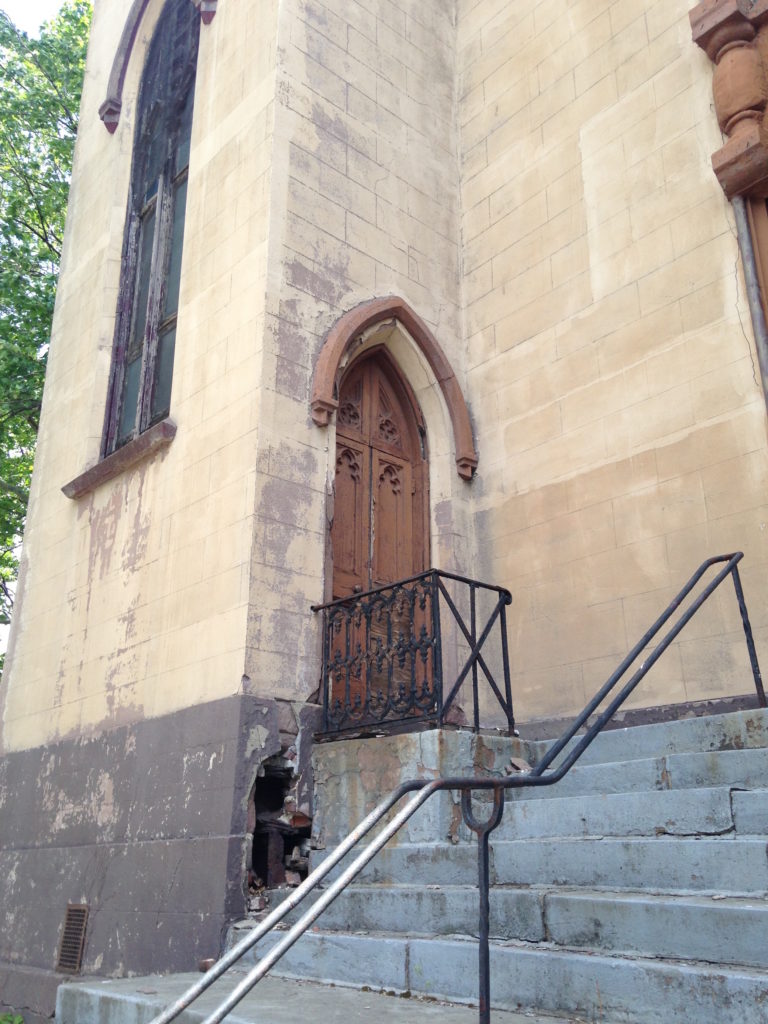 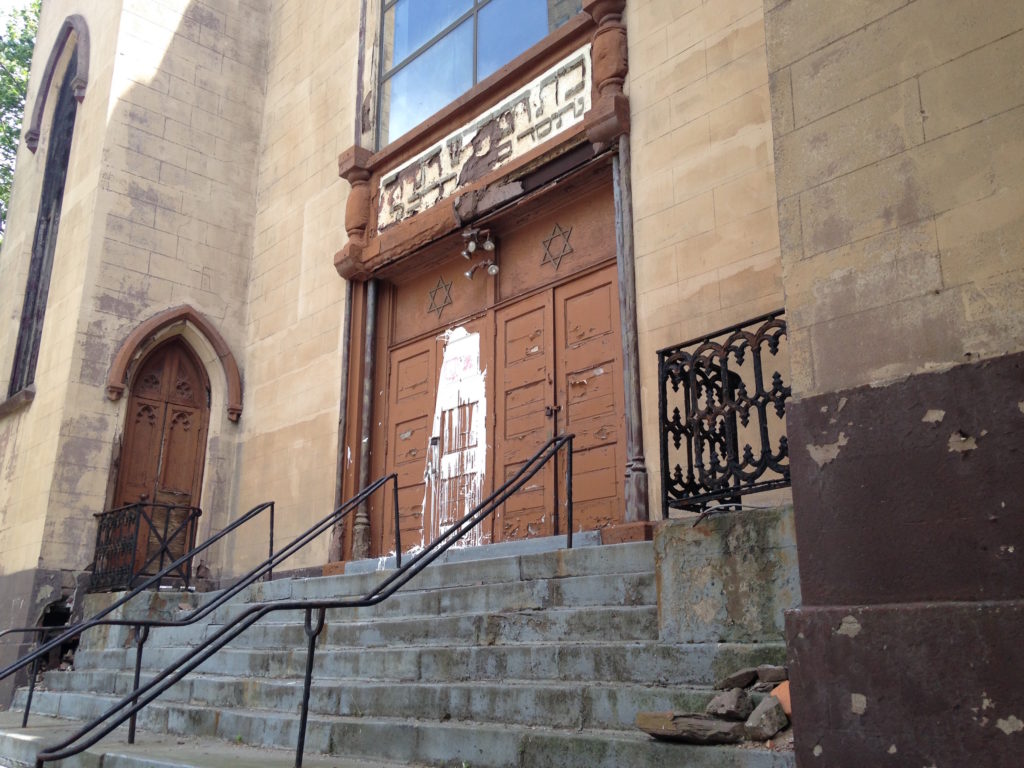 The building has an extraordinary history, important to the histories of both local Christian and Jewish communities.

The synagogue was featured in our book:

“Beth Hamedrash Hagodol, a nineteenth-century synagogue, sits in a sad, abandoned state today, as though everyone’s afraid to go near it. Built as a Baptist church in 1850, it too was converted into a synagogue in 1885. It played an important role in Jewish American history, as it was connected to the oldest Eastern European Jewish congregation in America (Beth Hamedrash, formed in 1853), and yet today it sits eerily unused. Hopefully somebody will come to its rescue before further deterioration—or the forces of gentrification—cause it permanent harm. (60–64 Norfolk Street)”

Below: The interior of the synagogue in an image taken in 2005 (courtesy Wikimedia)

Last night the ruins were gutted in a three-alarm fire. Bowery Boogie was on the scene last night, first observing the disturbing plumes of smoke that filled the Lower East Side a little before sundown last night.

This morning they got a little closer to witness the horrifying aftermath.

The Lo-Down was also there to witness its destruction. Please visit their blog today for more images of the aftermath of the fire.

Huge fire on the Lower East Side pic.twitter.com/N2tDUMa9Ds

Corner of Norfolk and Broome. Is this the Beth Hamdresh temple? #NYC#Fire🔥🔥🔥pic.twitter.com/DEsWOOvpah

The fire seems to have some similarities to that of last year’s destruction of the Serbian Orthodox Cathedral of St. Sava, another New York City house of worship built in the 1850s with its own unique significance to the city’s history.

The new Essex Crossing development is rising just a couple blocks north, poised to transform this area of the Lower East Side. Consider me an optimist, but I always thought the ruins of the synagogue could somehow be saved in connection with the development. Now more than ever, we need to protest as many of its treasures as possible or else risk erasing the very identity of this vital historic neighborhood.

It existed only as a crumbling ruin and now not even as that. (Friends of the Lower East Side lamented the building’s fate as “demolition by neglect.“)  Certainly it will be cleared away so the land can be used for other purposes.  Instead of even the shell of the building living on as a reminder, it will be replaced by something inevitably glass, pretty and sleek.

Pictured at top (and in the images below) — Beth Hamedrash Hagodol in 1979, in photos by Edmund Vincent Gillon.