Serbian Orthodox Cathedral of St. Sava, at West 25th and Broadway, was destroyed in a spectacular and mysterious four-alarm fire on Sunday, its windows shattered in shafts of flame, its ceiling reduced to cinders. If you’re a podcast listener, you may know this place from the show we released just last Friday on the life of Nikola Tesla. Sitting in front of St. Sava is a bust of Tesla, placed there by the Tesla Memorial Society of New York. Or was, I suppose. The bust was either moved orÂ did notÂ survive this catastrophic blaze.

New York has lost an important bit of history. The cathedral was the former Trinity Chapel, an outpost of downtown’s Trinity Church which opened here in 1851 to cater to the elite moving uptown along Fifth Avenue.

The New York Times has a short roundup of some of its most notable events — notably the marriage of Edith Wharton in 1885 and, in 1943, its conversion into an Eastern Orthodox house of worship. The usual fine work of Daytonian In Manhattan highlights the details of its construction. Â “It was, as The New York Times called it in 1914, â€œdistinctly fashionable to be married there.'” 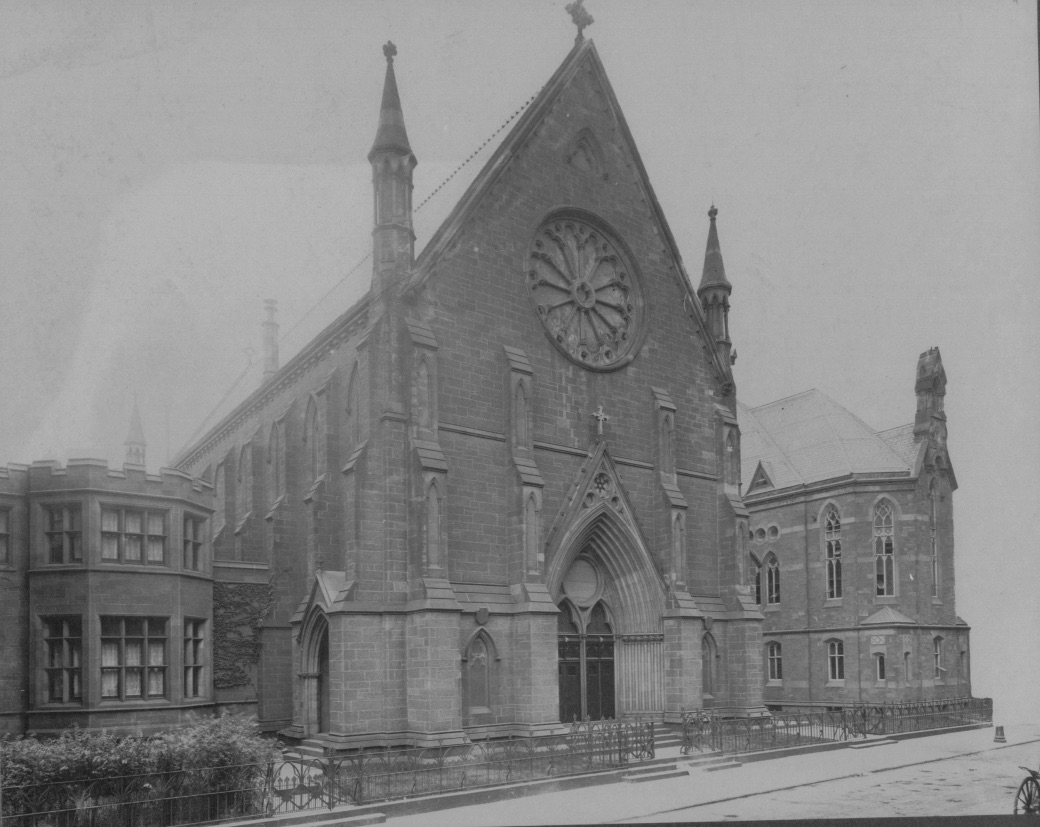 In fact one of the most notorious weddings in New York City history took place here.

Not because of the bride and groom — Mary Amelia Tweed and New Orleans heir Ambrose MaGinnis — but because of the lavish behaviorÂ of the bride’s father William ‘Boss’ Tweed.Â In another strange bit of coincidence, that fated wedding occurred 145 years ago this month, on May 31, 1871. 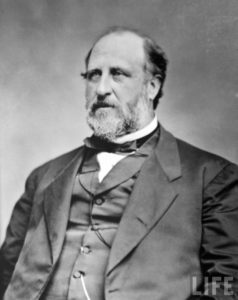 â€œThe streets for blocks around were filled with carriages, while the church was crowded to excess,â€ said the New York Herald the following day. â€œThe center aisle was reserved for the invited guests and presented a most brilliant spectacle.â€

The entire clan was adorned in jewels; â€œthe Tweed family seemed to be a Christmas tree of diamonds,â€ according to author Alexander B. Callow Jr. Tweed wore his famous diamond pin, while his wife sparkled in so many that she threatened to take attention away from the bride.

Almost, that is. For Tweed’s daughterÂ wore, according to Kenneth Ackerman, a “â€˜white corded silk,Â dÃ©colletÃ©, with demi-sleeves, and immense court trainâ€™ with orange blossoms at her waist and, on her bosom, â€˜a brooch of immense diamonds, and long pendants, set with three large solitaire diamonds, sparkled in her ears.â€™”

It was one of the most ostentatious weddings of the post-Civil War era. The reception was held at the Tweed residence at Fifth Avenue and 43rd Street where hallways were filled with rich fineries. But it was the upstairs rooms — filled with wedding gifts — that would be the focus of future query.

From the New York Herald:

â€œTHE WEDDING PRESENTS, which were displayed in one of the upper rooms, must have amounted to the value of over $700,000 and presented an appearance of brilliancy which can never have been equaled in munificence even in this Empire City.Â  They comprised all sorts of jewelry with diamonds enough to stock half a dozen stores; silver sets in profusion and almost everything that the ingenuity of the human mind could suggest in the line of presents.”

In today’s money, those gifts would have been worth over $14 million! This lavish ceremony highlighted Tweed’s extravagance at a time when many began questioning his corrupt hold over city affairs. In particular, the New York Times, Tweed’s biggest enemy, delighted in highlighting the garish cost of the ceremony. “The wedding was a most expensive affair.” 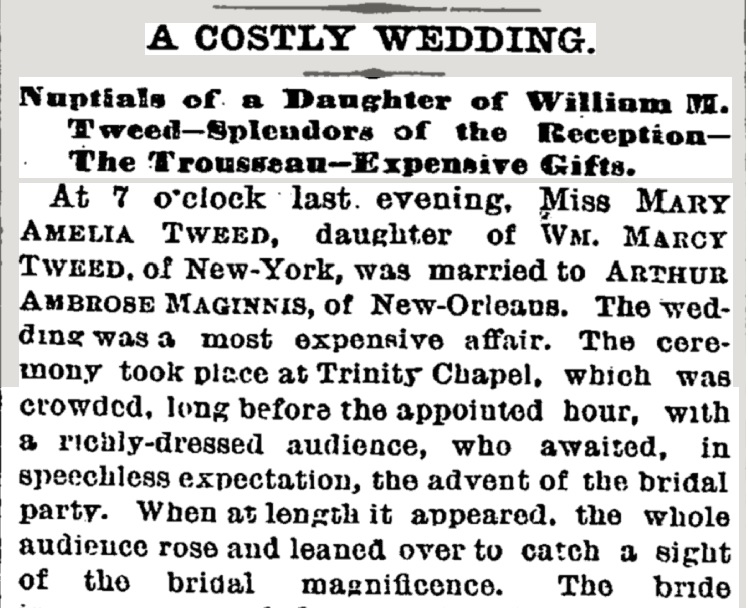 Tweed’s arrogance and extravagance definitely got the better of him, and the wedding at Trinity Chapel would soon become emblematic of the absolute corruption which fueled the city politic of the day.

To select but one example — a 1872 tome byÂ minister Hollis Read called The Foot-Prints of Satan: Or, The Devil In HistoryÂ waxes on for a few pages about the scandalous wedding:

â€œWeddings are often relentless prodigal of lucre.Â  A recent one in our great Gotham has attracted some special attention, both on account of the profuse expenditure, and from the character and position of the parties concerned.Â  It was at the â€˜palatial residenceâ€™ of the redoubtable â€˜Boss Tweed,â€™ and the happy bride was his daughter.Â  Here we shall cease to wonder at the extravagant amounts absorbed in grounds, house, stables; and now in profuse expenditures for the wedding, when we are reminded how the â€˜Bossâ€™ got his money. For here certain unmistakable ‘footprints’ are, if possible, more apparent in the getting than in the spending.”

Tweed and his notorious Ring (including mayor A. Oakey Hall) would be exposed by the summer, and the BossÂ was soon thrown into jail (only to promptly be released on bail).Â He would go to trial for his crimes by 1873 and eventually died at the Ludlow Â Street Jail on April 12, 1878.

For more information on Boss Tweed, check out our podcast on William ‘Boss Tweed and the bitter old days of Tammany Hall.

And here’s a picture of the Tesla bust which I took this past Friday, then the scene at St. Sava as it looked on Monday afternoon. 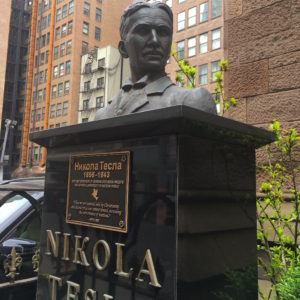 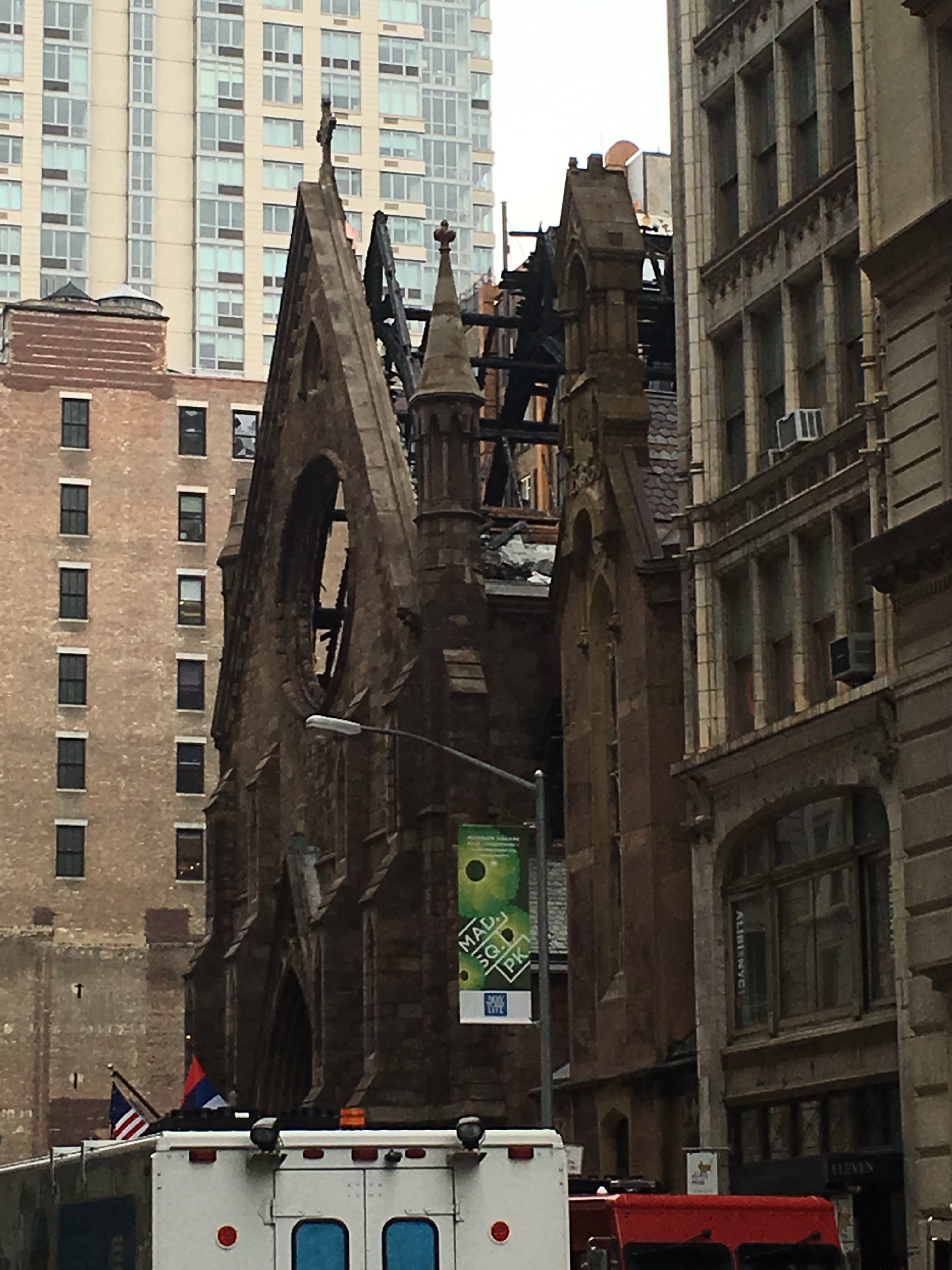 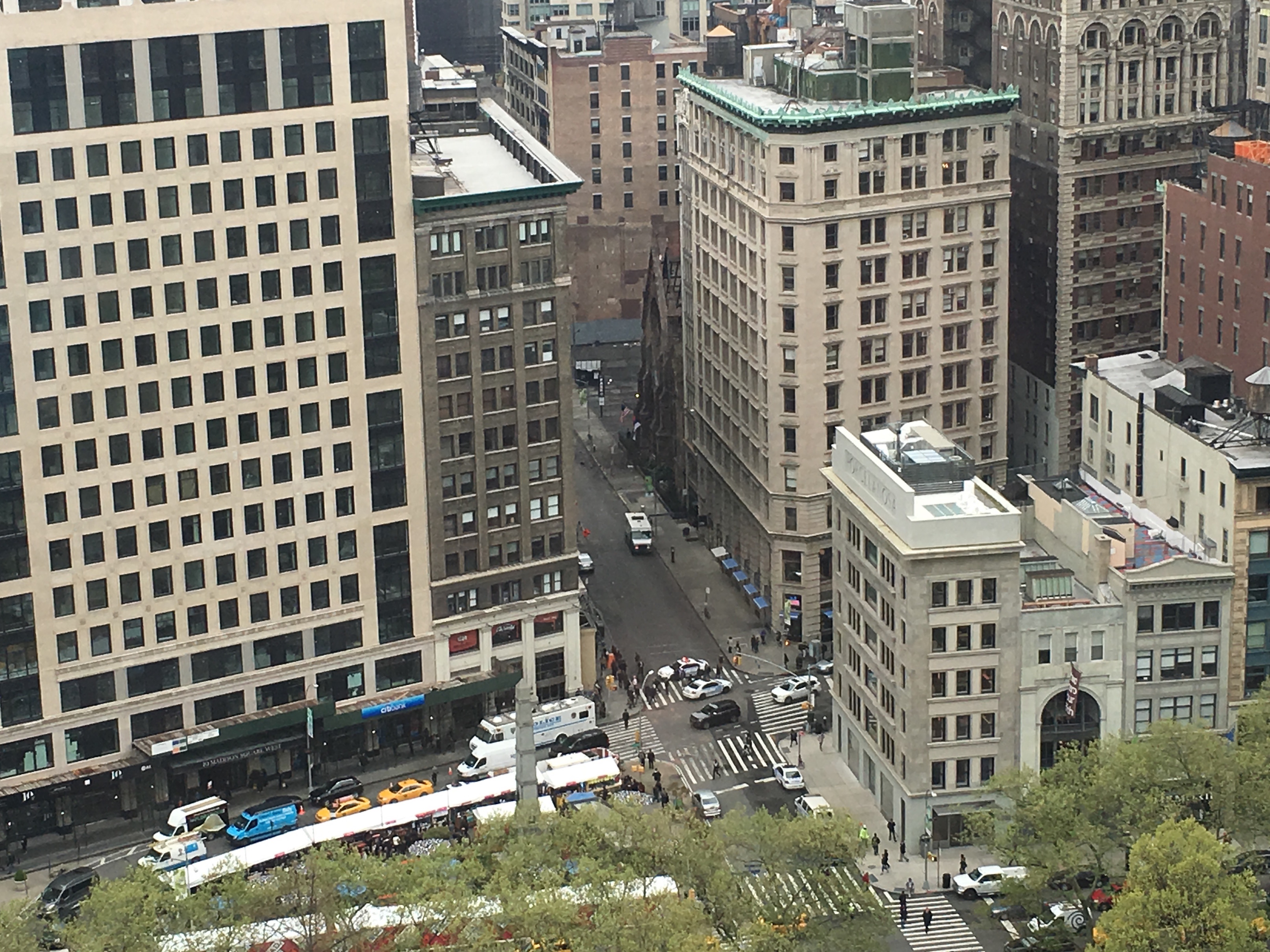 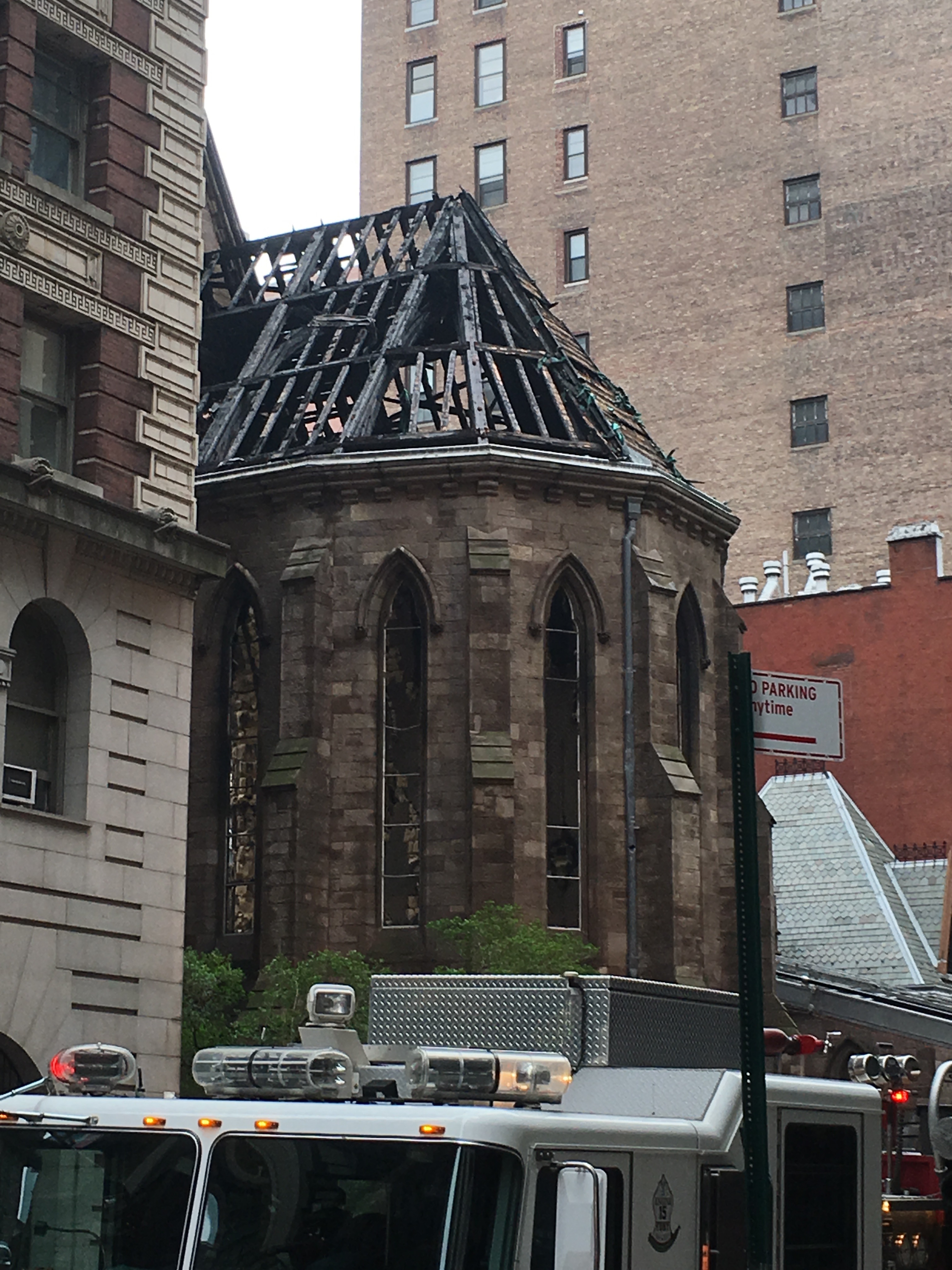 3 replies on “The Boss Tweed connection to St. Sava, the cathedral destroyed by fire”

Great Post.
Please KEEP US posted on the status of the Tesla Statue!!
Hope it has been saved and Hope the Church can be saved, too!

Your post on where Tweed died at the Ludlow Prison (now the Seward Park High School) is most interesting.
This school was notable for poor performing students and an alarming amount of dropouts and was eventually closed in 2006. Five new smaller high schools now share the building. Former â€œinmatesâ€ of this institution include Tony Curtis, Estelle Getty, and Jerry Stiller.- (WERE they all “Poor-‘Peformers’ “?)
Seward Park High School today, a prison for some, built over the site of an actual prison

Your comments about Seward Park High School are inaccurate and mean spirited. Seward served the Lower East Side and many newly arrived immigrant students. Our successful graduates went to Harvard, Yale, MIT, and many SUNY campuses. The downfall of Seward was politically engineered
by the same group that undermined all large campus high schools. What replaced them were inept young principals and schools without libraries, gymnasiums, or the courses needed to serve at risk students. It was a radical take over by those who do not want every child to have a chance through education.

It appears the Tesla statue DID survive the blaze!

We are confirming if has been moved since Monday, stay tuned