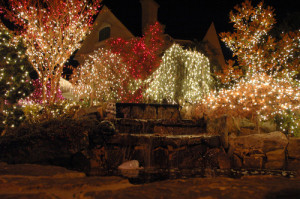 For eleven months out of the year, Dyker Heights is a quiet, unassuming section of Brooklyn, far from the blazing electicity of Manhattan. But every December, it threatens to create its own Times Square in lights.

The “Dyker Lights” has become the unofficial center of Brooklyn holiday festivites, showing up the nation’s suburbias with elaborate, intricately designed Christmas light shows. The main light display in on 84th Street between 10th and 13th Avenues, although several streets on either side have plugged into the festivities. Although you can walk and enjoy them, its best — given the weather and sheer number — to take a car. 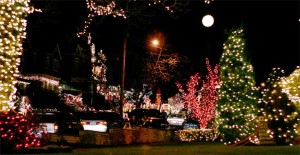 Nobody’s quite sure of the beginnings of the Dyker Lights festivities, though most families have been doing it for generations and real consolidated efforts — corresponding to improvements in electronic Christmas decoration — probably happened in the mid- to late 1940s. Families there have been participating in this ‘friendly’ competition since then, spending the entire year in preparation. The New York Times even features the Marcolinis, who also decorate for Halloween and Easter and this year include a massive mechanical Santa.

Dyker Heights sits on the location of the old Dutch settlement of New Utrecht, founded some 355 years ago, whose most prominent citizens the Van Dykes lend the neighborhood their name. As for the ‘Heights’ part, this is the highest natural point in southern Brooklyn, which attracted developers in the late 19th century. The cluster of Christmas adorned light shows now are mostly attached to turn-of-the-century abodes built by residents lured by developer and salesman Walter L. Johnson.

Today those homes are owned mostly by Italian-American families. According to the Brooklyn Paper, the top four most decorated homes are those of the Spatas, Polizzottos, Rizzutos and the Lambrones!

One of the houses you’ll be passing is of particular historical interest, the Saitta House (below), an exquisite home in the Tudor style that’s listed in the National Register of Historic Places and was a cover model in a 1901 edition of Scientific American’s architecture edition. 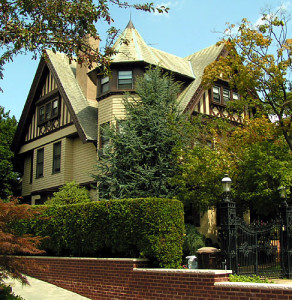 Also of note: Dyker Heights is the home of Scott Baio.

Gothamist has some info on visiting the Dyker Lights. Prepare for some traffic and stop-and-start gawking.