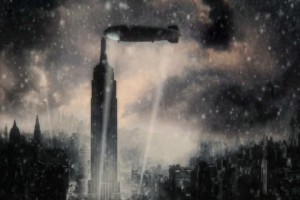 The Empire State Building’s proposed airship dock, as depicted in the movie Sky Captain and the World of Tomorrow

Airships (or dirigibles or Zeppelins, take your pick) were frequent flyers at the start of the century, and naturally many found themselves near or over New York City. In fact this almost defunct form of air travel was nearly (and disastrously) moored to the city’s tallest building.

The air above the city wasn’t as loaded with these flying conveyanes as our run-amok retro-futuristic notions of the city might like to envision. Even in 1911 during what’s considered the “Golden Age of Airships” a single airship above Times Square was enough to make headlines. “250 feet above the lights of Broadway,” proclaims the New York Times, “Frank W. Goodale, a boy aeronaut, in a new dirigible balloon made his third annual night trip to the Times Building through the air last night from the Palaisades Amusement Park, over on the Jersey side.”

And although they look cool in old photographs today, even then they were seen as mostly curiousities, elephants in the sky, compared to the smaller, more extraordinary aeroplanes of Glenn Curtiss and Wilbur Wright, which made their debut on Governor’s Island during the citywide 1909 Hudson-Fulton Celebration. “Aeroplanes fly, Dirigibles fail, in City’s Celebration,” proclaims the New York Press. 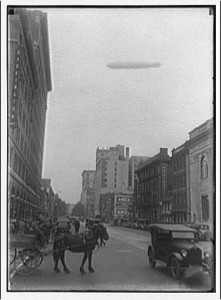 In 1924, the Graf Zeppelin, Germany’s rigid-balloon passenger air liner, made such a splash when it arrived over New York at the end of a 12-day voyage that the Graf’s tenacious commander Dr. Hugo Eckener — “the Magellan of the Air” — received his own personal ticker tape parade through downtown Manhattan in celebration.

The most popular docking station for these massive vessls was the port in Lakehurst, New Jersey. However, in one of the more romantic anecdotes of our most famous landmark, the Empire State Building’s majestic spire was originally designed to dock airships.

With the enthusiastic support of former governor Al Smith, the Empire State opened in 1931 installed with wench and docking equipment and fortified to hold large aircraft in place. He even called in the Navy to assist in the high-profile project.

Modern Mechanix extoled the virtues of this aerial midtown terminal. 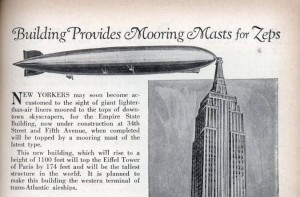 But the Navy was naturally sceptical, as was Eckener, whose Zeppelins would have used the Empire’s mast. The reason, of course, was the massive windgust created by the buildling canyons from so high up, the release of water ballast onto city streets and the deathdefying route in which passengers would have to disembark.

Eventually no more than a couple airships ever docked at the Empire State Building, and those delivered no human cargo, only newspapers, thrown from the dirigible window.

Had things gone Smith’s way, Eckener’s great Hindenberg might have attempted to dock high above the city on May 6, 1937.

Instead, the destruction of the Hindenberg in Lakehurst, New Jersey, on that day drew a curtain on commercial airship service. Most of us remember the extremely dramatic footage of the Hindenberg melting into flame, and that emotional newscaster. What most don’t know is that the Hindenberg was cruising over Manhattan moments before the terrible explosion (below). 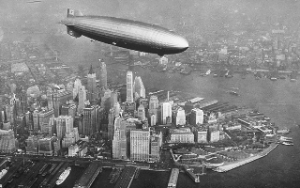 Blimps are still very much an occasional feature of the skies over the city today, mostly over the sports stadiums. The era of the airship is far from over. In fact, out in the Queens neighborhood College Point, location of one of New York’s first airports Flushing Airport, a blimp company is proposing to built the world’s first blimp port. 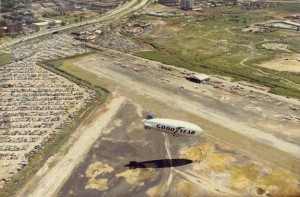 2 replies on “Dinosaurs of the New York skyline”

No German airship besides the LZ126 would ever have been equipped to dock at the Empire State Building. Not the Hindenburg, not the Graf Zeppelin. The high mast was a british design. The German rigid airships only landed on the ground.
Do you actually check your writing for accuracy?
Asking for a friend.