We embark on the tale of the birth of New York City flight — featuring a Wright brother on Governor’s Island, the site of a glue factory turned Brooklyn air strip, Queens’ forgotten first airport, and finally to the baby of mayor Fiorello LaGuardia.

PODCAST TAKEN DOWN TEMPORARILY, WILL BE REPOST SOON!

Wilbur Wright on Governor’s Island, preparing his plane for its historic flight 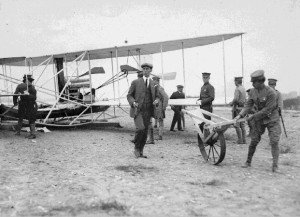 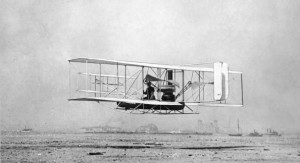 All of New York stood entranced by the waterfront as Wright took to the skies above the city. 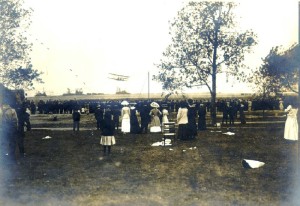 Wright’s first flight only took him around the perimeter of the Statue of Liberty. A voyage a few days later took him all the way up the Hudson River to Grant’s Tomb. 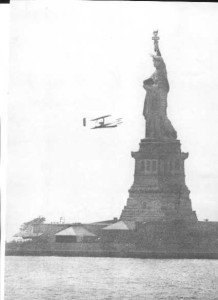 You can find a great many more pictures of Wilbur and his first New York flight at the website First To Fly. For more info on visiting Governor’s Island, go to their official website or check out our podcast.

Before it was Floyd Bennett Field, a pilot named Paul Rizzo took joyrides from a tiny dirt airstrip here. This picture, from 1928-29, is of a 1924 monoplane. That may be Rizzo!

Floyd Bennett Field, too small for the growing size of commercial aircraft, but plenty big enough for the daredevils of early American aviation like Amelia Earhart, Wiley Post and ‘Wrong Way’ Corrigan 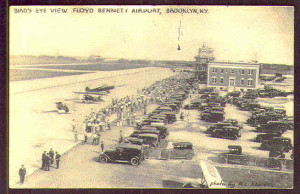 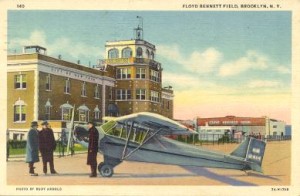 After his deathdefying around the world journey, Howard Hughes is personally escorted from Floyd Bennett Field by mayor Fiorello LaGuardia (Photo by Hulton Archive/Getty Images) 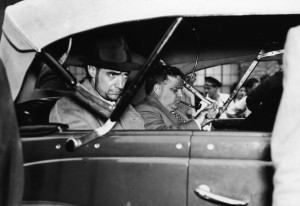 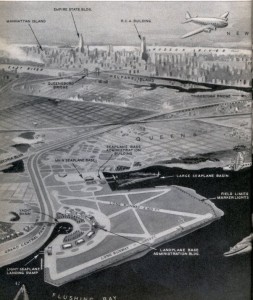 The old central terminal at LaGuardia, circa 1940 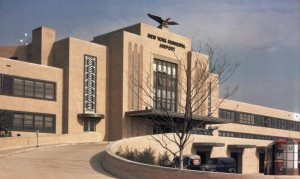 Passengers and crew arrive at a 1947 Laguardia airport terminal 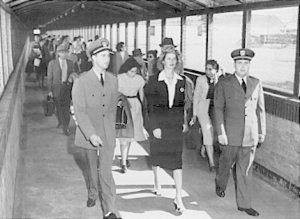 On overhead view of LaGuardia, highlighting its proximity to Rikers Island and the Bronx 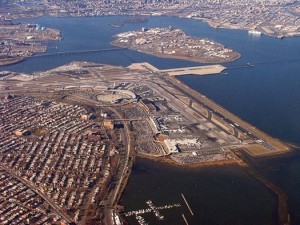 A picture that oozes congestion. From OddballNY 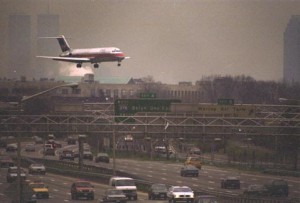 Forgotten New York naturally has some terrific photographs of what Flushing Airport and Floyd Bennett Field look like today.

CORRECTION: I have a massive brain freeze and incorrectly state that the RMS Lusitania was torpedoed by Nazis. Clearly, Nazis didnt exist in 1915. It was however, brought down by a German U-20 submarine during World War I. The corrected version is now available for download.

As a natve NYer and lover of history, I have a few corrections on some of your podcasts. JFK Airport is in Queens, not Brooklyn, as stated in your podcast. New York City was heavily Loyalist during the Revolutionary War, which you can read in The Encyclopedia of New York (so much so that the three delegates to the Continental Congress were at odds with each other- watch 1776). Seurat is pronounced ‘sore-rah’. Katz’s Delicatessen is pronounced ‘cats-ez’. ‘B’hoy’ is pronounced ‘buh-hoy’ and ‘g’hal’ is ‘guh’hal.’ And b’hoys and g’hals were working-class and usually Irish, not middle-class and native (hence the pronounciation). Mose (short for Moses and pronounced ‘mows’) was first seen in ‘A Glance at New York’ in 1848; his girlfriend Lize (pronounced ‘lies’) came a bit later, but was also popular.
World’s Fairs have have always featured industry and have had corporate sponsors of pavilions, going back to the Crystal Palace Exhibition (http://en.wikipedia.org/wiki/The_Great_Exhibition).
The story about Pantone color 1817 being Tiffany Blue is false- 1817 would be in the red, not the blue, range, if it existed at all- which it doesn’t.

Speaking of Flushing Meadows Park- i grew up in Queens. There was roller skating rink set up for year at the New York State Pavilion- my greatest joy as a kid was skating around the perimeter of my home state. The Park is now also home to a site named after another kid who played in Queens- the Arthur Ashe Tennis Center.
The famous words by Nathan Hale are usually reported to be ‘…give my life…’ rather than ‘…lose my life…’. There’s a statue of Hale in city Hall Park, not far from the spot where the now melted-down statue of King George stood.
While four of the Founding Fathers attended Kings College, most of the alumni were Loyalists, as were most of the students.

You do a very good podcast and provide some interesting info- but I have to admit that I sometimes wince when one of you plays dumb or claims to not know something as basic as that Conde Nast was a real person. I realize that most people listening don’t know these things but some of us do, or just know to look things up (like the story of Pantone 1817).

Adding to carpenoctem’s post, not only is JFK in Queens, but the Lusitania was sunk by Germans, but not the Nazis.

Thank you for your corrections, carpe. The moment we catch a major error, we re-edit and re-load the podcast. Other corrections are made and placed on the pertinent blog page. For instance, my ‘German’ flub was reloaded the next day. Thus are the risks you take by doing a weekly audio show I guess!

Any future corrections can be emailed directly to us — boweryboysnyc@earthlink.net.