Above: Central Park’s first recreation was ice skating, almost as soon as the lake was completed in 1858. The Dakota Apartments look like a ski resort.

Frederick Law Olmsted, the brilliant and sometimes testy creator of the Greensward Plan, the basis for Central Park. As America’s go-to guy for park creation, Olmsted helped develop thousands of acres of public space in America, including the grounds of the U.S. Capitol, dozens of college campuses, and parks in Atlanta, Boston, Louisville and Detroit. 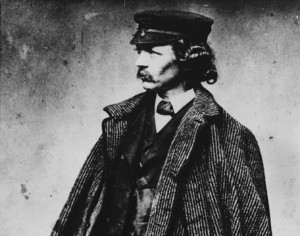 His British partner Calvert Vaux was a genius landscape architect in his own right. He and Olmstead would go on to also create Brooklyn’s Prospect Park. He’s particularly noted for personally designing Central Park’s more beautiful bridges, as well as the fanciful Belvedere Castle. 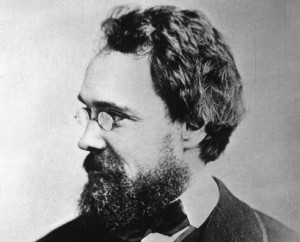 The original design of Central Park, circa 1857, informed by the upper and lower reservoirs and a noticable lack of structures. (Click on map for greater detail.)

From an original sketch of the Greensward plan, by Vaux

A brilliantly rendered lithograph of the Greensward plan (From an exhibit last month Celebrating Greensward.) 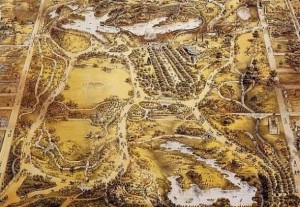 A sketching of some alledged ‘squatters’ in the lands that would eventually become the park. The reality of their situation was oftentimes far more complex. 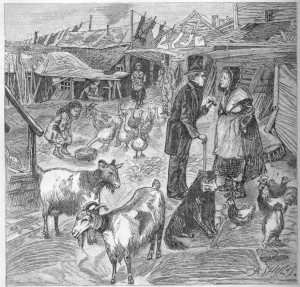 A map of Seneca Village (with Eighth Avenue at top), the small town of African-American property owners that was swept away with the building of the park

A rare photo of some rather unsightly construction in the park, circa July 1863 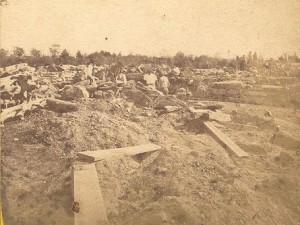 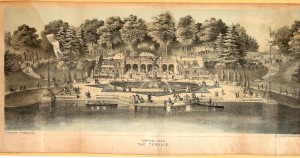 The original plan for Central Park included no monuments, and Olmstead wanted it that way. Still, by 1864, they were already hoisting up a tribute to William Shakespeare. In the picture below, the cornerstone is being laid on the 300th anniversary of Shakesspeare’s birthday, April 23 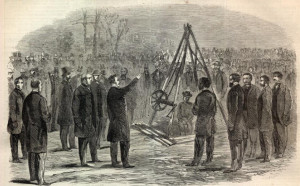 By 1869, the park had been taken over by elite New Yorkers, who could afford to ride through on their carriages. (Click for details of this rich picture.) In the background is the old Arsenal, which tranformed into the Central Park Zoo in later years. 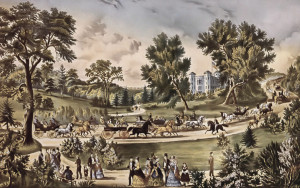 Check out our older podcast on the Central Park Zoo and accompanying photographs.

2 replies on “PODCAST: The Creation of Central Park”

Your fun podcasts get me through all the boring bits of my day. Can’t wait for the next installment of swamp drainage and Robert Moses 🙂
That’s insane about the lack of female statues, by the way!

Speaking of those pictures, I’d like to know if I could use a few of them. I’m developing an iPhone app that guides users on tours of famous sites, and I was wondering if I could use the sketch of Seneca village inhabitants and the picture of “unsightly Central Park construction”.

Please let me know if this is possible, or if I need to contact somebody else.