It’s a mystery! It’s 1841 and the most desirable woman in downtown Manhattan — the ‘beautiful cigar girl’ Mary Rogers — is found horribly murdered along the Hoboken shore. Hear some of the stories of this case’s prime suspects and marvel at the excessive attentions of the penny press.

Also: Edgar Allen Poe takes a crack at solving the case, and who is the mysterious Madame Restell?

NOTE: The sound quality is a little wobbly at first but it goes back to normal after the first few minutes. Sorry!

Many of the events of the story take place around the City Hall area — Anderson’s tobacco shop would have been just to the left of the picture, Mary’s boarding house to the right. (This illustration is actually from 1854, but you get the idea.) 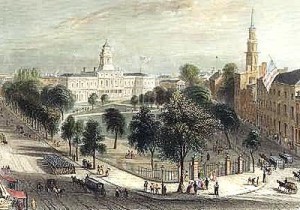 Sybil’s Cave, in an area along the Hoboken shore once called Elysian Fields — it’s here that the body was found … and another gruesome death related to Mary Rogers would occur just a couple month later 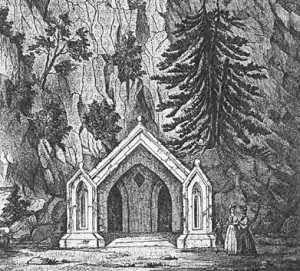 Printing House Square, across from City Hall and mere steps from Mary Rogers’ boarding house, got into the act by printing ever scandalous detail of the murder investigation 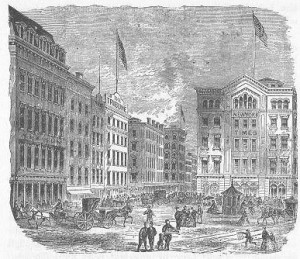 The murder inspired Edgar Allen Poe to write ‘The Mystery of Marie Roget’, changing the names and location but leaving the essential facts intact. But had Poe been paid to write the story by one of the case’s suspects, Mary’s former employer? 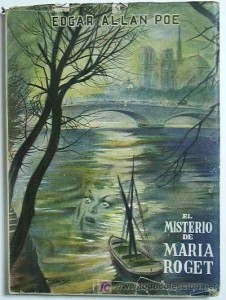 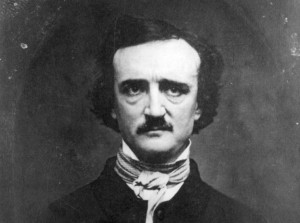 Madame Restell — what role did she play in the disappearance and death of Mary Rogers? 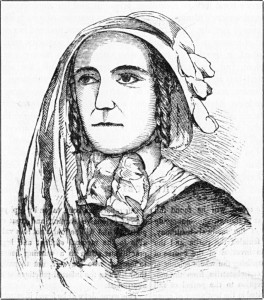 Mary Rogers lived at a boarding house run by her mother that once stood here, just a block from CIty Hall. It was here that Mary met most of the men who later became suspects in the case. 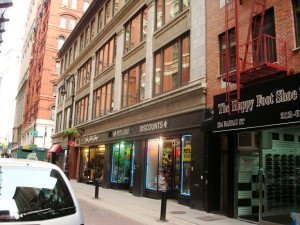 I wrote about Madame Restell back in April over at Scandalous Women. Fascinating woman.

Modern Criminology owes a lot to Poe. In a reading of Marie Roget, you see the first steps in scientific criminal analysis, the Gold Bug, one is a study of code-breaking and Rue Morgue, one can see crime scene analysis first emerging.

From the Libsyn site:

Hello. It’s been a while since I researched this topic (maybe 2 years). It’s nice to see there is alot more information online now. Who killed Mary Rogers? I am trying to find out more information about her mother Phoebe. The account of many writings, she is said to have been very intent on her daughter Mary marrying that upstanding lawyer, Crommelin, who stayed at their Inn for a while. Her mother was dead set against the man Mary was in love with and engaged to, Payne.

In an article pasted below, I find it strange that Phoebe “found” a suicide note and gave it to police. This was at the 1st disappearance of Mary after which she returned and went back to work. It could be possible that Mary & Anderson, her employer, created that hoax to get publicity for his tobaco shop. But would she also involve her mother and scare her just for more sales at the shop? It doesn’t fit the character because she actually eventually conceded (in some stories) and broke off the engagement with Payne because of her mother’s wishes. The mother and Crommelin remained close friends and this was the man Phoebe wanted her to marry for the motive of “upward mobility socially”. The mother seemed to have some narcissistic tendencies that she probably projected onto her daughter and this sort of tormoil can go tormenting and go unseen to the public eye. (reference the books, “Why Is It Always About You?” & “Toxic Parents”). Below is a paste from the article I am referring to. I am continuing to research more into Mary Roger’s Mother as a suspect because something just doesn’t add up with her (in my opinion).

Here is the paste:
On October 5, 1838, the New York Sun reported that “Miss Mary Cecilia Rogers” had disappeared from her home.[2] Her mother Phoebe said she found a suicide note which the local coroner analyzed and said revealed a “fixed and unalterable determination to destroy herself”.[4] The next day, however, the Times and Commercial Intelligence reported that the disappearance was a hoax and that Rogers only went to visit a friend in Brooklyn.[2] The Sun had previously run a story known as the Great Moon Hoax in 1835, causing a stir.[5] Some suggested this return was actually the hoax, evidenced by Rogers’s failure to return to work immediately. When she finally resumed working at the tobacco shop, one newspaper suggested the whole event was a publicity stunt overseen by Anderson.[6]

It’s fascinating to me how many people are still researching poor Mary’s death. It’s an odd story indeed–even odder than Poe made it sound. I wonder if, at this late date, anyone will ever be able to settle the question of how she met her end?

No bother Laura. Happy to unfold somewhat love that is Gaelic . Trust the tunes are currently coming along perfectly.