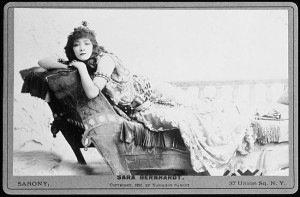 Sarah Bernhardt may be the most famous and most mysterious actress who ever lived and certainly “the greatest celebrity of her era.” Working mostly in the days before recorded medium (there are exceptions), Bernhardt crafted a legend matched by outrageous behavior and provocative stage performance. Naturally, she brought both with her when she came to New York City for her first American tour in 1880 to present the first of many signature roles, Adrienne Lecouveur.

The French actress, lauded as one of Europe’s greatest commodities, didn’t exactly crave a visit to America. Leaving for New York on October 1880, Sarah “was in utter despair, weeping bitter tears, tears that stained my cheek,” according to her autobiography. New York had no such hesitation. When her boat arrived two weeks later into a strangely frozen New York harbor, it was greeted with smaller steamers, filled with fans and decorated with French flags. They feted her onboard in a lengthy, drawn out ceremony of admiration.

Her response? Feeling slightly woozy, “I decided therefore to faint.” She fell gently into waiting arms, people rushed to her attention until “it was time to come to my senses again.”

She stayed that evening at the luxury Albermarle Hotel at Broadway and 24th Street where she blocked her door with furniture to keep other well-wishers and journalists out.

Bernhardt’s auto-biography is so steeped in extremity that you assume she must be exaggerating. Alexandre Dumas did call her a “notorious liar”, but the fact that it took Alexandre Dumas to make that proclamation underscores the exotic circles and experiences in which she traveled. 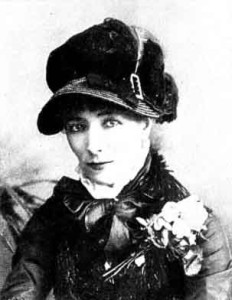 She greatly distrusted the press who she believed willfully printed lies about her (even when the lies were fed to them by Bernhardt’s own management.) At a press conference at the Albermarle later that day, she dismissed even the simplest questions, especially bristling when she was asked about her religion. “Oh Heavens! Will it be like this in all the cities I visit?”

Two days later, she arrived to rehearse at Booth’s Theater, the tony stage built by theatre legend Edwin Booth (John Wilke’s brother) and located near her hotel, at 23rd and 6th Avenue. Her reaction at seeing fans gathered outside to greet her: “These strange-looking individuals did not belong to the world of actors….with their white neckties and their questionable looking hands.”

Inside the theater, she was finally reunited with her 42 trunks of gowns and costumes — briefly and offensively seized by customs, a “chiffon court martial” — and ordered her underlings to open and inspect each container. So horrified was she at the lowly people opening her possessions that she could only grit her teeth and stand in a state of utter mortification. In fact, the experience exhausted her so much that she failed to even rehearse at all that day. 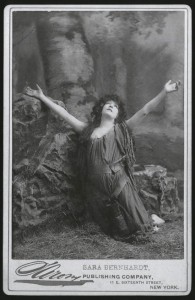 She would later go on to interact with every strata of New York culture, some more friendly than others, appealing more to liberal minded (and daring) social elites than the stalwarts of Mrs Astors storied Four Hundred. Which seemed fine with Sarah; she didn’t want to meet them either.

But for all her condescension that week, for all the superiority and righteousness, there was one thing that stopped her in her tracks. Believe it or not, something actually gave the legendary imperious actress pause.

It was Bernhardt vs. the Brooklyn Bridge, and the bridge won. In 1880, it wasn’t even fully completed, yet in her recollection, it was as if it were bustling with traffic. “Oh, that bridge! … One is proud to be a human being when one realizes that a brain has created and suspended in the air….that fearful thing.” The magnificence of the bridge, its extraordinary scale, filled her with “a strange, undefinable sensation of universal chaos.”

Yet she was able to sleep peacefully that evening, “reconciled with this great nation.” And all it took was for something to make the mighty actress feel small.

She would come many, many times to New York and onward to other major cities. By 1910, her tolerance of America was enough that she endeavored to perform future productions in English. (Up until then, all of her performances were rendered in French.)

I highly recommend peeking into her pompous, overblown autobiography My Double Life (well out of print, although Google Books has a copy to review). Simply flip to any random page and get a whiff of her powerful perfumed prose. They seriously do not make them like Sarah Bernhardt anymore.

Below: the spectacular Booth’s Theatre, where Sarah Bernhardt made her U.S. debut on November 8, 1880. It was located on the southeast corner of 23rd and 6th. Today the building there contains a Best Buy and an Olive Garden. 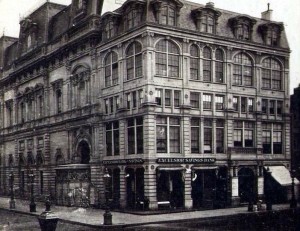 P.S. It appears that Sara and Sarah were interchangable back in the day. You’d think this discrepancy would have driven the poor thing to the fainting couch.

Wow, I had no idea that was the original Booth theater and not the one in Times Square. Thanks for another informative post!

I read on internet that she went in the Chelsea Hotel,
do you think it’s true ?
Thanks
Sophie