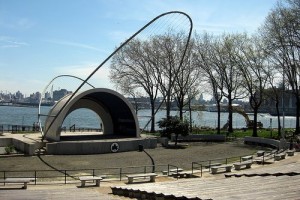 I’ve always been a little fascinated by that small ampitheatre that’s located in Manhattan’s East River Park (near Corlear’s Hook). For years it just seemed so hopelessly abandoned. In the past few years though it’s been making a comeback, featuring the occasional live concert and offering a unique, leafy respite for joggers.

The East River Park is a rather unusual thing, a Robert Moses original from 1939 that features 20 blocks of artificial concrete extension to connect the original land purchase (too narrow to be a useful park) with the East River shore. It’s the largest park in downtown Manhattan, larger in acreage than Battery, Thompkins Square or Washington Square parks.

Among its many Moses staples — ball fields, paved playgrounds and paved picnic areas — is the amphitheater constructed in 1941 as a nod to the neighborhood’s most famous former resident, New York governor Al Smith, who had pursued acting in his youth.

However, nothing much exciting blossomed from its curiously designed proscenium until the late 1950s, which Joseph Papp first launched his series of free Shakespeare performances. That’s right, the Public Theatre’s annual outdoor tradition of Shakespeare In the Park began here — at East River Park, not Central Park.

Once they left uptown for their permanent home, however, things became quite grim for the ampitheatre. By 1973, the city couldn’t even afford to keep it open. It was fenced up, closed down and heavily vandalized. For those living in the city at the time who came upon it, it did in fact seem like a modern ruin, Robert Moses’ very own Acropolis.

The park itself was slowly renovated throughout the 1990s, but relief finally came to the beleaguered stage in December 2001 thanks to, curiously enough, to reality television and Erin Brockovich — the real Brockovich, not the Julia Roberts version.

In the months following 9/11, many restorative projects began popping up throughout downtown. Brockovich, rising to national prominence thanks to the Roberts film, was filming an urban makeover program Challenge America for ABC. Brockovich and her producers chose the amphitheater for renovation, done over the course of a week, using the donated services of Tishman Construction and HLW Architects. Why this place exactly? I’m not sure, but Rudy Guiliani assigned the project to the program during a telecast of Good Morning America.

I didn’t catch the one-shot show, but I’m picturing Ms. Brockovich in one of her signature ensembles directing workman while standing on the stage. Truly one of the stranger stories of renovation that I’ve ever heard.

1 reply on “How Erin Brockovich saved the East River ampitheater”

In the early 1960s, when the East River Park was still a place for family-oriented refreshment and recreation, the LENA (Lower East Side Neighborhood Association) Symphony Orchestra gave a series of Tuesday Night performances of classical music in that amphitheater.

There was also a group that met there regularly for folk dancing.

On one of those nights at the amphitheater (I don’t remember the exact occasion or the date), Eleanor Roosevelt was in the audience. Her presence was announced, she stood briefly, people applauded briefly, and then the performance continued and she was left unmolested. She was accorded that courtesy without there being any need for a huge security detail to protect her.