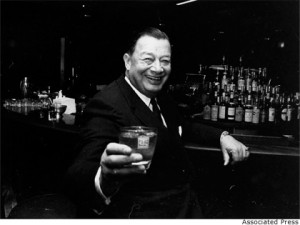 So make it one for my baby, And one more for the road

They really don’t make them like Toots Shor anymore. A stout, gregarious man, back-slappingly friendly with a child’s face, Shor reigned over one of midtown’s legendary martini scenes, his very own eponymous nightspot that attracted the most iconic mad men of music, movies, journalism, and sports. (In fact, Mad Men, the 50s Manhattan throwback TV series, is often set here.) Shor’s was where the world’s most famous alcoholics of the 50s and 60s tippled.

Toots is a bit of a tragic figure today in that he really became a self-branded institution of a simpler time, an old-school, double-breasted nightlife dominated by rich white men. When times became less simple, he foundered and faded.

This Jewish-born Philadelphian made his entry into New York nightlife in the most obvious way for a man of his frame — as a doorman to some of the city’s most famous speakeasies during the dry 1920s. “A kid on the hustle,” in his own words, Shor made 40-50 dollars a week in several places like the Five O’Clock Club and the Napoleon Club, where he would “flatten a guy a day, maybe two.” Along the way, he befriended celebrities and journalists alike; most importantly he also made connections with the influential mafia figures who owned the night spots.

He eventually moved on to a management position in 1936 at a popular tavern owned by Billy Lahiff (158 W. 48th Street), acquiring from his famous clientele the confidence and ease of a celebrity himself. He even married a Ziegfeld girl, nicknamed Baby, who was a virtual pixie next to him.

(By the way, just three years earlier, Lahiff’s served the last meal to Fatty Arbuckle, the embattled silent film star who died in bed that night.)

Shor moved on to his own establishment in 1940. Toots Shor’s Restaurant (51 W 51st Street) would be an instant success, ruling for two decades as the neighborhood lounge for some of New York’s biggest lushes. Most associated with the early years was Jackie Gleason, who would spend the day there drinking, go home and take a nap, then return to Toots for the nighttime crowd.

BELOW: Toots and Jackie and the ground breaking of his second restaurant in 1960 (Bob Gomel, LIFE archives) 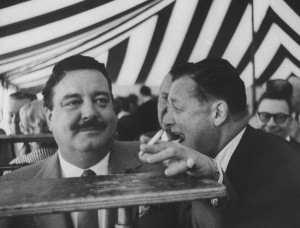 You could eat at Toots — it was a restaurant — but, as the 1996 documentary Toots makes clear, it was all about the “whiskey and beer.”

Shor would befriend many of his clientele, calling them ‘crum-bums’ upon entry, joking with them, creating an inner circle for some of the most closely observed men in New York. In particular, the restaurant was quite popular with sports icons (and, by extension, sports writers); for this reason I would describe Toots as one of New York’s greatest sports bars ever. It didn’t need memorabilia on the walls; the memorabilia just walked in through the front door.

If you were a Yankee, you came to Toots. Mickey Mantle was his most recognizable regular; Joe Dimaggio came in for awhile, until Shor called his wife (you know, Marilyn Monroe) a whore, a slight Joe never forgave.

Bing Crosby and Frank Sinatra would frequently enter to applause. Supreme Court justice Earl Warren would enjoy a drink at one end of the bar, while the most notorious gangster in New York, Frank Costello, would be dining on the other side.

When it wasn’t filled with icons, regular businessmen would hit Shor’s for a lingering martini lunch. Few places in the city fostered such a tightly closed fraternity.

Mickey Mantle and his bespecled wife Merlyn, not exactly the most loving of couples, pull it together for master of ceremonies Toots Short, at right (1965, photographer John Dominis, courtesy of Life archives) 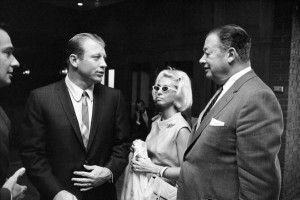 Along the way, Shor became quite well-known, a television star even. (That 2006 documentary features footage from his appearances on ‘What’s My Line?’ and ‘This Is Your Life’.) However his penchant for gambling and comping thousands of dollar of beverages for friends took a toll on his finances. Shockingly, he announced in 1959 that he had sold his restaurant. By the next year, it was demolished.

He tried again in 1961 at 33 West 52nd Street, closely copying his old formula. Some of his old friends even came back. But this type of nightlife was swiftly fading from view in the city. How could Shor coexist in a neighborhood with places like the Peppermint Lounge enticing people with the vibrations of counter-culture? It didn’t help that Shor continued to have financial problems; his celebrity and mafia connections couldn’t help him this time.

His new restaurant was unceremoniously closed in 1971 due to income tax evasion. He tried once more in October 1972 in a smaller place on 54th Street; it was closed within a year. Strapped for cash, Shor then sold his name to the Riese Corporation, who opened a small chain of Toots Shor bars throughout the city. Today, Riese operates such chains as TGI Fridays, Dunkin Donuts and Taco Bell. The bars had nothing to do with Toots, and what’s a Toots Shor establishment without Toots? Eventually the notoriety of his name would soon fade and even those knockoffs would close.

Shor died in 1977, living with his family at the Drake Hotel at Park and 56th Street.

Luckily, Shor is fondly remembered today as a vestige of old midtown Manhattan, a starched precursor to today’s more colorful party promoters. I highly recommend the Toots documentary, lovingly made by his granddaughter. Anybody interested in 1950s New York would be remiss not to spend a few minutes over a stiff martini this weekend in his memory. 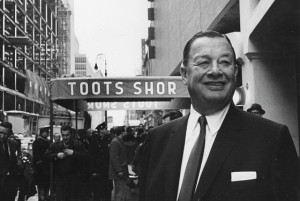 By the way, his real name? Bernard.

Lovely article and very well done.
thankyou,
tracey, the kid with his initials

Very cool! Its sad that people like Toots Shor dont exist anymore! I saw the documentary made about him and he seemed like a hell of a guy. I would give my I-teeth to walk into his restaurant back in the day….

He was from Philly…nuff said.

I enjoyed reading about Toots. Toots Shore was really larger than life. I had the good fortune to grow up with such a fellow … my father was such a man…smart as they come, funny and quick witted and loved by all who were lucky enough to know him. Alfred “Al” Greenhood. He and Toots surely would have been the best of friends.

I am now 60 year old. Never got to meet Toot’s or Jackie, but would have loved to spend an afternoon with both. I have a glass from the original bar and use it (and toast them both) often. This guy was the “real deal” tough, sweet, could keep a secret and down a few brandy’s and soda. I believe these kind of people should not be forgotten. – Jake (from Yonkers)

Never forget people who made that type of history, New York City, Manhattan wishfully will return to having some of that same integrity and honor whether he was a bar owner or not, Toots truly was a master of a period in NYC history. Some super great stories are out about him in his gratitude for making New York – New York. Just love the interior of Toots Shor restaurant with the Knotty Pine walls and indirect lighting so typical of that time period. I just love the city – please keep NYC the arts capitol in theatre, visual arts, clean, education at its best, excellence in restaurants, and as fashionable as it once was !!

great article….Sinatra mentions Toots on the Sinatra at the Sands Hotel live CD and I just had to find out more about him….I am a rat packer

My dad, when he played for the NY Football Giants, frequented Toots Shor’s restaurant with team mates. On one occasion in 1963 my parents sat a table with Giant great Alex Webster, his brother Jimmy, his wife, and Dorothy Killgallen. My mom loved the Toots Shor ashtray so Killgallen grabbed it and stuck it in my mom’s purse, telling her that everyone takes these home. We still have that ashtray today. My dad said it was always a sight to see the Giants and the Yanks as well as famous actors at Toots Place.

Love this article. I’m 78 years old and miss Toots Shor’s original club/restaurant, Mama Leone’s, and other places of the 1950’s-60’s in NYC–which I have visited from time to time, never having long-time residence there.
A Southern Boy

I remember eating at mama loonies in the 60’s. Spaghetti was dry so I asked for extra sauce. I was on a class trip from Pittsburgh pa. (Chaperoning). I am now 82 years young. !!!

Toots Shore’s restaurant is so crowded nobody goes there anymore.” Yogi Berra

I was a kid , and my dad would take me there , I remember the big bar , and a bartender named Jimmy.

My dad brought us here in the early 60s. I remember it and Toots was gracious enough to say hello to us. My grandfather was a businessman who regularly busted the restaurant in the early days.