We’re going back to school with one of New York’s oldest continually operating institutions — Columbia University. Or should we say, King’s College, the pre-Revolution New York school that spawned religious controversy and a few Founding Fathers to boot. Listen in as we chart its locations throughout the city — from the vicinity of Trinity Church to midtown Manhattan. And finally to its permanent home on the ‘Academic Acropolis’ in Morningside Heights.

WE MADE A COUPLE REVISIONS AND A CORRECTED VERSION OF THE SHOW IS NOW UP!

Freshman Years: The King’s College campus in 1770, along Park Place overlooking the Hudson River. Things would not be peaceful for long on this quiet campus; several students, including young Alexander Hamilton, would join the fight for independence from England. The school would close in 1776 and become a military hospital. 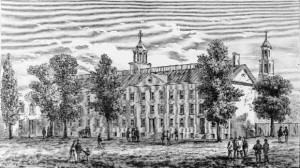 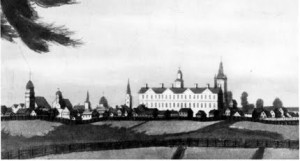 Believe it or not, this is the corner of 49th Street and Madison Avenue, site of Columbia’s campus during most of the second half of the 19th Century. It moved into a space formerly inhabited by the Institute of the Deaf and Dumb. Curiously, when it would move uptown in 1897, it would take over property held by the Bloomingdale Insane Asylum. 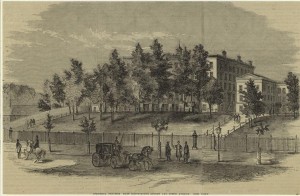 The same campus, in a photograph from 1882. The encroaching growth of the city northward seems to have taken a toll on the campus grounds. Columbia would move from midtown fifteen years later. 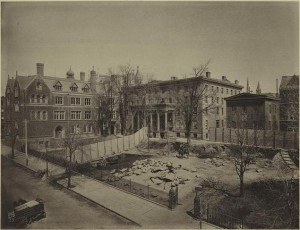 Frederick Augustus Porter Barnard, president of Columbia (back when it was Columbia College) from 1864-1889. In addition to bringing some prestige to the institution, his forward-thinkinig philosophies regarding education for both men and women eventually led to the formation of Barnard College. 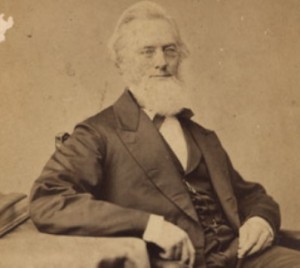 Good Morning: The new campus slowly rises from Morningside Heights with the already completed Low Memorial Library in the background. When this photo was taken in 1897, there was little real development in the area, and it was barely even serviced by public transportation. McKim, Mead and White would turn the area into a veritable classical city. 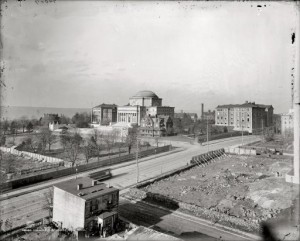 The Low Down: The Low Memorial Library was constructed under the tenure of Columbia president Seth Low. However the building is named not for Seth, but his father Abiel Abbot Low, a successful Brooklyn silk merchant. The library is probably one of McKim, Mead and White’s most beautiful existant works in the city. It’s not, however, a library any more. 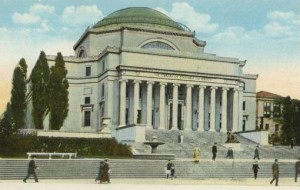 Nicholas Murray Butler, arguably the most influential (and controversial) president in Columbia’s history, presided from 1901 to 1945, overseeing vast growth and prestige for the school. 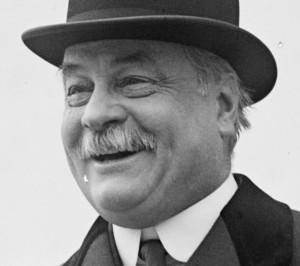 1 reply on “Movin’ on up: from King’s College to Columbia University”

This was a wonderful podcast. Thank you so much and really learned so much and enjoyed it. I take students there every year and you helped me be a better teacher.