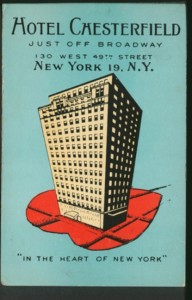 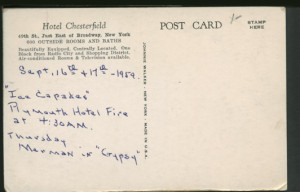 The Hotel Chesterfield (130-136 West 49th Street), built in 1927, was a luxury accommodation conveniently near Rockefeller Center and various Broadway theaters.

The Ice Capades referred to in this card are the well-reviewed Ice Capades program launched at Madison Square Garden. The Capades were a colossally cheesy ice extravaganza featuring music and elaborate production numbers staged upon a skating rink. The Capades played the Garden for decades, eventually dying out by the early 1990s.

The fire at the building across the street, the 18-floor Hotel Plymouth (137-143 West 49th Street), probably wasn’t severe. It was built in 1929 and often hosted stars from nearby Radio City Music Hall. Neither the Plymouth nor the Chesterfield are still standing today — demolished, in fact, to make way for a couple severe, International Style structures owned by Rockefeller Center.

At least this visitor got to see something truly historic, at least in the annals of Broadway history — Ethel Merman in her classic performance in ‘Gypsy. 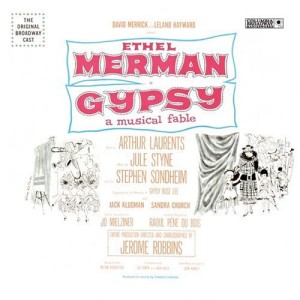 AS AN 16 YEAR OLD TEENAGER I WAS A FREQUENT VISITOR AT THE MAYFLOWER AS MY AUNT RESIDED THERE FOR MANY YEARS. I ALSO HAD THE SUMMER JOB IN 1954 OF WORKING THE NEWSSTAND IN THE LOBBY AND WAS EXPOSED TO MANY OF THE RESIDENTS WHO BECAME CUSTOMERS AT THE NEWSSTAND AND DID NOT KNOW THAT THEY WERE AMONG SOME OF THE HOI POLOI OF THE CITYS SOCIAL CROWD.
MY MOST MEMORABLE MOMENTS CAME AS THE SUMMER WAS COMING TO ITS END AND I WAS ASKED IF I COULD STAY AT THE NEWSSTAND UNTIL THE END OF OCTOBER, WHEN THE PEOPLE WHO
GAVE ME THE JOB SAID THAT THEY HAD SOMEONE TO TAKE OVER THE JOB AT THAT TIME. AS I WAS STILL AT SCHOOL MY HOURS WERE CHANGED TO ACCOMMODATE THE FLOW OF THE NEWSSTANDS HOURS. THE PERSON THAT GAVE ME THE JOB TO BEGIN WITH WAS A MRS. B. JONNARD, WHO WAS ALWAYS AVAILABLE IF NEEDED. WELL AS A BONUS FOR STAYING SHE GAVE ME TICKETS TO THE WORLD SERIES GAMES AT THE POLO GROUNDS AS THE NEW YORK GIANTS WERE GOING TO PLAY THE CLEVELAND INDIANS FOR THE CHAMPIONSHIP.
DURING THE COURSE OF THE SUMMER WE HAD TALKED BASEBALL SEVERAL TIMES AS SHE HAD TOLD ME THAT HER HUSBAND HAD PLAYED FOR THE GIANTS DURING THE WAR YEARS AND HIS BROTHER ALSO PLAYED WITH THEM AT THE SAME TIME; ( 1943,44,and 45 ); I HAD MENTIONED THAT I WAS A YANKEE FAN AND AN AVID ONE AT THAT.
WELL THE TICKETS WERE A WELCOME GIFT BUT I HAD NO IDEA HOW MUCH OF A GIFT IT WAS. THE FIRST GAME WAS A SCHOOL DAY BUT THAT WOULD NOT KEEP ME AWAY FROM THE BALLPARK. AS I ENTERED THE POLO GROUNDS I GOT THIS WIERD FEELING OF BELONGING, I WAS THERE TO ROOT ON A NEW YORK TEAM AND THEN
I WAS BEING LED TO MY SEAT BY AN USHER AND THOUGHT HE WAS
TAKING ME OUT OF THE PARK AS HE WAS HEADING ALL THE WAY DOWN TO THE FIELD LEVEL, SHOWED ME MY SEAT AND I WAS ECSTATIC TO SEE I WAS IN THE THIRD ROW RIGHT BEHIND THE GIANT
DUGOUT; AND EVEN BETTER WAS THE PEOPLE IN FRONT OF ME WAS
THE ACTOR DANNY KAYE AND MRS. LEO DURCHOER. THE WIFE OF THE GIANT COACH, LORRAINE DAY. THERE IS SO MUCH MORE OF THIS STORY TO BE CONTINUED IF INTERESTED

Hey! That’s an amazing story! I’d love to hear more. I’m a huge baseball fan and particularly knowledgeable about many players and figures, including Leo.

I remember being in the Chesterfield hotel in either 1963 or 64 for a few days with my mom and stepdad. We were on the tenth floor. I remember using the elevator an buying a Hershey’s candy bar. I was 7 at the time. I also remember that you could only watch one of their TV’s at certain times. I guess rooms shared TV’s. I didn’t know the hotel would soon be gone