This post will definitely require you to click on the picture below to give it a closer look, and it’s a fairly large picture. This is the Hammonds 1910 map of “New York City and vicinity.” Give it a close look and observe the things the mapmaker thought worthwhile to highlight.

— It’s clear that just 12 years after consolidation, the mapmaker still thought “New York City” meant just Manhattan, much of Brooklyn and virtually nothing else. (Queens is actually blocked out to give a detailing of the most fashionable area of town — Broadway, between Union Square and 42nd Street) In fact, it’s not even all of Manhattan, just the mostly inhabited parts below 76th Street

— Staten Island, the Bronx. What are they?

— The Met Opera House was still standing down on 40th Street but it was becoming a crusty, old relic. Several years later, the quest to build another opera house led to the incidental development of Rockefeller Center — which is obviously not on this map (though St. Patrick’s, across the street from it, is indicated)

— Welfare Island (future Roosevelt Island) is displayed in all its glory, with its workhouse, penitentury and ‘charity hospital’

— The Masonic Temple, Grace Church, the Astor Library and the Battery Park Aquarium are given particular prominence.

— Observe the congestion of ferry lines between the Lower East Side and Williamsburg. 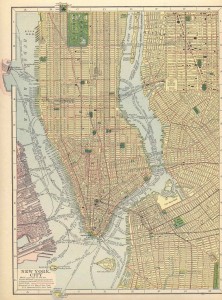 * There was a “City Park” at the southwest corner of Navy Yard. I think it’s still there but never noticed it.

* Railways were important. There was a special corner carved on the left just for the West Shore RR Station, and there was the Long Island RR Station.

Things that had changed ever since:

* There was no BQE. (If it were to be built today, all the anti-development people will scream. (Well, the street grid made much more sense back then.))

* All the convoluted blocks between Williamsburg and Greenpoint have yet to be turned in McCarren Park. (If it were to be built today, all the anti-development people will scream.)

* The whole island outside the Navy Yard was destroyed to make way for longer piers.

* The whole coastline had been streamlined. No more piers.

* Manhattan Bridge had yet to be built. Tons of blocks had yet to be eradicated to connect it to Flatbush Ave. (The map marked it in dotted line.) (If it were to be built today, all the anti-development people will scream.)

* Nobody cared about Times Square, especially since the Met Opera House moved.

Pak-Kei mentions the outlines for where the Manhattan Bridge would go. Interestingly, and it slipped my notice, but the bridge just had its 100th anniversary. It opened on Dec 31, 1909, so it apparently was built and open to traffic at the time this map was produced, assuming this map is from 1910.

OK, a few more bridge items: the Q-Boro was listed as the Blackwell’s Island Bridge, and the W-Burg was listes simply it seems, as Bridge #2.

I’m interested in Martin Terrace, just north of the old MSG and Fort Columbus on Governor’s Island. Can’t recall ever hearing of either.